Pathology companies that made bumper profits from the public funding of coronavirus tests are putting pressure on the federal government to keep paying them $85 a swab for another 18 months.

Each test costs the companies $51 to complete, a public pathology group estimates. 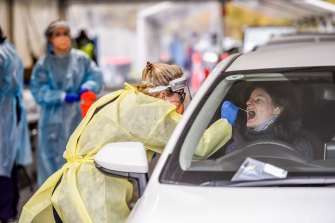 Forty-four million coronavirus tests had been carried out across Australia since last March.Credit:Joe Armao

Public Pathology Australia chief executive Jenny Sikorski said: “They have been making these huge profits out of COVID.”

The $85-a-test subsidy ends on December 31 and the pathology industry – a donor to both the Liberal and Labor parties – says the fee must continue into 2022 and potentially longer.

The $85 fee was set early in the pandemic after pathologists threatened to walk away from COVID-19 testing if they were not paid more. The fee has helped private firms earn at least $1.6 billion from Medicare since March, 2020, the Health Department said.

The fee at its current level should go on “for the next 12 to 18 months”, said Michael Dray, president of the Royal College of Pathologists of Australasia.

“Australian pathology has responded to the needs of the community and has rapidly developed testing capacity on a massive scale to help manage the pandemic,” said Dr Dray. “Testing on this scale over a prolonged period of time is very resource-intensive.”

Australia’s coronavirus testing regime has been recognised as one of the most effective and accurate in the world, and most experts contacted for this story noted the pathology companies deserved to be rewarded for their work. All also said it was time the Medicare benefit was scaled back.

Public Pathology Australia, which represents labs run by the public sector, argues it would be unfair to continue funding the tests at the same rate for private firms, given the windfall gains it has handed pathology companies. Public labs get just half the Medicare rebate that private companies receive.

Ms Sikorski said: “[The private firms] centralise all their testing in the metropolitan areas, so it should not cost them the $85 they are getting as reimbursement from the Commonwealth.”

Health Minister Greg Hunt must decide shortly whether to continue funding the Medicare fee at the same rate or to drop it. The federal Health Department said in a statement the Commonwealth was “currently considering appropriate Medicare arrangements for COVID-19 pathology testing in 2022”.

Pathology labs got an extra $557 million in June’s federal budget for COVID-19 polymerase chain reaction, or PCR, testing – the type of swab done at hundreds of drive-through and pop-up clinics across the country.

Before the pandemic, private pathology labs got about $28 per PCR test to check, using identical processes, for a range of other illnesses.

Labor MP Mike Freelander, who worked for decades as a paediatrician before entering Federal Parliament in 2016 and is deputy chair of a federal parliamentary health committee, said payments for the test should be reviewed.

Dr Freelander said that during his medical career, before the pandemic, he ordered “thousands and thousands” of the same sorts of PCR tests being used by pathologists to provide a coronavirus diagnosis. “These tests are automated, and the companies are now making very large profits,” he said.

He said the pathology companies had provided an excellent and crucial service to Australians throughout the pandemic, but it was time to reconsider both the level of funding for coronavirus tests, and the wider use – and potential public funding – of rapid antigen testing, which provides a diagnosis within 15 minutes.

Australian Pathology is the umbrella organisation representing private pathology companies including Sonic Healthcare, Healius and Australian Clinical Labs. All have seen their share price rise during the pandemic.

Australian Pathology chief executive Liesel Wett said her members had been expecting a cut to the coronavirus testing fee and had been “engaging in discussions on that point, to ensure we don’t discourage the need for testing in the community”.

Australian Pathology president Mark Neeham, an executive with Healius who was also state director of the Liberal Party in Western Australia from 2005 to 2008 and in NSW from 2008 to 2013, did not respond when contacted for comment.

The next biggest private pathology provider, Healius, tripled its after-tax profit to $148 million.

Early in the pandemic, before the federal government put the new rebate in place, private pathology companies endured a plunge in demand for other pathology services.

Forty-four million coronavirus PCR tests had been carried out across Australia since March 2020. Most have been done on the eastern seaboard, with 20 million in NSW, 14 million in Victoria, and 5 million in Queensland. About 175,000 people, or 0.4 per cent, tested positive for coronavirus.

The Grattan Institute’s Stephen Duckett said: “When the state government said to the hospitals at the start of the pandemic, you’re going to jump, they said ‘How high?’ ” Of the $85 coronavirus testing fee, he said: “When the Commonwealth government said to the pathology providers ‘You’re going to jump’, they said ‘For how much?’ ”