Peru has its third president in just over a week after its ex-leader was ousted from office and the country spiraled out of control as protesters clashed with police, who killed two university students.

Francisco Sagasti donned the red and white presidential sash as he was sworn in by lawmakers on Tuesday. In his first words to the Andean nation he paid homage to Jack Pintado, 22, and Jordan Sotelo, 24, who died from gunshot wounds suffered during a protest Saturday night in Lima.

‘We can’t bring them back to life,’ he said. ‘But we can stop this from happening again.’

The 76-year-old engineer, who once served as chief of the strategic planning division of the World Bank, also vowed to restore trust in government after the worst constitutional crisis in two decades. 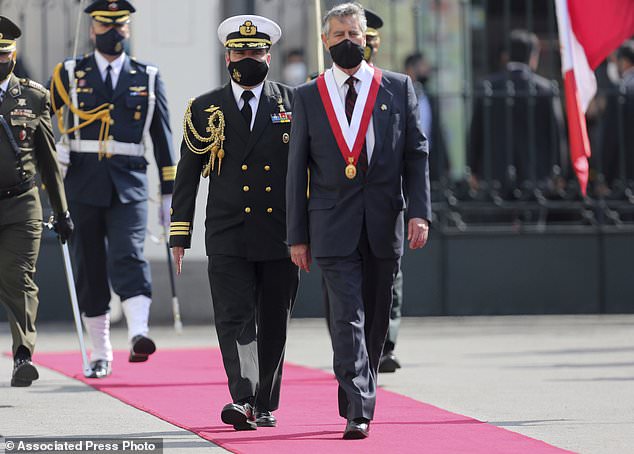 Francisco Sagasti (center) was sworn in as the new interim president  in Lima, Peru, on Tuesday. Sagasti is the second interim leader appointed since last Tuesday, one day after Manuel Merino replaced former President Martín Vizcarra, who was impeached and voted out of office by Congress 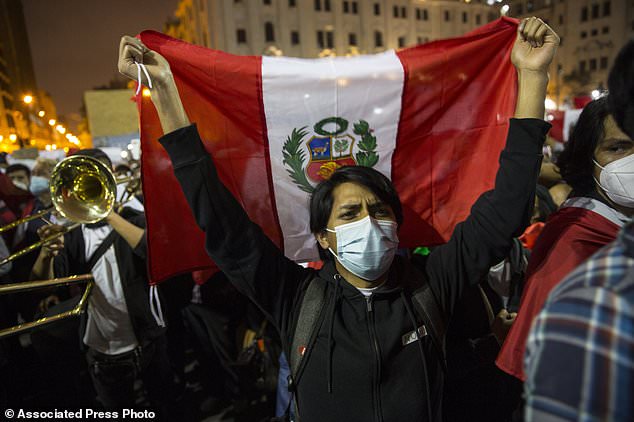 A man holds a Peruvian flag in San Martin square after Peru’s new interim President Francisco Sagasti was designated by Congress to lead the nation, in Lima, Peru, on Monday 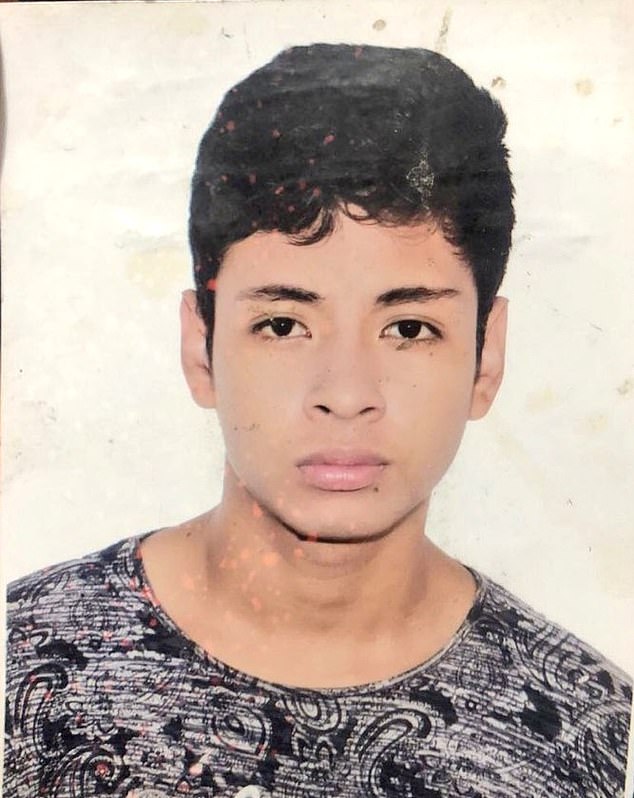 Agents from the Peru National Police shot and killed university student Jack Pintado on Saturday night in Peru as residents took to the streets to protest the removal of former President Martín Vizcarra last Monday. Pintado was struck by 11 lead bullets in the face, head and chest

In Lima, many were cautiously optimistic the elder statesman could steer the country back to stability. But Sagasti has a steep road ahead in healing Peruvians´ deep mistrust in government and working with Congress, which has pushed out two presidents in four years.

‘In my 63 years I’ve never seen a good president,’ said Victor Mezzarina as he stood outside Congress offering to exchange the Peruvian currency, the sol, for dollars. ‘I hope this one is different.’

The move angered residents who filled the streets and protested the move as a parliamentary coup. Legislators swore in Manuel Merino, a little-known politician  who served as Congress’ president, as the country’s interim leader. But Merino, a farmer, resigned five days later after most of his Cabinet resigned and the demonstrations turned violent. 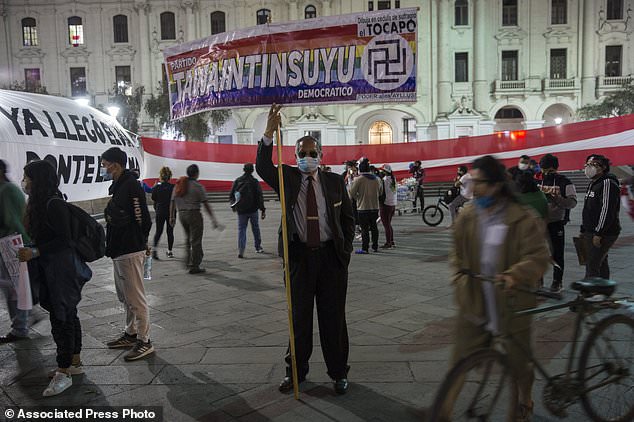 People gather in San Martin square after Peru’s new interim President Francisco Sagasti was designated by Congress to lead the nation, in Lima, Peru, on Monday 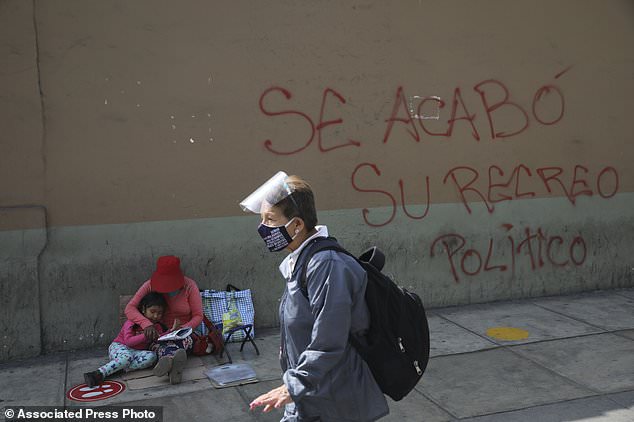 Graffiti written on a wall reads in Spanish ‘Your political recess is over,’ as Marta Perez teaches her 4-year-old daughter Diana Valentina to read as she sells candy near Congress in Lima,Peru 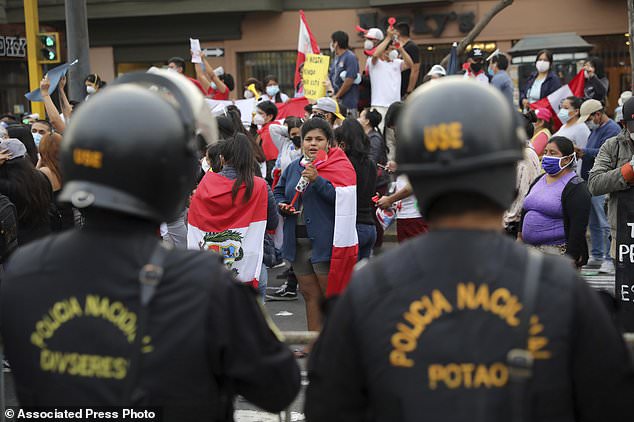 People celebrate in the street after Peru’s new interim President Francisco Sagasti was designated by Congress to lead the nation, in Lima, Peru, on  Monday

For more than 24 hours Peru had no designated president.

An engineer by training, Sagasti by default becomes Peru’s president because Merino had no vice president – making him next in line.

He is a respected scholar whose works include a book titled, ‘Democracy and Good Governance.’ In 1996, he was among those taken hostage by Tupac Amaru rebels at the Japanese ambassador’s residence in Lima.

Sagasti’s reputation as a consensus builder makes him an apt choice for the moment, said Michael Shifter, who is head of the Inter-American Dialogue think tank and knows Sagasti.

‘He always had ideas about trying to build bridges in Peru,’ Shifter said. ‘That’s what he really stood for.’

The centrist lawmaker spent the initial hours after being voted in as head of Congress Monday visiting hospitals where injured protesters were recovering and promising to do everything in his power to restore trust in the government.

‘We will do everything possible to return hope,’ Sagasti said.

A biography on Sagasti’s website says he works while listening to classical music, has been married three times and keeps a piece of cardboard from a box of mineral water with the signatures of his former Tupac Amaru captors on a wall.

‘It was an interesting experience,’ he says of his captivity in the text.

Still, for many Peruvians he is a relative unknown, one more in a steady succession of presidents drawing frustration, confusion and anxiety.

The man Peruvians elected in 2016 – Pedro Pablo Kuczynski – was supposed to be in power until 2021. Instead, repeated corruption scandals and strong arming by Congress has brought the nation four leaders before the term expires.

Outside Congress, about 100 protesters shouted the names of Pintado and Sotelo.

‘The bloodshed will not be forgotten!’ they yelled. 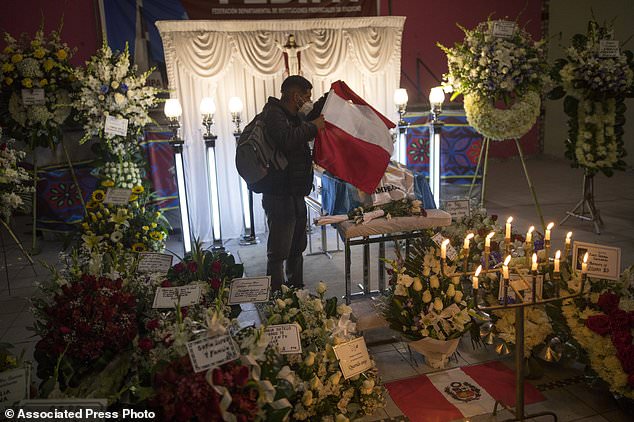 A man puts a Peruvian flag on top of the coffin of Jordan Sotelo during his burial in Lima, on Monday. Sotelo was one of two university students killed by the police during protests Saturday 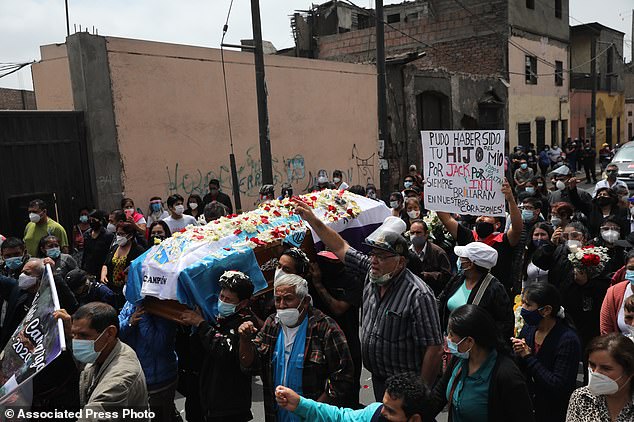 People carry the coffin of Jordan Sotelo, a student who died during Saturday’s protests against lawmakers’ removal of former President Martin Vizcarra, during his funeral procession to a cemetery in Lima, Peru, on Monday

Sagasti voted against Vizcarra’s ouster – a move likely to win him at least some backing from those who took to the streets in protest. Unlike Vizcarra, he also has a party representing him in Congress. Analysts believe the legislature will still try to stymie any major reforms – particularly to combat corruption – but will have a harder time removing him.

Lawmakers used a 19th century-era clause to oust Vizcarra for ‘moral incapacity,’ accusing him of taking bribes years ago when he was a governor. Vizcarra denies the allegations. The country’s highest court is evaluating whether Congress acted legally. Their ruling is not retroactive but could have an influence going forward.

For many, the ordeal was a blatant display of why Peru’s political system need reform. Congress is full of small, fractured political parties. Many of the politicians have little experience – and about half are themselves are under investigation. But they also wield enormous power and can oust the president with a two-thirds majority vote.

Every living former Peruvian president is being investigated or has been charged with corruption. And yet, despite the turmoil, the country has been one of the strongest economic performers in Latin America. The pandemic, however, has thrown Peru’s economy upside down. The International Monetary Fund projects a 14% decline in GDP this year.

‘I think this is the end of that kind of coexistence between dismal politics and sound economy,’ Shifter said.

As she perused the tabloid headlines Tuesday, Ana Lizardo, 61, said she was cautiously optimistic that Sagasti might be a break from the past.

”At my age I’ve seen many presidents and they’ve all been corrupt,’ she said. ‘I hope he’s better.’