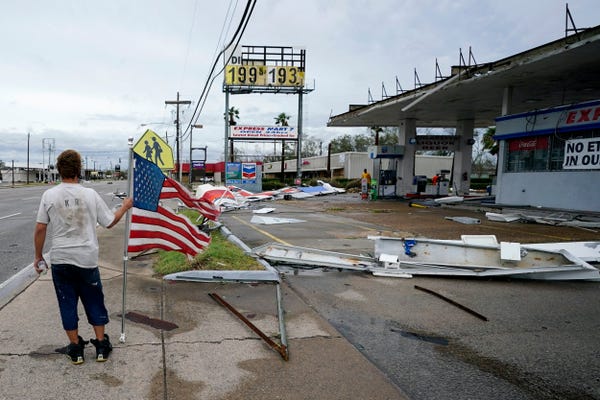 Hurricane Laura made landfall near Cameron, Louisiana, as a Category 4 storm early Thursday.

It battered the coasts of Louisiana and Texas with 150 mph winds and massive storm surges, with the National Hurricane Center tweeting just after 1 a.m. CT that "potentially catastrophic impacts will continue."

People braved the storm to take photographs of the damage Laura was causing: mangled telecommunications towers, an RV being buffeted by strong winds, and windows of a hotel giving way.

As the sun rose, people emerged from their houses to take stock of the wreckage Laura had left in its wake.

Footage on social media showed houses and cars submerged underwater; hotels and other buildings — including the Capital One Tower in Lake Charles, Louisiana — were missing roofs and windows; and signs had toppled over at debris-ridden gas stations.

Elsewhere, homes had been gutted, their insides strewn all over sidewalks after the heavy winds and flooding.

Trees were uprooted and billboards were shredded.

Downed powerlines created a safety hazard while hundreds of thousands were left in the dark.

The force of the storm also upended boats and sparked a chemical plant fire.

This story is developing. Check back for updates.