A tiny Dachshund went into a yelping meltdown when it encountered a turtle for the first time.

Staff at Long Long Ranch in North Bay, Ontario, watched in bewilderment as five-year-old sausage dog Pi wildly scampered around the motionless turtle in circles, daring to inch closer with each lap.

Posting footage of the encounter, they said: ‘Pi the Queen of Long Long Ranch discovers a turtle friend and her mind is blown.’ 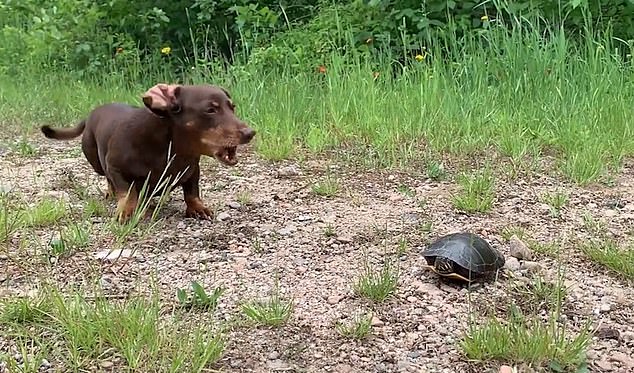 Pi, of Long Long Ranch in North Bay, Ontario, barks madly at the turtle which lays motionless on the ground

The video shows Pi tentatively approach the reptile, which has retreated into its shell with only its head visible.

The hound barks and wags her tale ferociously, cocking her head forward and then quickly backing away as if she is expecting the turtle to suddenly lash out.

Pi then begins to loop around the unfamiliar creature, frantically shuffling her hind legs around in a circle while keeping her eyes locked on to the turtle. 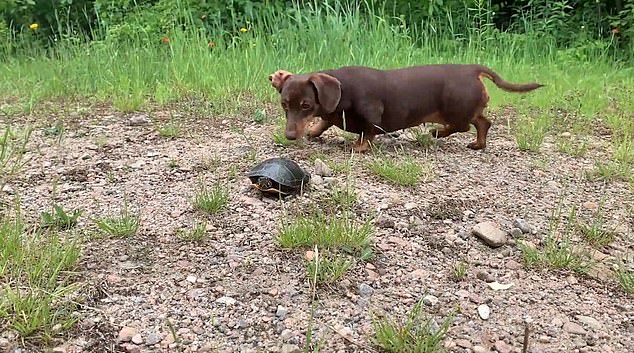 The hound loops around the unfamiliar creature, frantically shuffling her hind legs around in a circle while keeping her eyes locked on to the turtle

As Pi gets closer, it seems that that she will be brave enough to inspect the turtle with her snout which is only inches away from the shell.

But the dog begins to growl and slams its elongated body into reverse.

Long Long Ranch calls Pi the ‘Queen’ of the nine-strong dachshund pack who live at the North Bay site.

Its website says: ‘Pi is wise beyond her years and therefore has naturally found herself as the matriarch of our Ween Team. 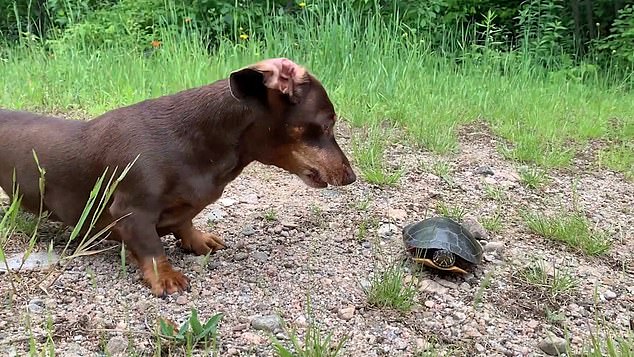 Pi gets closer, and it seems that that she is finally ready to inspect the turtle. But then she changes her mind and scrambles backwards

‘Being the Queen Ween, she presides over all the comings and goings on the ranch and revered by all the other dogs, who look to her for guidance and approval.’

The video, filmed on July 1, was lapped up by entertained viewers on social media who said they could ‘watch it all day’.

Sharon Hansen from Gig Harbor, Washington, said: ‘Oh my gosh, this is so adorable and funny! So typical of a doxie. I love it!’

Prince Harry And Meghan Will Give Up HRH Titles And State Funding, Plus Reimburse State For Official Residence

'90 Day Fiancé': Evelin Villegas Ran Into Laura Jallali At a Bar in Ecuador

Claire Sweeney, 48, looks amazing in a strapless bikini on the beach in Barbados – The Sun

China Coronavirus outbreak: How many people have REALLY been infected? Latest death toll

Now that Pelosi has impeached Trump, she will become his stooge

01/18/2020
Recent Posts
We and our partners use cookies on this site to improve our service, perform analytics, personalize advertising, measure advertising performance, and remember website preferences.Ok