This is the horrifying moment the 93-year-old Prime Minister of Malaysia made an anti-Semitic joke and the Cambridge Union audience roared with laughter.

Mahathir Mohamad has caused outrage after he said he only liked his Jewish friends because ‘they’re not like other Jews’.

Dr Mohamad’s appearance at the world’s oldest debating society had already proved controversial before his arrival with the Cambridge Union saying he should not be banned because they respect freedom of speech.

Footage from the event on Sunday night emerged online today and when asked about comments he had made about Jews and money, prime minister Mohamad says: ‘I have some Jewish friends, very good friends. They are not like the other Jews, that’s why they are my friends’.

The audience then laughs and the world’s oldest serving state leader turns to them and smiles – with former presidents of the Union saying his ‘appalling’ appearance has brought ‘shame’ on the institution.

Brexit Party MEP and smoked salmon millionaire businessman Lance Forman said he was appalled by the incident, adding: ‘The most concerning thing was the reaction, the people laughing.’

MailOnline has asked Cambridgeshire Police if they are investigating the incident.

Dr Mohamad previously said that he was ‘glad to be labelled anti-Semitic’ because Jews have the same ‘cruelty and hard-heartedness’ as Nazis – and also claimed ‘Jews run this world by proxy’. 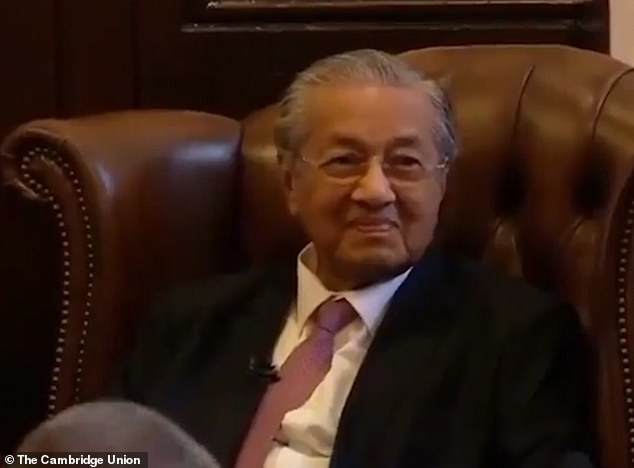 Malaysian PM Mahathir Mohamad, 93, smiles to the laughing Cambridge Union audience after he said he liked his Jewish friends because ‘they’re not like other Jews’ 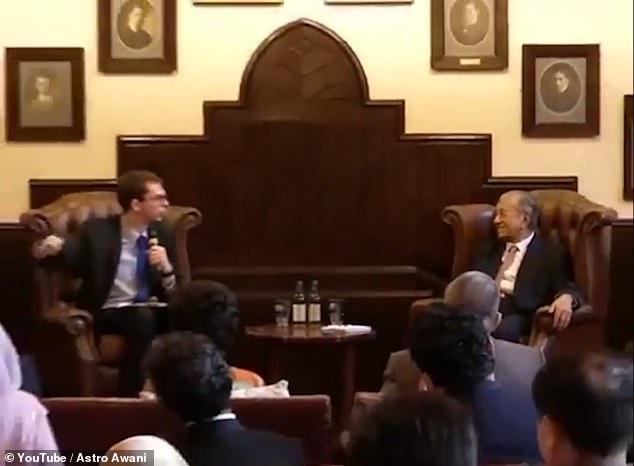 Adam Davies, the Speakers Officer of the Union, left, asked him about comments he had made about Jewish people and money, sparking more anti-Semitism

A hate crime is when a person commits a crime against another person because of their disability, gender identity, race, sexual orientation or religion.

These five strands – namely race or ethnicity, religion or beliefs, sexual orientation, disability and transgender identity – are all accepted by police forces as being hate crime related, however some forces widen out the term to include other forms of prejudice, such as ageism and sexism.

Campaign groups are fighting to get these categories officially added to the wording of the law, making it compulsory for police officers to investigate such offences as hate crimes.

Dr Mohamad, who was Malaysian Prime Minister between 1981 and 2003 before returning again 2018, has said hugely controversial things about Jews over the past four decades.

In his 1970 book The Malay Dilemma he said the Jewish people are ‘not merely hook-nosed, but understand money instinctively’.

In 1984, he cancelled a visit by the New York Philharmonic orchestra because it was intending to play music by a Jewish composer.

His anti-Semitism first came to international attention when he gave a major speech attacking Jews days before he retired as prime minister in 2003.

‘The Europeans killed six million Jews out of 12 million,’ he said. ‘But today the Jews rule this world by proxy. They get others to fight and die for them.’

He later retired from public life but continued to make anti-Semitic comments.

At a 2010 conference, he said: ‘Jews had always been a problem in European countries. They had been confined in ghettos and periodically massacred.

‘But they still remained and still thrived and held whole governments to ransom.

‘Even after their massacre by the Nazis in Germany, they survived to be a source of even greater problems to the world.’

He also questioned the number of Jews killed in the Holocaust in an interview with the BBC after returning to power last year.

In an appearance at the Oxford Union in January he was confronted about his comments but said he had to right to say what he liked.

He said: ‘We are free to say what we like, we can say something that can be regarded as antisemitic by the Jews.

‘That is their right to hold such an opinion of me. It is my right to tell them they have been doing a lot of wrong things.’ 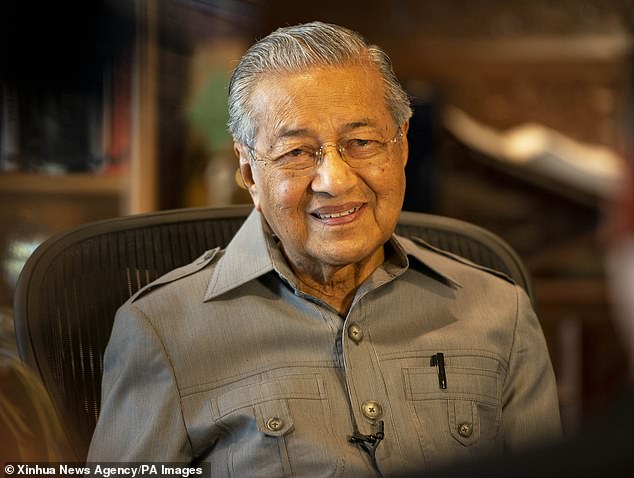 And on Sunday he courted more controversy in an interview with Adam Davies, the Speakers Officer of the Union.

Mr Davies asked him: ‘Why do you say that the Jewish people in general are inclined towards money? There are lots of Jews who…care about human rights, care about social justice, care about democracy’.

Mr Mohamad replied: ‘I have some Jewish friends, very good friends. They are not like the other Jews, that’s why they are my friends.’

Barrister Jeremy Brier, who was president of the union in 2001, told the Jewish Chronicle: ‘I’m appalled that anti-Semite Mahathir Mohamad was invited to speak, was openly anti-Semitic and was greeted with laughter. What a shameful chapter in the history of a wonderful organisation.’

Media lawyer Adam Cannon, who was president in 1996, said: ‘To allow vile antisemitic and racist comments to go unchallenged while the audience laughs is unacceptable. It is shameful and humiliating for such a great institution to allow this to take place’.

The Cambridge Union hosted the event and said on the day: We also urge any of our members rightly concerned about the Prime Minister’s views and actions to come to the Union this evening to have the chance to question him in person’.

Today they blamed the laughter on Mr Mohamad’s entourage.

A spokesman said the guffawing ‘originated from the middle section, which was composed of the Prime Minister’s delegation’.

‘The Prime Minister was scrutinised on his record throughout the event both from the moderator and the audience’, the statement said.

‘As a society, free speech and student welfare are equally important to us, we invited the Cambridge Jewish Society to attend the talk to ask questions to the Prime Minister and we also allowed them to hand out flyers to the audience.’