Boris Johnson’s penultimate PMQs was delayed amid chaotic scenes as two Scottish nationalist MPs were kicked out of the House of Commons chamber.

In furious scenes this afternoon, Speaker Sir Lindsay Hoyle ordered the removal of Alba Party MPs Neale Hanvey and Kenny MacAskill for disrupting the start of the session.

Mr MacAskill, the East Lothian MP, could be heard trying to raise a point of order and appeared to say ‘we need a referendum in the Prime Minister’ before he was drowned out by other MPs.

He refused to sit down and continued to speak, prompting Sir Lindsay to act.

Mr Hanvey, the Kirkcaldy and Cowdenbeath MP, then rose to his feet and could not be heard over the heckling from Tory MPs, before he was subsequently told to leave the chamber.

The Alba Party duo wrote to Mr Johnson earlier today to demand he grant the Scottish Government the power to hold a second independence referendum during his final weeks in Number 10.

They wrote: ‘We urge you once again to honour the Scottish Government’s extant mandate to hold a consented and legal Scottish independence referendum but put you and your successor on notice that the refusal to respect Scottish democracy is not a defensible or sustainable position for the UK Government.

‘The Scottish people and their elected representatives will continue to assert their democratic rights through popular demonstration and continuing Parliamentary initiatives.

‘The question of Scottish sovereignty will not be denied and Scotland’s people will ultimately prevail.’ 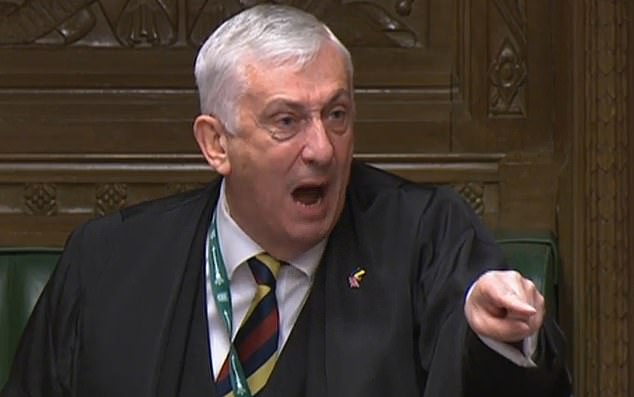