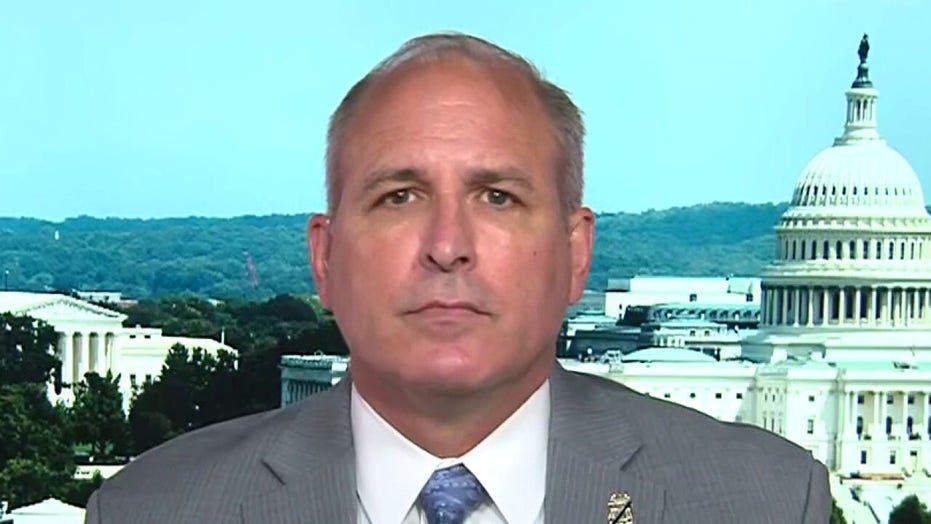 What happened to the promise of peace after federal agents left? Insight from Acting CBP Commissioner Mark Morgan.

Protesters in Portland used pool noodles filled with nails as weapons and hurled frozen eggs and rocks at officers during a demonstration outside a law enforcement building Friday night.

Officers attempted to disperse crowds of hundreds of people almost immediately after they arrived outside the Penumbra Kelly Building– which houses both the Multnomah County Sheriff’s Office and Portland Police Bureau — at around 9:45 p.m. 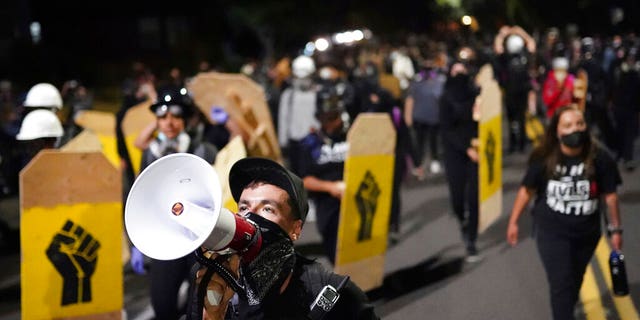 A protester leads a crowd of demonstrators toward the Multnomah County Sheriff’s Office on Saturday, Aug. 7, 2020 in Portland, Ore. (AP Photo/Nathan Howard)

Police declared an unlawful assembly outside the building, told everyone to leave the area and made "targeted" arrests for trespassing as protesters refused to leave, according to the Police Bureau.

Demonstrators, some wearing helmets and gas masks, and carrying shields, began breaking up large chunks of concrete on the sidewalk and throwing them at police. Others attempted to block traffic on East Burnside Street.

Some protesters aimed lasers at officers, which can damage eyesight, and threw commercial-grade fireworks at police gathered in a parking lot.

One person who was arrested was wearing ballistic body armor, police said. Around midnight, a vehicle was stopped and an occupant was arrested for shining a laser at a police aircraft. 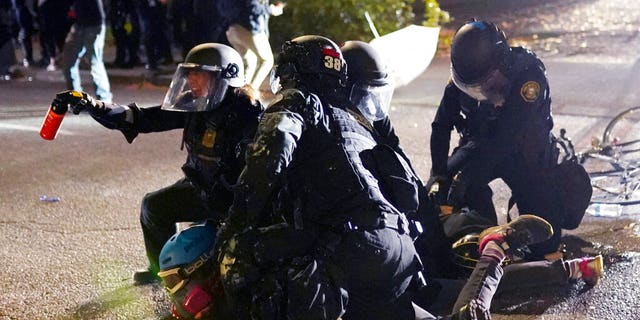 Portland police officers make an arrest while dispersing protesters in front of the Multnomah County Sheriff’s Office early in the morning on Saturday, Aug. 8, 2020 in Portland, Ore. (AP Photo/Nathan Howard)

Officials did not specify how many arrests were made.

"As the officers dispersed the crowd, rocks, bottles, and explosives were continually launched at officers. Because of the danger posed by these projectiles, officers used crowd-control munitions as they moved the group." 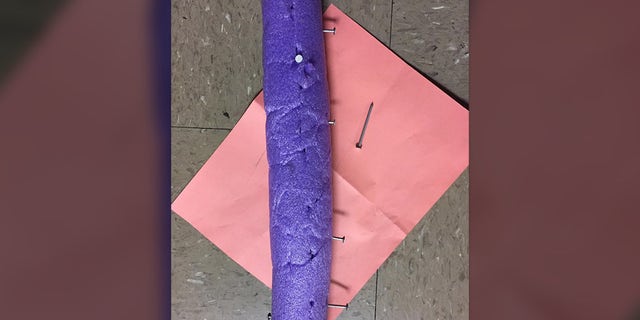 Earlier in the day, a group of people gathered at a park in east Portland and marched to the local police precinct, where authorities say they spray-painted the building, popped the tires of police cars, splashed paint on the walls, vandalized security cameras and set a fire in a barrel outside the building.

One officer was severely injured by a rock, police said, but no additional details were provided.

The violent exchanges overshadowed another peaceful demonstration decrying police brutality against Blacks and minorities that occurred earlier in the night. Police said they did not interact with that crowd.

Democratic Mayor Ted Wheeler said this week that violent protesters are serving as political “props” for President Trump, who has tried to portray all protesters as “sick and dangerous anarchists” running wild in the streets.

The chaos that started Thursday night and lasted into Friday morning in a residential neighborhood about 6 miles from downtown were noticeably smaller than the crowds of thousands who turned out nightly for about two weeks in July to protest the presence of federal agents sent by the Trump administration to protect a federal courthouse that had become a target of nightly violence.

Law enforcement on Saturday was bracing for the 71st night of protests since the death of George Floyd in May. Floyd, an unarmed Black man, died in police custody after a Minneapolis officer kneeled on his neck for over eight minutes.