Police have increased their presence at a protest on the steps of Victoria’s Parliament House after demonstrators gathered around wooden gallows on Monday night chanting calls for the Premier to go.

Police flanked protesters as MPs returned to Parliament on Tuesday, due to debate the controversial pandemic bill at 1pm. The government on Monday night agreed to make several amendments to it after renewed pressure from the public sector watchdog. 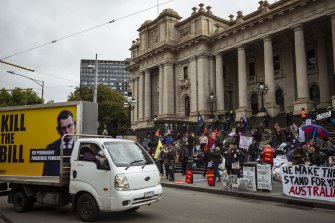 Around 300 protestors remained on the steps of Parliament House on Tuesday.Credit:Chris Hopkins

A few dozen police stood between protesters and the front of Parliament House on Spring Street on Tuesday as about 300 protesters expressed their animosity towards the proposed pandemic legislation.

The comments come as footage captured overnight showed a 4WD pulling a large gallows display along Spring Street before parking outside Parliament House.

The structure had a rope connected to a small cross at the bottom bearing the word “treason” with a protester dressed as the grim reaper.

The gallows display was met with chants against Premier Daniel Andrews, including, at one stage “kill Dan Andrews”.

“The violent images on display in Melbourne have no place and should be condemned by all political leaders.”

Earlier on Monday night, speakers railed against the proposed bill.

Demonstrators had remained outside Parliament House until late on Monday night, several slept on the steps. 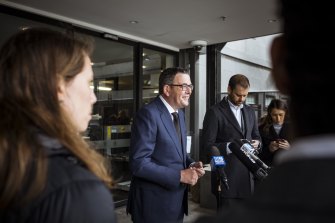 Protesters chanted “we don’t trust you”, “step aside” and “jail [Daniel] Andrews”.

The arrival of the gallows came after a mostly peaceful day of demonstrations on Spring Street on Monday, but it was the second time a gallows had been used in protests after a similar structure was carried by a marcher on Saturday.

The government needs the support of three crossbenchers in the Legislative Council and Labor will rely on Reason Party MP Fiona Patten, Animal Justice MP Andy Meddick and Greens leader Samantha Ratnam, who all pushed for the proposed amendments and celebrated the announcement on Monday night.

In a joint statement, the three MPs said the amendments they negotiated “respond to community concerns and strengthen the bill with further transparency and accountability measures”.

Fines for breaching public health orders will be halved and the timeframe to release the reasons behind pandemic decisions slashed under the amendments proposed by the Labor government and supported by key crossbenchers, provided late on Monday night.