Police are seeking help to find registered sex offender Kor Beyong after he allegedly failed to appear in court or report to police when required.

Assistant Commissioner Simon Gilbert said on Sunday that Beyong had four warrants for his arrest and the 30-year-old was known to spend time around Melbourne’s CBD, Carlton, North Melbourne and the Sunshine and Footscray areas. 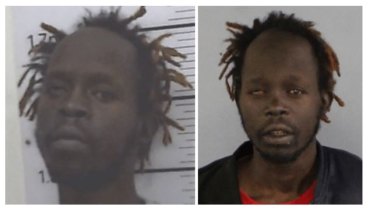 Police have released these images of Kor Beyong.

He said Beyong was put on the sex offenders registry in 2013 after being convicted of a 2011 indecent assault against a woman near a public transport location, and he also had a history of drug and dishonesty offences.

Gilbert said people were urged not to approach Beyong and instead to let police arrest him.

Police said Beyong’s missed court appearance last week was over an alleged dishonesty offence. He was last seen on July 15 when he was released from a short term in custody on unrelated matters.

Police describe Beyong as being of African appearance, 170 centimetres tall, with a slim build and black braided hair, which is sometimes dyed blonde.

He has three tattoos on his right arm, including a heart and a crucifix with a heart. On his left arm is a tattoo of the word “familiar”.

“If anyone knows where he might be staying or thinks they know where he’s putting his head down, we would ask them to contact Crime Stoppers on 000 or crimestoppers.com.au,” Gilbert said.

“If Mr Beyong or his friends see this, we would urge him to present himself to a police station immediately and have these matters resolved.”

Gilbert said Beyong had a week to report to police to list his living arrangements following his release from custody on July 15, and that week expired last Friday.

“He does have an extensive criminal history, but I don’t suggest that he’s dangerous by any stretch of the imagination,” he said. “However, given the fact that he has been avoiding apprehension to this date, we’re seeking the public’s assistance and we are asking that no one goes near him and just contact 000. We’re better equipped to respond to seeing him and arresting him.”