POPE Francis held a symbolic meeting with one of the most powerful figures in Iraq on the second day of his landmark trip to the war-ravaged country.

The Pontiff had a 45-minute heart-to-heart with Grand Ayatollah Ali al Sistani – the nation's top Shia cleric – at the Islamic scholar's home in the holy city of Najaf. 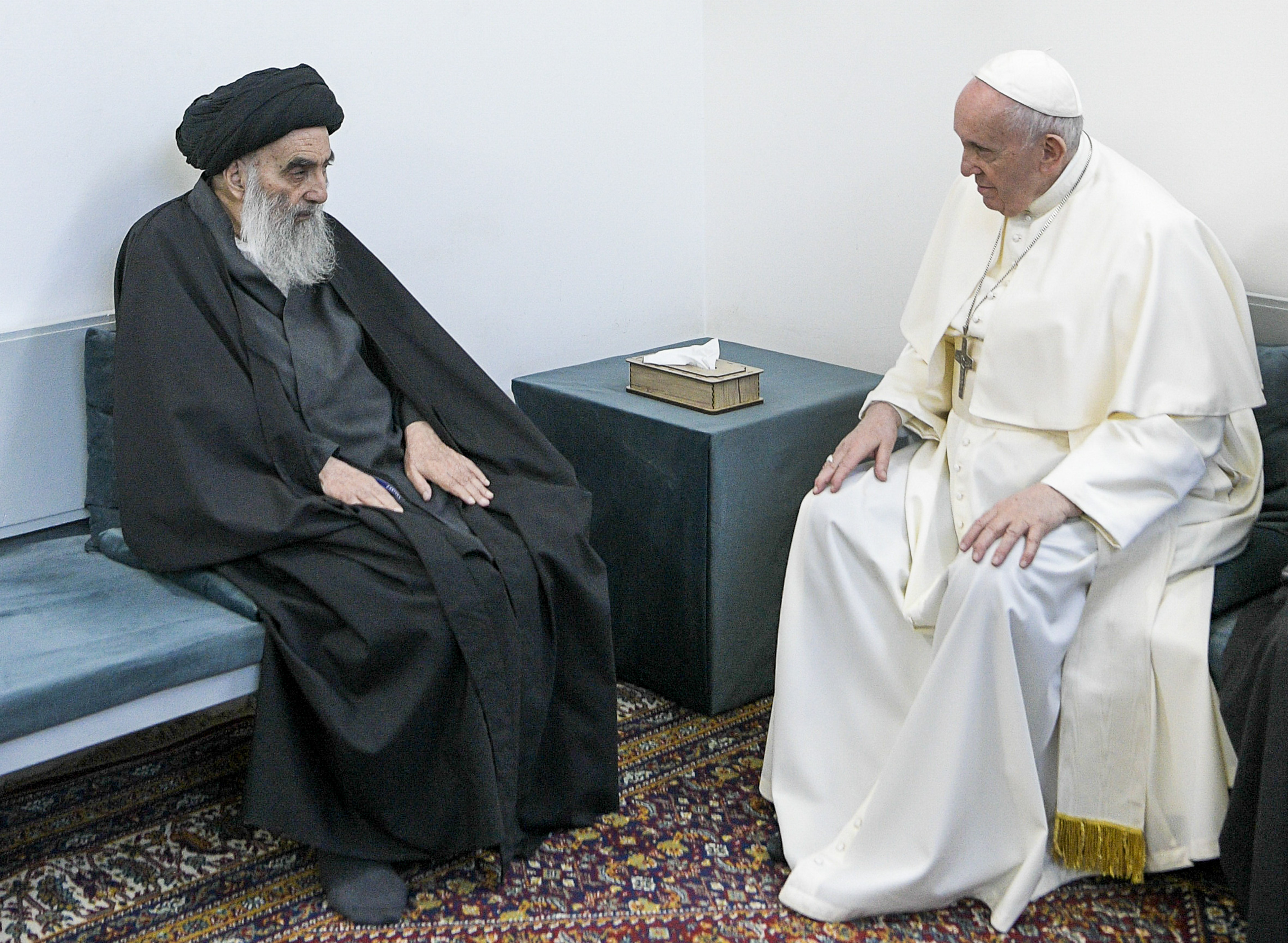 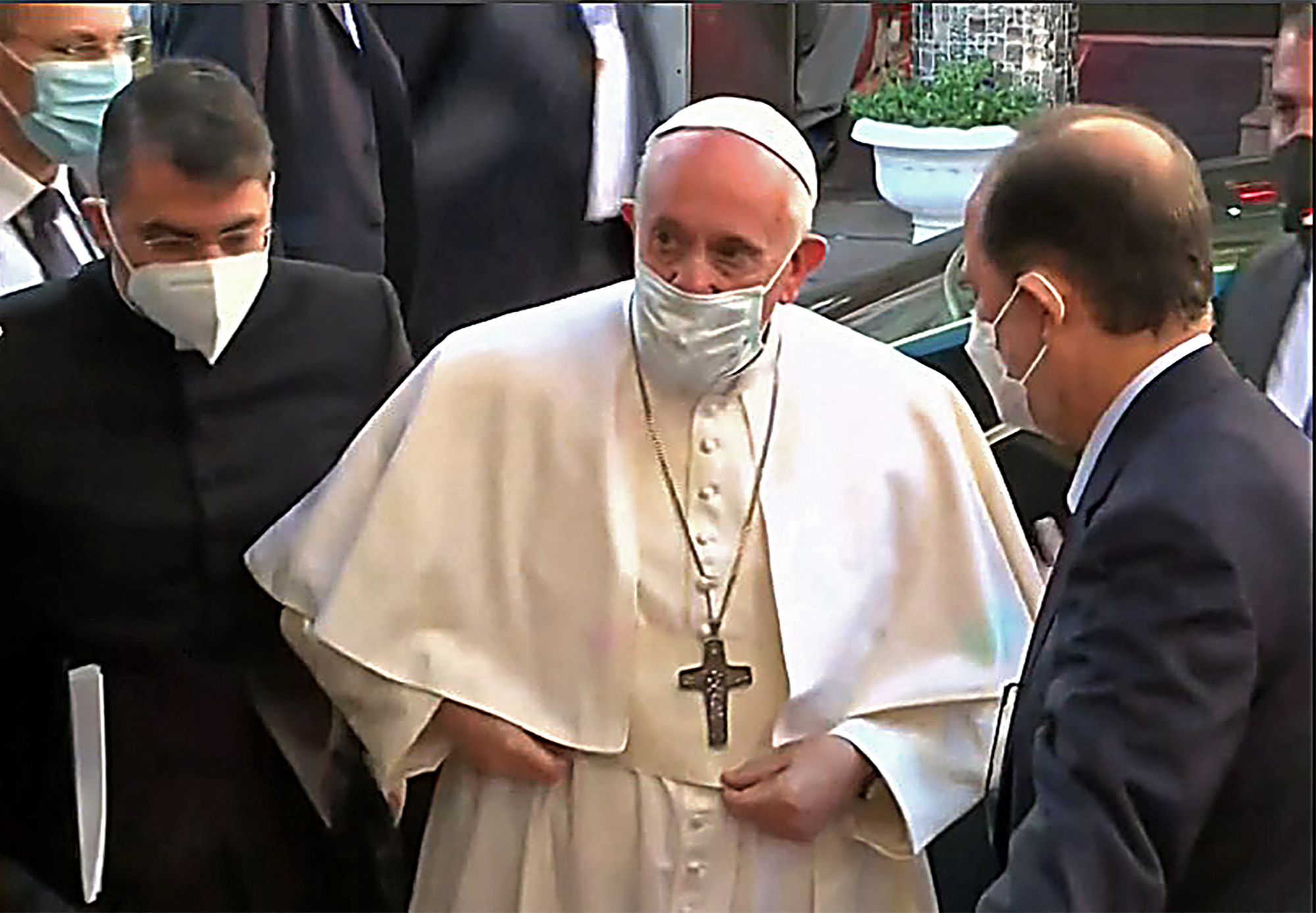 The Catholic leader arrived in a bullet-proof vehicle and as he entered the small house white doves were released – to reflect the peaceful theme of his visit.

After the meeting, Sistani – who rarely meets with prominent figures – called on the world's religious leaders to hold "great powers" to account and for wisdom and sense to prevail over war.

It's reported during the face-to-face Sistani "affirmed his concern that Christian citizens should live like all Iraqis in peace and security, and with their full constitutional rights".

The Pope also called for religious communities to work together.

"(He) underlined the importance of collaboration and friendship between religious communities so that, by cultivating mutual respect and dialogue, we can contribute to the good of Iraq, of the region," the Vatican said after the meeting.

Francis, 84, has visited predominantly Muslim countries including Turkey, Jordan, Egypt, Bangladesh, Azerbaijan, the UAE and the Palestinian territories, using those trips to call for inter-religious dialogue. 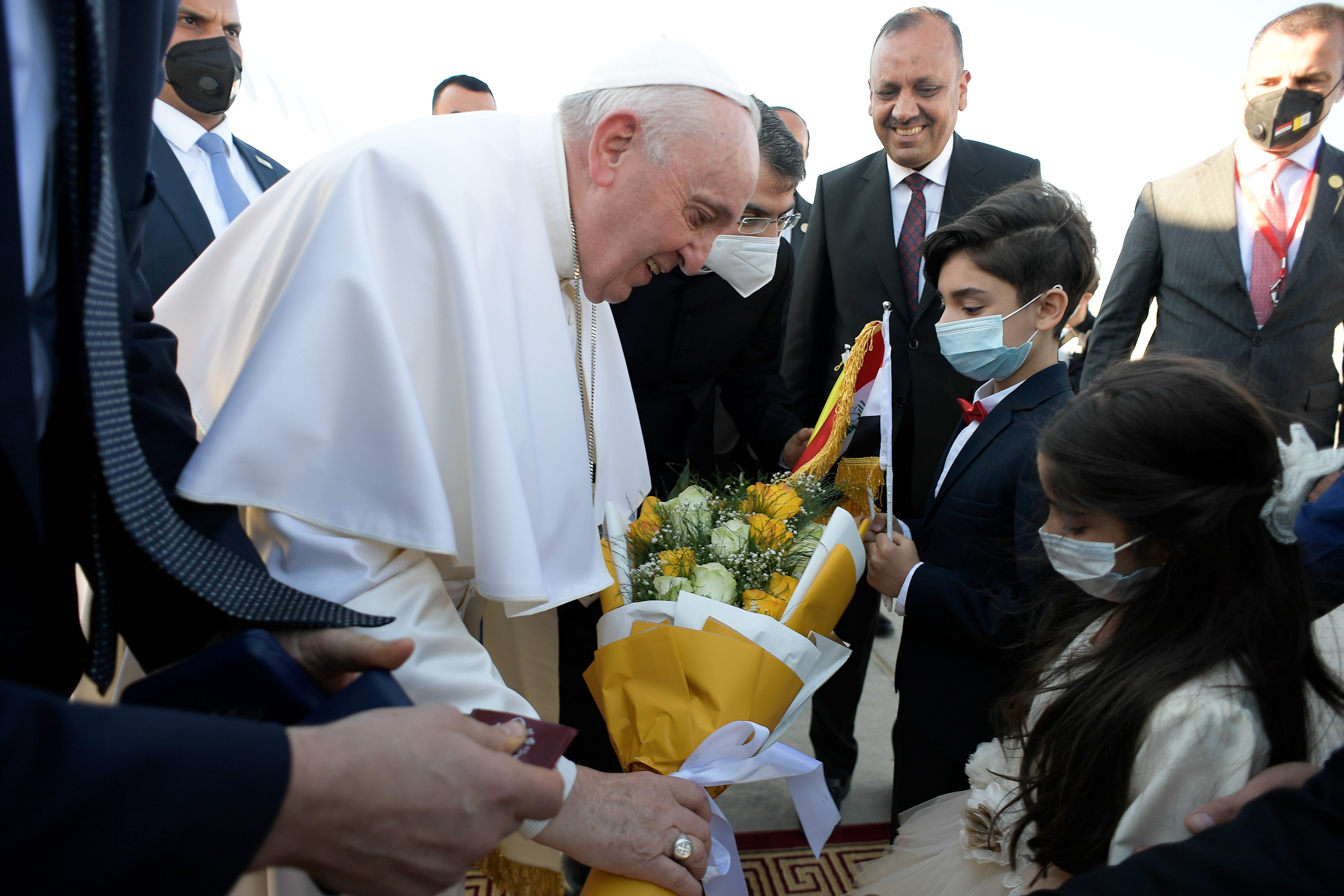 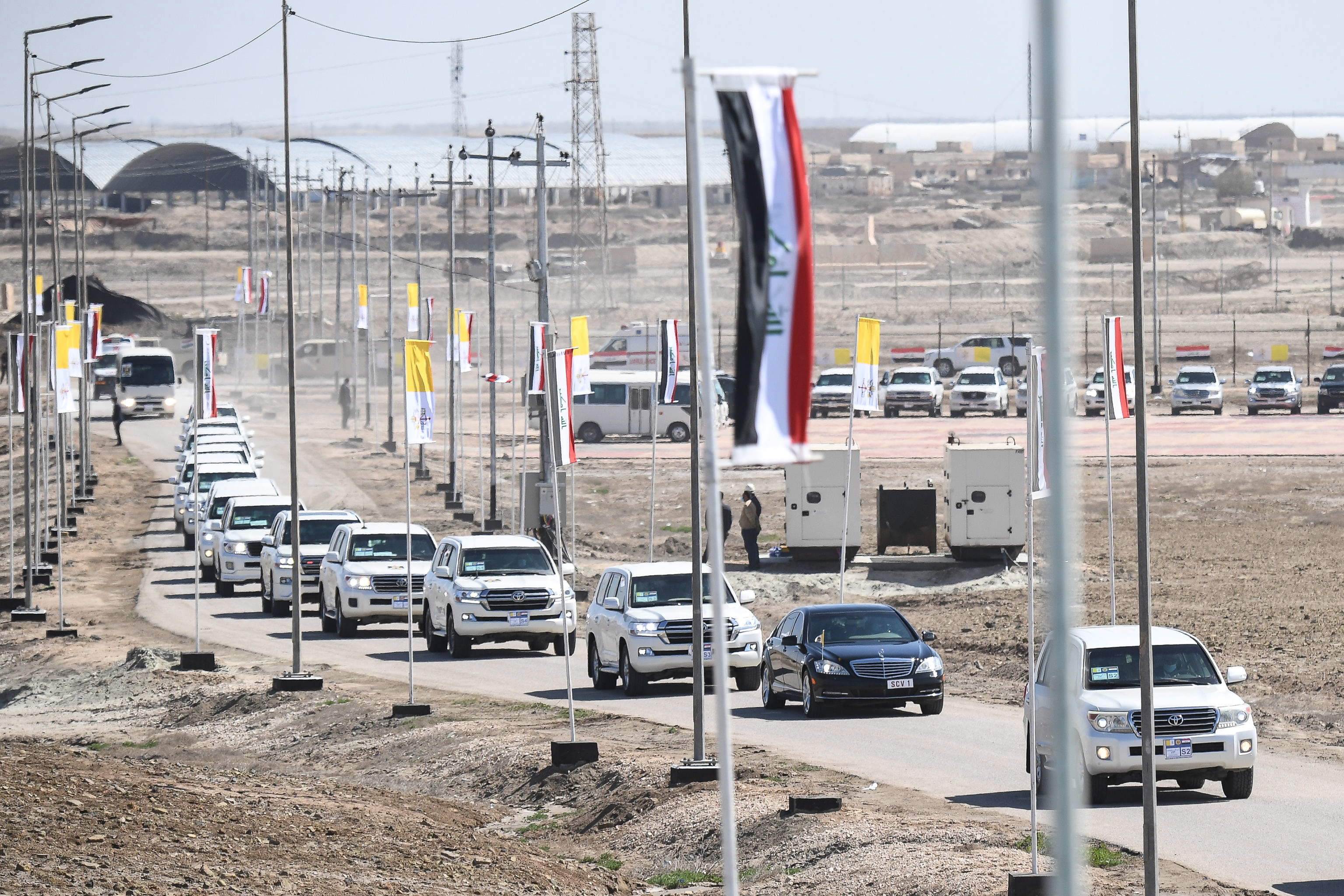 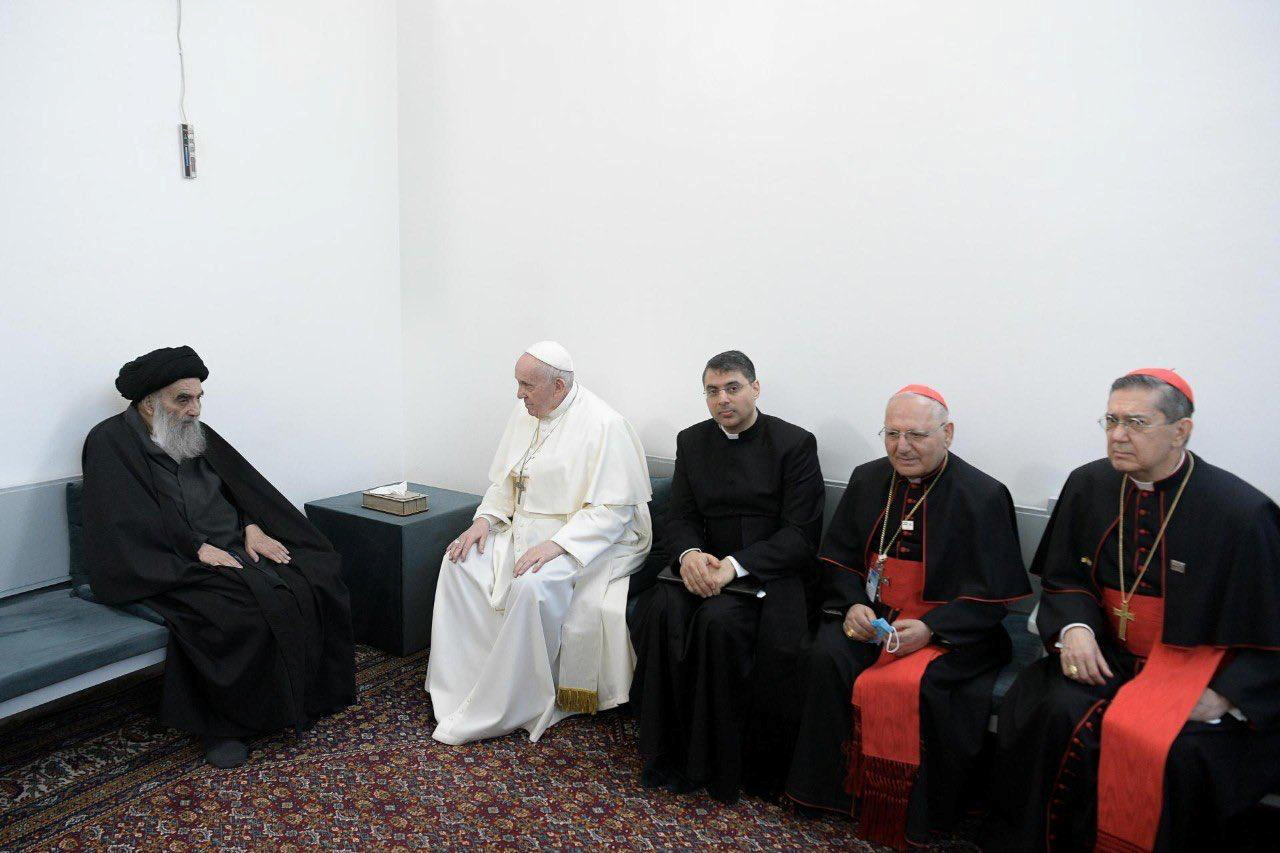 In a statement, Sistani said, "Religious and spiritual leadership must play a big role to put a stop to tragedy … and urge sides, especially great powers, to make wisdom and sense prevail and erase the language of war".

Great powers must "not sponsor their own self-interest at the expense of the right of people to live in freedom and dignity", he said, adding that Christians should live like all Iraqis in peace and coexistence.

The meeting took place at the humble home Sistani has rented for decades, located along a narrow alleyway in Najaf near the golden-domed Imam Ali shrine in Najaf.

An official Vatican photo showed Sistani, 90, in his traditional black Shiite robe and turban sitting across from Francis, in his white cassock.

Francis then headed to the ruins of ancient Ur in southern Iraq, revered as the birthplace of Abraham, father of Judaism, Christianity and Islam where he was scheduled to give a speech at an interreligious meeting.

After flying back to Baghdad, he is expected to say Mass at the Chaldean Cathedral of Saint Joseph.

Sistani is one of the most important figures in Shiite Islam, both within Iraq and beyond.

He has almost mythical stature among millions of his followers and has intervened at critical junctures as Iraq lurched from one crisis to another.

His edicts sent Iraqis to free polls for the first time, rallied hundreds of thousands to fight against ISIS in 2014 and toppled an Iraqi government under pressure from mass demonstrations in 2019.

He is a reclusive figure who rarely appears in public or holds meetings.

However, despite his low profile has been called the "most influential" figure in post-invasion Iraq.

He talked American and Iraqi fighters into ending the running battles that had killed hundreds and which threatened to damage the holy Imam Ali Mosque.

And he pushed for 'free and fair' elections in 2005 even telling women they must vote even if their husbands forbade them.

He has refused talks with Iraq's current and former prime ministers, according to officials close to him.

Sistani agreed to meet the Pope on condition that no Iraqi officials would be present, said a source in the president's office.

He traveled to London to receive medical treatment.

It was, reportedly, the first time that Sistani had left Iraq in decades, and may have been due, in part, to growing concerns for his safety from sectarian violence.

The Pope began his trip to Iraq on Friday, flying into Iraq amid the tightest security ever seen for a papal visit.

The country has deployed thousands of security personnel to protect him during the visit, which comes after a spate of rocket and suicide bomb attacks and a spike in COVID-19 cases.

Speaking yesterday in Baghdad, the Pope spoke of his desire for interfaith dialogue and religious tolerance at a time of increasing religious polarisation.

He said: "Only if we learn to look beyond our differences and see each other as one human family, will we be able to begin an effective process of rebuilding and leave to future generations a better, more just and more humane world."

He said he was making the trip to show solidarity with Iraq's devastated Christian community – which numbers around 300,000, just one fifth of the number before the U.S. invasion in 2003 and the brutal Islamist militant violence that followed.

Iraq's security has improved since the defeat of Islamic State in 2017, but the country continues to be a theatre for global and regional score-settling, especially a bitter U.S.-Iran rivalry that has played out on Iraqi soil.

After he arrived, Francis made an impassioned call for Iraqis to finally give peacemakers a chance, speaking during a gathering of Iraqi officials and diplomats at the presidential palace.

Pope John Paul II came close to visiting, but had to cancel a planned trip in 2000 after talks with the government of then-leader Saddam Hussein broke down.