Udon Thani: In a remote Catholic school in Thailand, Sister Ana Rosa Sivori, 77, kneels in a chapel to pray at the beginning of the school day.

The Catholic nun is also counting down the days when she will be reunited with her cousin, Pope Francis. 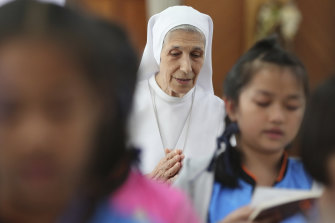 Sister Ana Rosa Sivori and students pray inside a church in Udon Thani, about 570 kilometres north-east of Bangkok, Thailand. Credit:AP

Or, as she calls him, Jorge. They grew up together in Argentina.

Sister Sivori, who has lived in Thailand for more than 50 years, will travel with Pope Francis when he visits from November 20 to 23.

"For me, it's a pleasure that he's coming … I never thought that he will be coming to Thailand," the soft-spoken nun told Reuters in an interview. 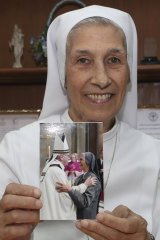 "I'm happy for the people. I want the people to see him, to be close to him."

The cousins, whose grandfathers were brothers, grew up in a big Catholic family in Argentina.

Sivori said they weren't close as children, since Jorge Mario Bergoglio – as the Pope was known then – was six years older than she.

She joined the Catholic ministry young, and her calling as a missionary brought her to Thailand, where she has lived since 1966 and worked in schools across the country.

Now, she is a vice-principal at St Mary's School in the north-eastern province of Udon Thani, about 600 kilometres from Bangkok.

The cousins have grown closer since Bergoglio became Pope Francis in 2013.

On every journey home to her family in Argentina, Sivori first stops by the Vatican in Italy to see him for a few days.

The last time they saw each other was in 2018, when they bonded over their love of books.

"He took me up to the big room with plenty of books. He told me to choose, he would ask 'Do you want this one?'," she said.

"When we talk, we feel like brother and sister. For me, of course I know that he's the Pope … but we talk simply."

She will travel to Bangkok ahead of the pontiff's arrival and shadow him during his visit, at his request.

In the Buddhist-majority country, Pope Francis will meet King Maha Vajiralongkorn, the supreme Buddhist patriarch, Catholic leaders and students, before flying on to Japan.

Sivori brings out an envelope of handwritten letters and postcards from the Vatican and reads them fondly.

"When I meet him, I'll call him by his name, Jorge. Pope Francis just came after," she said.