Even though President Donald Trump said one of his executive orders this weekend would forestall evictions, the action falls short of preventing Americans from losing their homes, according to experts.

“This executive order offers merely false hope, and risks increased confusion and chaos at a time when renters need assurance that they will not be kicked out of their homes during a pandemic,” said the National Low Income Housing Coalition in a press statement. “And in many ways, it’s an empty shell: Despite Trump declaring he would stop evictions, the EO provides no clear directive for any entity to do so.”

But the president’s executive order issued on Saturday largely delegated the eviction crisis response to government agencies, requesting that they consider certain actions.

“The evidence is clear: 30 to 50 million are at risk of eviction and this will double up. That’s something we can’t consider any longer,” said Emily Benfer, a visiting professor of law at Wake Forest University. “We need actions in the form of eviction moratorium and rental [assistance].”

In his executive order, Trump directed the Treasury Secretary and the Secretary of Housing and Urban Development to identify available federal funds that could provide temporary financial aid for struggling renters and homeowners.

“I had concerns about the enforceability of all these executive orders, especially where the funds will come from,” said Scott Behren, an attorney at Behren Law Firm. “Because Congress isn’t appropriating anything right now, you’ll have to take funds appropriated from somewhere else.” 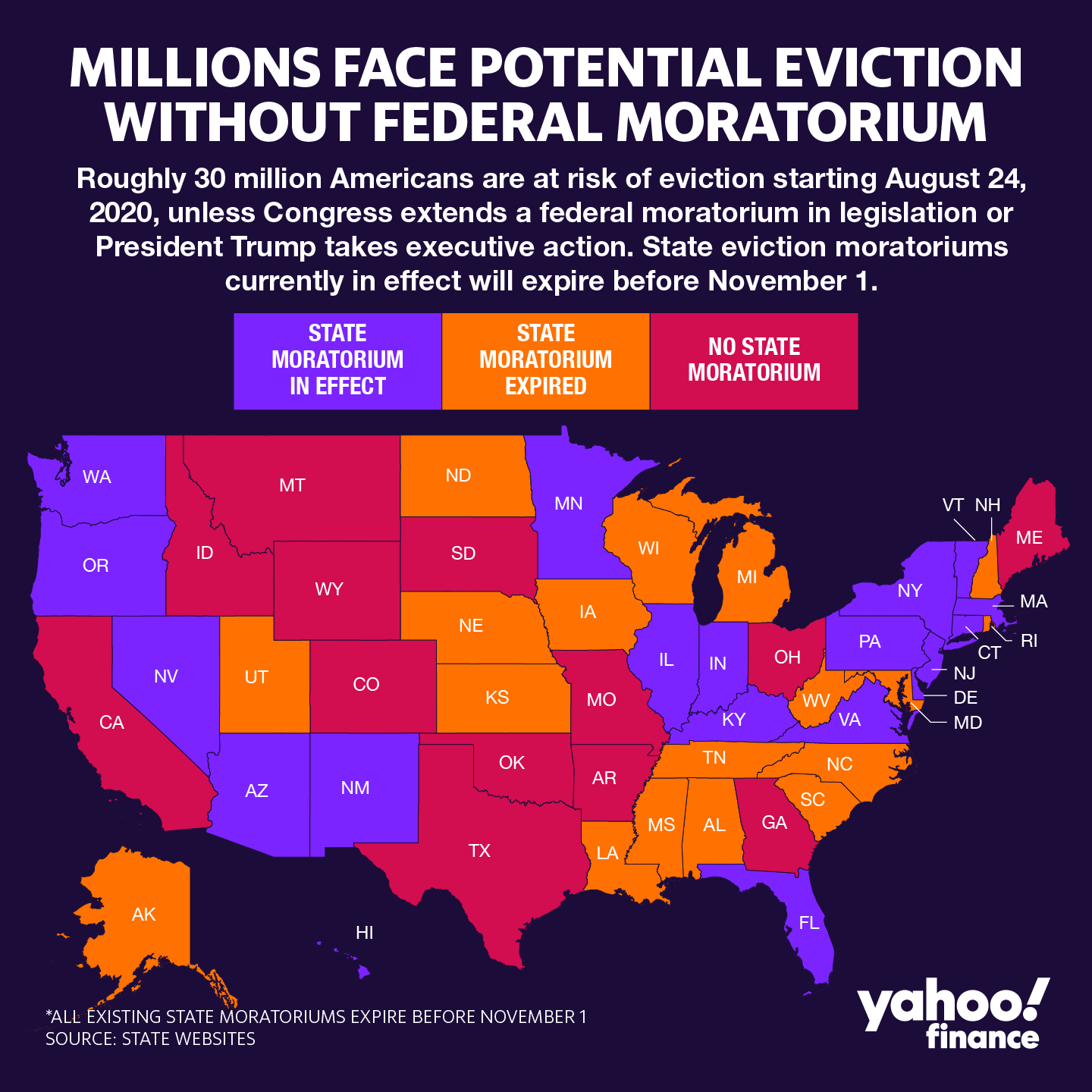 The order also called upon the Secretary of the Health and Human Services and the Director of the Centers of Disease Control and Prevention to consider “whether any measures temporarily halting residential evictions of any tenants for failure to pay rent are reasonably necessary” to prevent the spread of the virus.

But the order left out key agencies that provide housing assistance, according to Benfer.

“Other departments, such as the Department of Agriculture and Veteran Affairs, are all responsible for affordable housing programs,” she said, “and that is telling they’re not addressed in this order.”

30 to 40 million Americans at risk

When asked what steps HUD was taking in response to the executive order, the department sent a press release saying it “will prioritize federal funds that can be used to provide financial assistance to struggling renters and homeowners” as well as “work with its grantees to ensure that renters and homeowners are not forced out of their homes during the COVID pandemic.”

“President Trump and Secretary Carson have done everything in their power to ensure that no American will lose their home due to any hardship caused by this pandemic,” a HUD spokesman wrote to Yahoo Money. “This executive order further underscores that commitment.”

Read more: Coronavirus: What if you can’t pay your mortgage?

Yahoo Money also reached out to the CDC and HHS to find out what they plan to do in response to Trump’s executive order. Neither immediately responded to the requests for comment.

An estimated 30 to 40 million Americans are at risk of losing their homes over the next several months after a federal eviction moratorium for government-backed mortgages expired on July 24, according to a report from The Aspen Institute, a nonpartisan think tank.

“Until we control evictions,” Benfer said, “the housing market will control the pandemic recovery.”