Shocking moment priest is attacked in Germany by wrench-wielding Russian driver who jumps out of his vehicle yelling ‘get that f***ing Ukrainian flag off your car!’

This is the terrifying moment a Russian man pulls up in front of a Ukrainian priest, retrieves a wheel nut wrench from his car and attacks him with it.

The shocking incident, which took place on Saturday in Saxony, east Germany, was prompted by the small Ukraine flag waving from priest Sergey Kosyak’s car.

It ended quickly after a group of passers-by and a passenger in the attacker’s own vehicle were able to get between the Russian man and his victim. 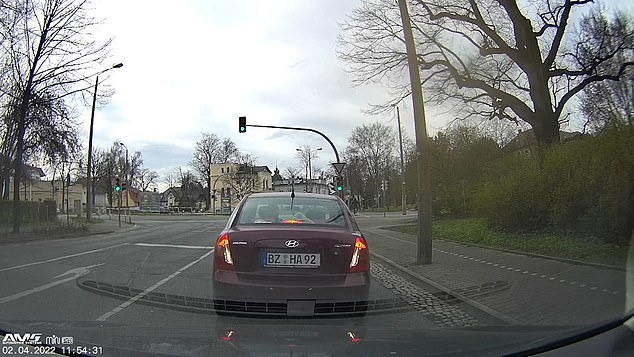 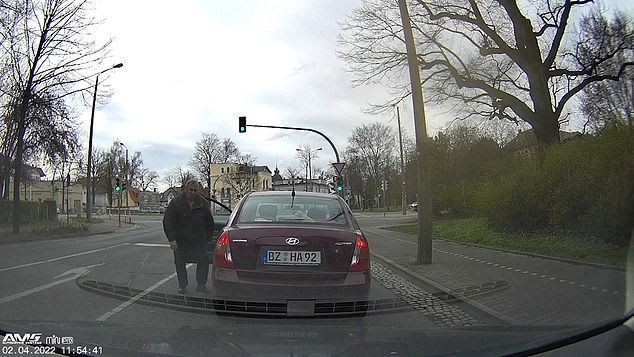 He was then pushed back into the front seat of his vehicle before driving away.

Father Sergey, 46, caught the whole attack on his dashcam and posted the video on YouTube.

He has lived in Saxony since 2014 and is head of the Bautzen Ukrainian Assistance Centre, which resettles refugees in Saxony from his native Donetsk.

Kosyak said the violent thug spotted the Ukraine flag waving from his car and yelled in Russian, ‘Take it off your f***ing car!’ before launching into him with the wrench.

He added: ‘It turns out that for Kremlin followers thirsty for Ukrainian blood, our flag acts like sunlight on vampires.’

The priest added he’s now worried what those refugees might face when they arrive.

Kosyak told TAG24: ‘I brought many people to Germany so that they would be safe here. Now something like this is happening here too. We don’t feel protected.’

The priest was not injured in the attack but did immediately call the police, ‘so that he is punished and others do not continue like this’, he said.

Local police, who did not name the attacker but did put out a call for witnesses, said they are now trying to figure out why the man lurched at Father Sergey. 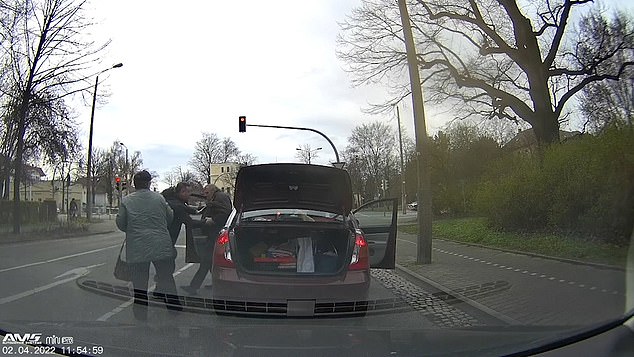 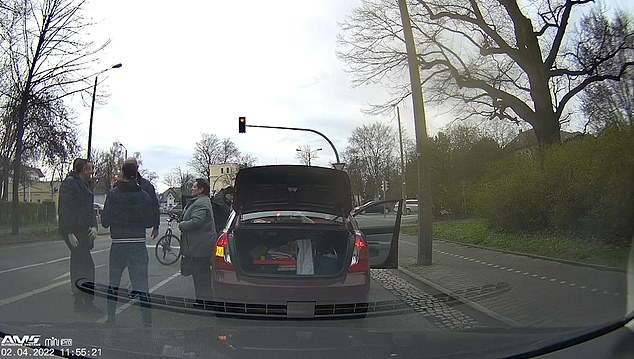 The driver’s companion, possibly his wife, appears to apologise to the group before driving on

They are investigating the man for attempted dangerous bodily harm and threats.

TV presenter Marina Ermoshkina, who used giant garden pliers on her grey accessory, said: ‘Not a single item or brand is worth my love for my motherland and my self-respect.’