The Prince of Wales spent the final day of his New Zealand tour on country’s South Island, where he was welcomed with a traditional Maori greeting.

After his welcome on Saturday, he was introduced to two llamas, named Legend and Max, who work offering rides into the nearby town.

Charles was spotted laughing and smiling as the animals were moved into place for a photograph – with the handler saying the well-behaved llamas were specifically chosen for the royal visit. Hundreds of royal fans made the trip to the town centre, where Prince Charles carried out a walkabout and shook hands with people in the crowds – with some from as far away as Bath, Manchester and Italy.

He also met the White Ribbon Riders – a group of people taking part in a motorbike tour to support work against domestic violence.

The Prince joked with one rider that they looked like a chapter of the Hell’s Angels, as they showed off their classic motorbikes including Harley Davidsons, Hondas and Triumphs. 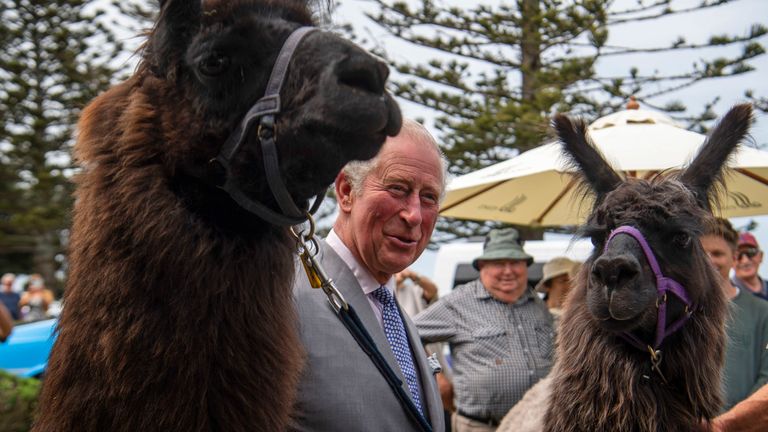 He later went on to visit Hutton’s Shearwater Colony – a breeding colony for an endangered seabird in the area, where the chairman opened a man-made underground burrow to show Charles one of the animals.

As he stroked it, Charles joked: “I’ve lost quite a lot of blood to these.”

He rounded out his day on a coastal walk, where he stopped and took in the views of the Kaikoura ranges and the Pacific Ocean.

The trip to New Zealand faced being overshadowed by the ongoing fallout back home, after his brother Prince Andrew appeared on BBC Newsnight, to discuss his friendship with Jeffrey Epstein. 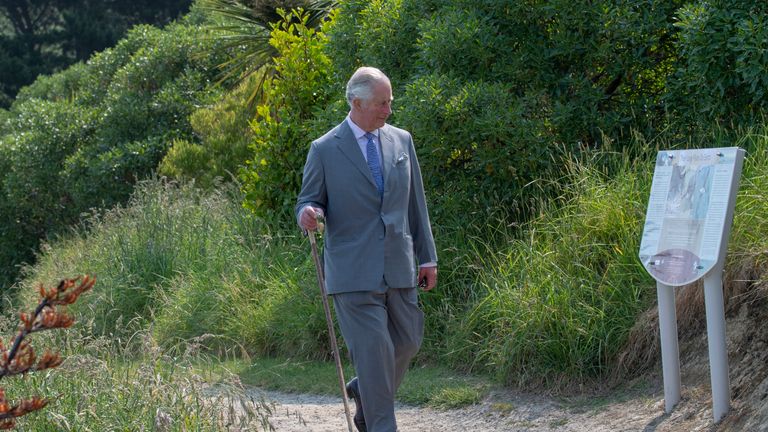 On Sunday, the Prince travelled to the Solomon Islands, for his first ever visit of the area and the last part of his Royal tour.

While there, he met a 12-year-old boy who helped the remains of a US soldier be returned to Oregon and be buried – 77 years after he was reportedly killed in action.

:: Listen to the Behind the Headlines podcast on Apple Podcasts, Google Podcasts, Spotify, Spreaker

Willie Bessi Davies found William Ross’ dog tag while he was out playing, which led to the repatriation.

Hundreds more people turned out to meet Charles during a trip to a memorial on Point Cruz, which was built to honour those who gathered information on Japan’s movements, when it was fighting against allied forces. 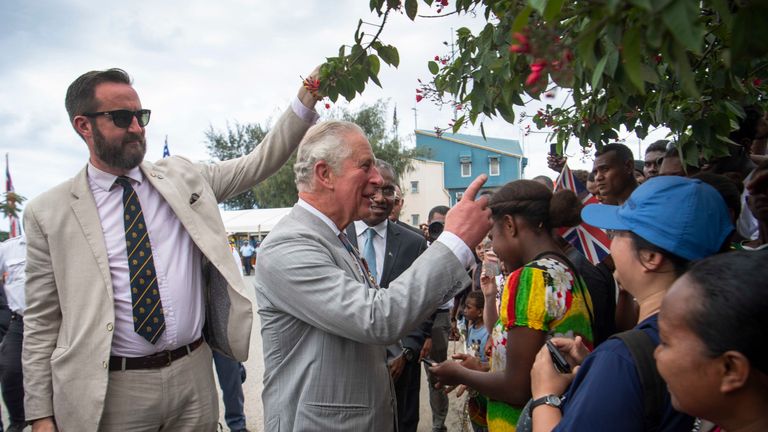 Charles also attended a church service in the country and lit a candle for victims of gender based violence, followed by a visit to Government House where he met local officials.

The Prince will travel home on Monday, while Camilla, who was with Charles on the New Zealand leg of the tour, has already returned to the UK as planned.