Qantas has announced a new direct Perth to Rome flight three times a week from June next year as Western Australia prepares to reconnect the state with the rest of the world.

The new flights, which are now on sale, complement the reintroduction in April of the highly popular direct Perth-London route, with both destinations key international tourism markets for the state. 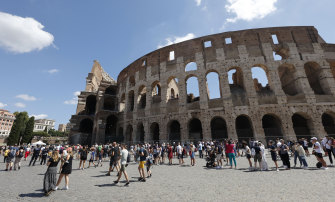 Direct flights between Perth and Rome are now on sale.Credit:AP

Boeing 787 Dreamliners will service the only non-stop link between Australia and continental Europe, with connecting flights available to 16 European destinations and a further 15 across Italy.

“After the restrictions of the past few years, it’s the ideal time to reinvigorate our international network and we’ll continue to look for new opportunities,” he said.

The new route is expected to entice more visitors to the west, with Qantas to partner with Tourism WA to boost inbound tourism from Europe into Perth and regional WA, as well as promote Perth as an ideal stopover for Australians travelling to Europe from the east coast.

WA Premier Mark McGowan said the new route was a “game-changer” to help WA reengage with the world.

“The new route will also open up our tourism industry to vaccinated overseas visitors, who will see Perth and WA as an appealing and safe destination with unique attractions that can’t be experienced anywhere else,” he said.

The announcement comes hot on the heels of WA’s international advertising campaign to attract tourists, students, investors, and workers back to the state.

The state’s border measures have been among the strictest in Australia since the pandemic began in March 2020 and kept most international and interstate visitors out for two years.

Despite reaching a vaccine coverage of 80 per cent this week, Mr McGowan announced WA would not reopen to interstate and international arrivals until February 5.

The new campaign, which is part of a $65 million marketing strategy by the state government, will use WA’s handling of the pandemic as a drawcard to attract visitors.

In a statement on Tuesday morning, the government said the state’s “high vaccination rate and strong management of the COVID environment will help deliver the state the softest landing to minimise the impact of the virus” once it reopens.

As of Wednesday morning, 80.3 per cent of people aged 12 and over had received two doses of the COVID-19 vaccine and more than 87 per cent received one dose.

However, immunisation rates remain patchy in large parts of the state.

Only 50 per cent of eligible residents in the Pilbara region had received a single dose of the vaccine and 37 per cent were fully vaccinated, one of the lowest immunisation rates in Australia.

The region, in the state’s north, is home to many remote Aboriginal communities.