And they’re off! Rishi Sunak and Liz Truss face Tory members (and Liz’s mum) TONIGHT for the first time as they take their fight to become party leader and PM to the people who will choose the winner

Liz Truss and Rishi Sunak faced Tory members tonight as the candidates to become party leader and prime minister faced a grilling from the people who will choose for the first time.

They took part in the first of 12 hustings in front of an audience of Conservatives in Leeds this evening after more than a week of mudslinging.

Mr Sunak was the first to address the audience, speaking without notes as he repeated his campaign mantra that inflation is the most dangerous economic problem facing the nation.

‘We need to grip inflation – it is the enemy that makes everyone poorer,’ he told the event at Leeds United’s Elland Road football ground.

But Liz Truss will be hoping for home advantage in the city where she was raised.  The Foreign Secretary arrived tonight with her mother Patricia, who still lives in the city.

It is the first sessions for party faithful across the country to quiz the final two candidates before voting for the next party leader and prime minister closes on September 2.

She earlier attempted to shore up her lead in the polls by backing Northern Powerhouse Rail in full and pledging to ‘turbocharge investment’ into the north of England. 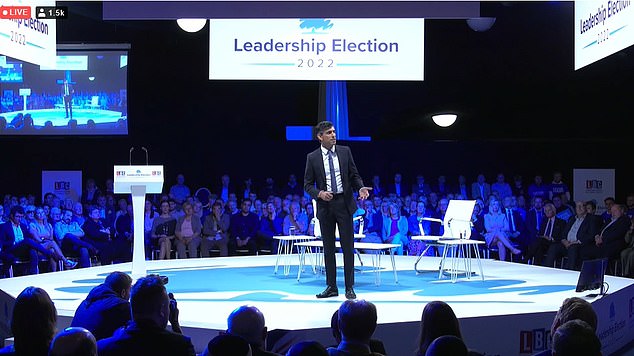 Mr Sunak was the first to address the audience, speaking without notes as he repeated his campaign mantra that inflation is the most dangerous economic problem facing the nation. 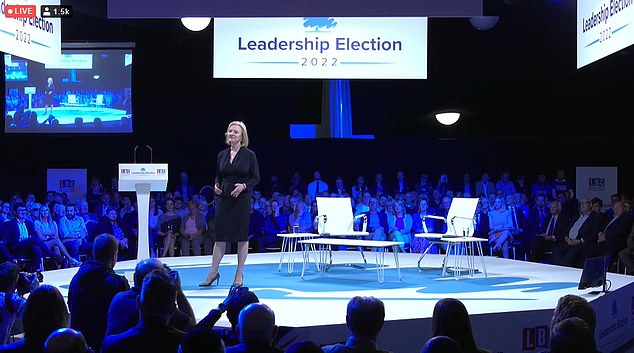 But Liz Truss will be hoping for home advantage in the city where she was raised. 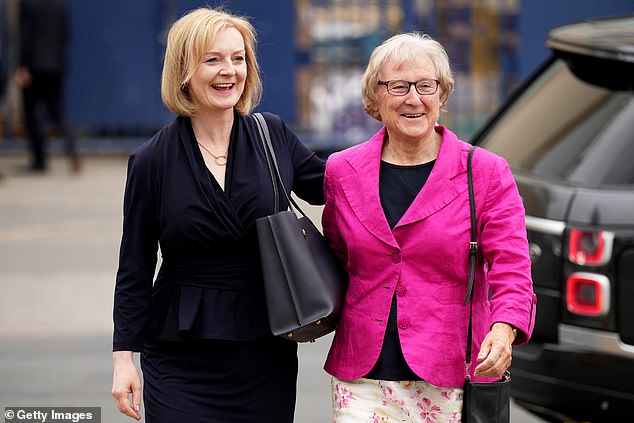 The Foreign Secretary arrived tonight with her mother Patricia 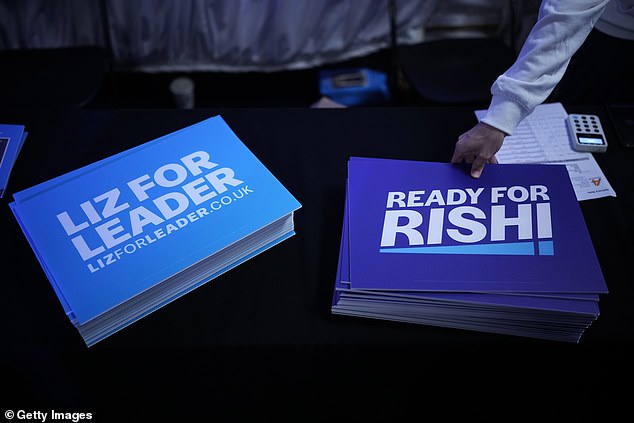 It is the first of 12 sessions for party faithful across the country to quiz the final two candidates before voting for the next party leader and prime minister closes on September 2.

During a visit to the Yorkshire city, Ms Truss insisted she is ‘completely committed’ to the scheme to improve rail connections between Liverpool and Leeds, which was originally announced by Boris Johnson but subsequently scaled back.

She told reporters: ‘I grew up in Leeds, I know how poor the transport is and frankly, it’s not got much better since I was a teenager getting the bus into Leeds city centre.

‘What I want to see is really fantastic rail services, better roads so people are able to get into work’.

Asked how she would afford the scheme, given the vast tax cuts she has pledged, Ms Truss said: ‘The taxes that I am cutting are affordable within our budget.

‘By creating new low tax investment zones in places like West Yorkshire, by enabling the post-Brexit reforms to take place, unleashing more investment from the city, we will grow the economy faster – that will bring in more tax revenue, and that will enable us to afford those projects’.

The Foreign Secretary also promised to ‘fix the Treasury’s funding formula’ if she gets the keys to No 10 to make sure the region gets a ‘fairer share’ of resources.

Ms Truss took a thinly veiled swipe at Mr Sunak, who is the MP for the North Yorkshire seat of Richmond, when she was asked whether he was as committed to the rail project, saying: ‘The thing about me is I’m prepared to take on the Whitehall orthodoxy, I’m prepared to challenge the groupthink that has, over decades, not put enough investment into this part of the country.’

The Foreign Secretary’s campaign was also buoyed by the endorsement of Jake Berry, leader of the Northern Research Group (NRG) of Tory MPs.

He described her as ‘the person with energy to bring action and delivery to make sure that we level up our United Kingdom’.

Ms Truss’s promises of vast tax cuts have helped her come out ahead in opinion polls and member surveys.

However, new YouGov polling suggests Mr Sunak has a significant edge over his rival among swing voters – 2019 Tory voters who are deserting the party, even as both candidates are ‘considerably unpopular’ with the public as a whole.

The poll is a boost for Mr Sunak, who is seeking to regain his footing after he was accused of ‘flip-flopping’ on his fiscal policy, as he pledged to temporarily slash VAT on energy bills despite repeatedly branding Ms Truss’s tax-cutting plans as ‘comforting fairy tales’.

Mr Johnson mocked his former chancellor over the U-turn, telling the Commonwealth Business Forum in Birmingham that his successor would ‘continue with the same programme’, including ‘getting rid of every encumbrance from Solvency II to MiFID to VAT on fuel – turns out to be easier than we thought’.

In his latest policy announcement, Mr Sunak said he would protect the ‘precious’ green belt as he argued more homes can be built on brownfield sites, a strategy described by critics as ‘just rhetoric’ that will do nothing to solve the housing crisis.

In the latest sign of the bitter, personal nature of the Tory leadership battle, Mr Sunak again faced an attack from Nadine Dorries over his disloyalty to the Prime Minister.

The Culture Secretary, an ally of Mr Johnson and now a supporter of Ms Truss, told BBC Radio 4’s Today programme: ‘I am bitterly disappointed that Boris Johnson was removed by a ruthless coup, as he was, led largely by Rishi Sunak.’

She defended her previous mockery of the millionaire former chancellor’s expensive attire and said she had warned that a contest to replace Mr Johnson would ‘unleash the hounds of hell’.

Mr Sunak, who admitted he is the ‘underdog’ in the contest an interview with Conservative Home, was praised for his ‘very good judgment’ by senior supporter George Eustice.

The Environment Secretary told Sky News: ‘I think that’s what our country needs as we try to chart our way out of these difficult times’.

Former chief whip Mark Harper, another ally of Mr Sunak, defended the ex-chancellor’s decision to announce his pledge to cut VAT from domestic energy bills for a year at this stage in the race.

Asked why Mr Sunak did not open his campaign with those plans, Mr Harper told BBC Newsnight: ‘He’s announced it because it looks like the energy price cap may rise higher by several hundred pounds than we had thought it would.

‘And he’s always said very consistently, that if he needed to do more, he would’.

The hustings in Leeds comes as mayors from across the North of England have written to the two contenders to express concerns about the Government’s plans for northern transport.

Andy Burnham, Tracy Brabin, Steve Rotheram, Oliver Coppard and Jamie Driscoll called on the winning candidate to meet with them to agree a ‘better way forward for the North’.

‘This is a critical decision that will affect the lives of generations of Northerners to come. We owe it to them to show the highest possible ambition for what the North of England can be in the future,’ they wrote.

Both candidates were urged by consumer champion Martin Lewis to thrash out an emergency package of support to help families ‘panicking’ over skyrocketing energy bills.