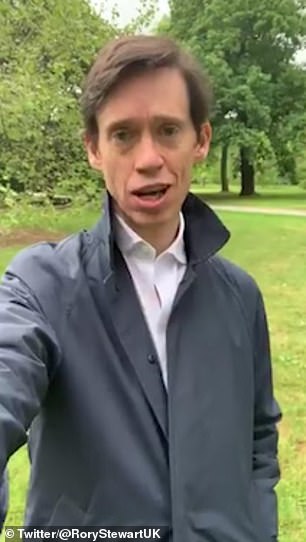 The International Development Secretary dismissed jibes from rival camps that he is attacking Brexiteers to aid the Environment Secretary – who is running against Boris Johnson for the second time.

Mr Stewart, who only joined the Cabinet a few weeks ago, announced he was planning to run to replace Theresa may as party leader even before she stood down last week.

His candidacy prompted a suggestion that he was paving the way for someone else, because as a Remainer he has little to no chance of winning.

But he rejected claims he is ‘running tactically’ for the Tory leadership.

After a journalist suggested some Tory MPs saw Mr Stewart as a ‘suicide bomber’ for Michael Gove, the International Development Secretary replied: ‘Putting aside the fact that your suicide metaphor sits a bit awkwardly for someone who was in Iraq and Afghanistan – I’m not running tactically – I am running on principle and because I believe we can unify this country and make it a much better place – why don’t they debate me?’

Hours earlier outsider Rory Stewart filmed himself in Kew Gardens and told his followers he was there for an hour ‘if anyone wants to talk’.

Some viewers joked that they would have loved to but asked him to pay the £18-plus entrance fee.

The DfiD minister was there to promote his department’s work with cocoa farmers around the world – around an hour after extolling the benefits of drinking camel’s milk on Good Morning Britain.