Russian police have raided the homes of two allies of the jailed Kremlin critic Alexei Navalny, with one facing up to 12 years in jail, a prominent activist said.

The move came on a day that saw Russia’s Supreme Court ordering the closure of the country’s largest rights group Memorial International.

Russia in June branded Navalny’s political organisations ‘extremist’, prompting his team to shut down the regional network that supported his political campaigns and corruption investigations.

Almost all of his top allies have since fled the country. 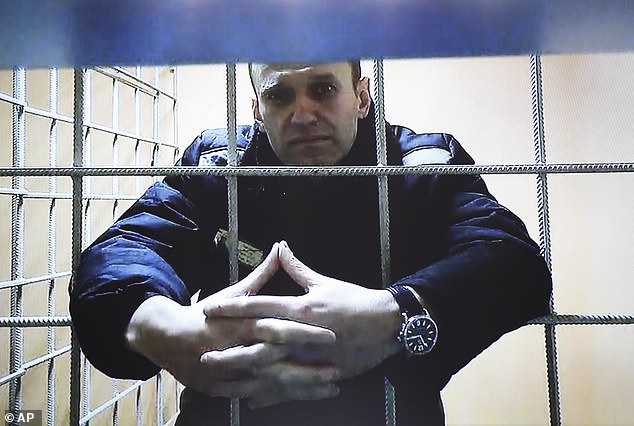 Russian police have raided the homes of two allies of the jailed Kremlin critic Alexei Navalny, with one facing up to 12 years in jail. Pictured: Navalny appears in the Petushinsky court via video link at a hearing on his lawsuit against his prison colony classifying him as posing a potential extremist or terrorist threat

Then, after his allies regrouped around a new network of organisations set up for Russia’s parliamentary election in September, authorities started investigating campaign staffers on the same extremism charges.

Leonid Volkov, the ex-head of the regional network, said on Tuesday that investigators had raided the homes of the former office coordinators in the Siberian regions of Irkutsk and Tomsk – Zakhar Sarapulov and Ksenia Fadeyeva, who is also a local lawmaker.

Volkov, who now resides in EU member Lithuania, said on Telegram that the pair were later brought in for questioning.

He added that Navalny’s allies had also lost contact with a third ex-coordinator in the Siberian region of Altai.

Volkov said he had tried to persuade both Fadeyeva and Sarapulov, to leave Russia, as he and a number of other dissidents have done, but they refused.

Navalny ally Ivan Zhdanov, who also left Russia earlier this year, tweeted that Fadeyeva, 29, had been charged with creating or participating in an extremist organisation while using an official position.

The charge carries a penalty of between seven and 12 years in prison. 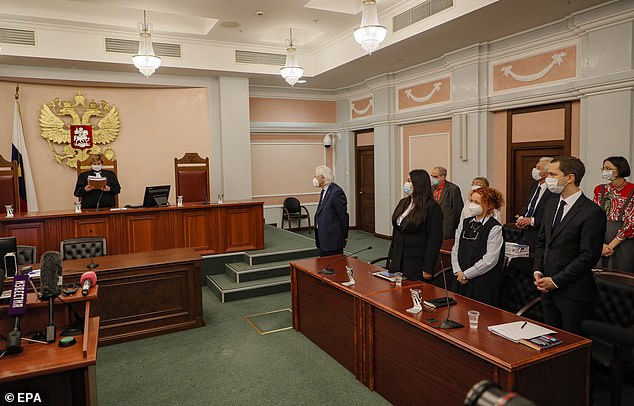 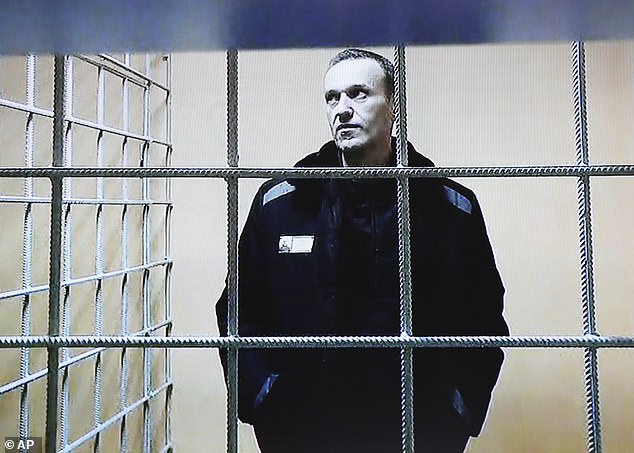 The Investigative Committee, the state body tasked with investigating crimes and pressing charges, could not immediately be reached for comment on the case.

Navalny was flown to Germany last year for medical treatment after being poisoned in Siberia with what Western experts concluded was the military nerve agent Novichok.

The Russian government has denied it was behind the poisoning and rejected the experts’ findings – which prompted a fresh wave of sanctions against Russia – and accused the West of a smear campaign against it.

Navalny was touring Siberia at the time of the poisoning in support of opposition candidates for local office. Fadeyeva, 29, won election the next month.

She faces between six and 10 years in prison on charges of creating an extremist organisation.

Critics say Navalny’s decision to return to Russia in January following treatment in Germany triggered an unprecedented crackdown on the opposition, independent media and rights organisations. Navalny was jailed in February on old embezzlement charges.

The move to raid the homes of Navalny’s allies and detain them on Tuesday came on the same day the country’s Supreme Court ruled that the human rights organisation Memorial should be shut down.

It is the latest step in a months-long crackdown on rights activists, independent media and opposition supporters. 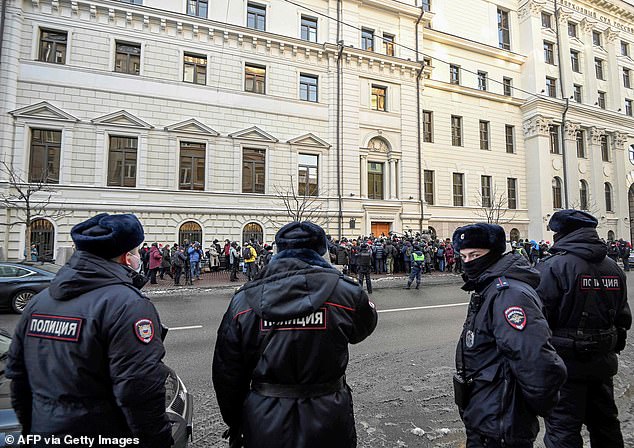 The Prosecutor General’s Office last month petitioned the Supreme Court to revoke the legal status of Memorial – an international human rights group that rose to prominence for its studies of political repression in the Soviet Union and currently encompasses more than 50 smaller groups in Russia and abroad.

The court on Tuesday ruled in favor of the prosecution, which charged at the hearing that Memorial ‘creates a false image of the USSR as a terrorist state, whitewashes and rehabilitates Nazi criminals.’

A video tweeted by the independent Mediazona news outlet showed a large crowd of people in front of the courthouse chanting ‘Disgrace!’ in response to the ruling.

Memorial was declared a ‘foreign agent’ in 2016 – a label that implies additional government scrutiny and carries strong pejorative connotations that can discredit the targeted organization. In their lawsuit to shut it down, prosecutors alleged that the group repeatedly violated regulations obliging it to mark itself as a foreign agent, and tried to conceal the designation. 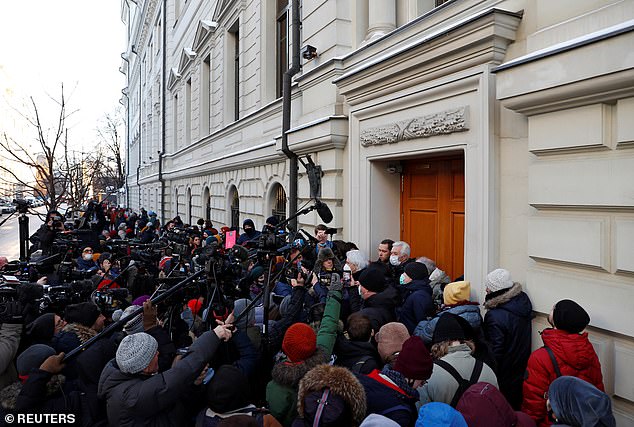 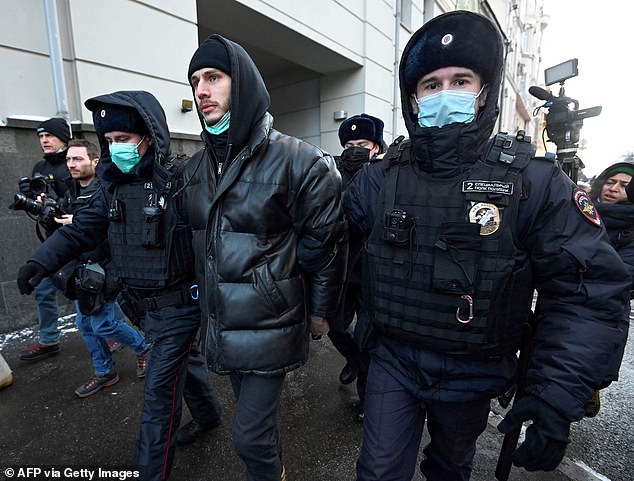 Memorial and its supporters have maintained the accusations are politically motivated, and the organization’s leaders have vowed to continue their work even if the court shuts it down.

‘Of course, nothing is over with this,’ Maria Eismont, one of the lawyers that represented the group in court, said after the ruling. ‘We will appeal, and Memorial will live on with the people – because it’s the people behind it serving this great cause first and foremost. The work will continue.’

Pressure on the group has sparked public outrage, with many prominent figures speaking out in its support this month. Several people were reportedly detained on Tuesday for picketing the courthouse.

Memorial’s branch, the Memorial Human Rights Center, is up for closure as well, with a court hearing in the Moscow City Court scheduled for Wednesday morning.

Russian authorities in recent months have mounted pressure on rights groups, media outlets and individual journalists, naming dozens as foreign agents. Some were declared ‘undesirable’ – a label that outlaws organizations in Russia – or accused of links to ‘undesirable’ groups, several were forced to shut down or disband themselves to prevent further prosecution.

On Saturday, the authorities blocked the website of OVD-Info – a prominent legal aid group that focuses on political arrests – and urged social media platforms to take down its accounts after a court ruled that the website contained materials that ‘justify actions of extremist and terrorist groups.’ The group rejected the charges as politically driven.

OVD-Info condemned the ruling to shut down Memorial.

‘Memorial is an institution of national memory about the times of the Great Terror and Soviet repressions,’ the group said in a statement.

‘To shut down such an institution is to publicly justify Stalin’s repressions,’ it said. ‘It is a clear signal both to the society and to the elites: `Yes, repressions were necessary and useful to the Soviet state in the past, and we need them today as well.”