Kyiv’s forces are making unexpected and rapid advances in the north east of the country as they retook more than a third of the Russian occupied Kharkiv region in three days. The Russian Defence Ministry confirmed much of the gains made by Ukraine on Saturday.

Taras Berezovets, a former national security adviser turned press officer for the Bohun brigade of Ukraine’s special forces, said that Russian forces were forced to “panic and flee” as a result of the disinformation campaign.

He said: “[It] was a big special disinformation operation.

“[Russia] thought it would be in the south and moved their equipment.

“Then, instead of the south, the offensive happened where they least expected, and this caused them to panic and flee.” 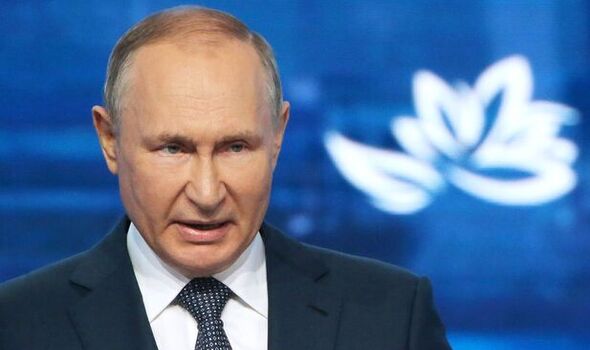 On August 29 the Ukrainian southern command announced that the offensive in the Kherson region had begun.

However, soldiers on the Kherson frontline said that they saw no sign of an offensive.

Ukrainian forces did take a number of villages in the region over the next fortnight.

These gains were, however, generally in keeping with the modest Ukrainian gains in the Kherson region over July and August.

The capture of these small villages suddenly became major international headline news which appears to have been part of a coordinated media campaign by Kyiv.

A spokesperson for Ukraine’s southern command Natalia Humeniuk had insisted on a “regime of silence” and temporarily banned journalists from visiting the frontlines in Kherson.

The operation was successful in encouraging Russia to move equipment and personnel to the southern front.

According to a military source, the aim of the operation was to route out informants in the Ukrainian controlled areas of Kharkiv in order to stop them passing information about the operation to Russia.

They said: “The [informants] were almost completely cleaned up.

“The Russians had no idea what was going on.”

He said: “A three-day operation was carried out on the drawdown and organised transfer of the Izium-Balakliia group of troops to the territory of the Donetsk People’s Republic.

“In order to prevent damage to the Russian troops, a powerful fire defeat was inflicted on the enemy.”