TEARFUL mourners today gathered at the spot tragic Sarah Everard was last seen as vigils were cancelled across the UK.

Crowds had been planning to meet in Clapham Common in solidarity with the 33-year-old.

? Follow our live blog for the latest developments on the Sarah Everard case 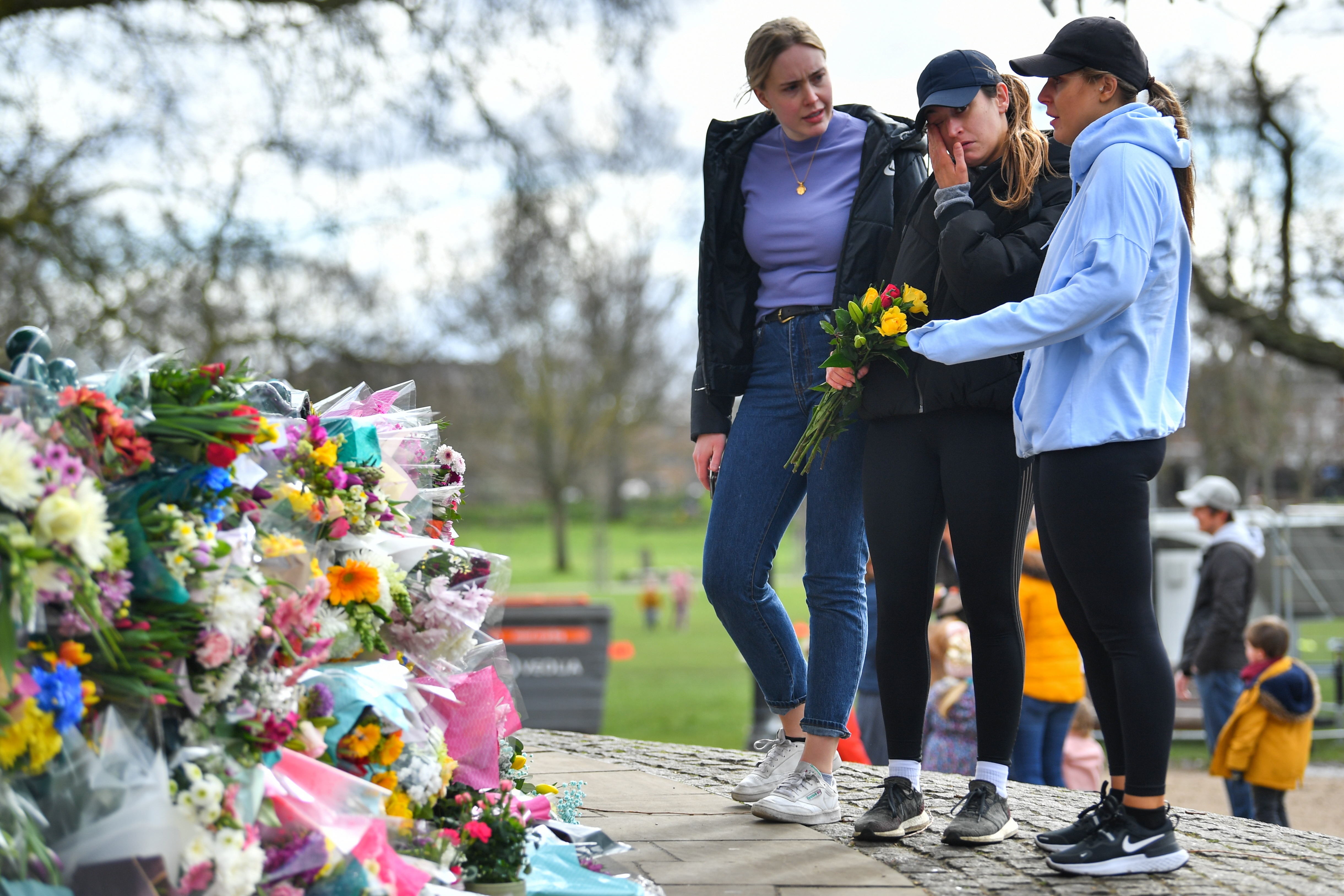 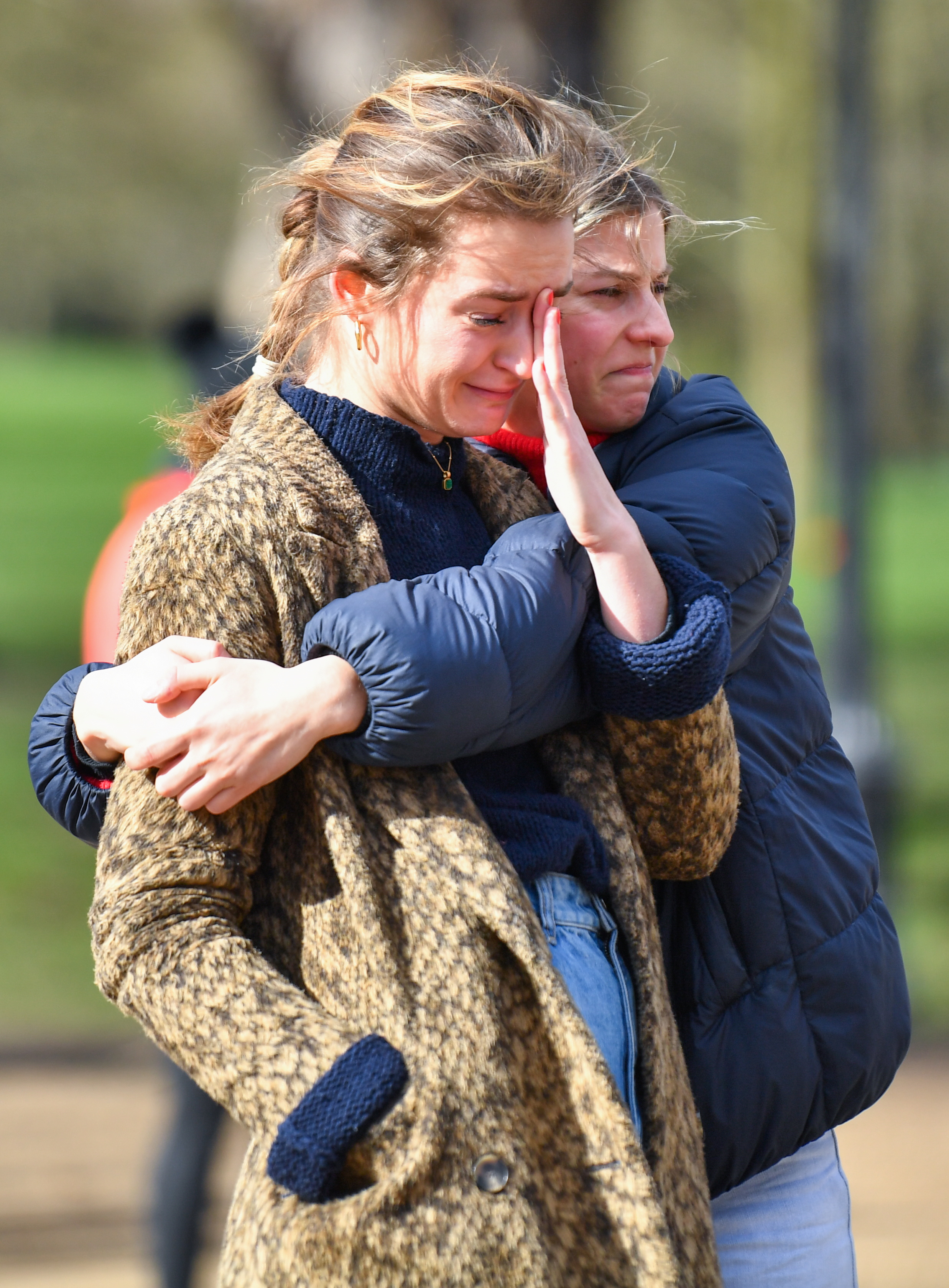 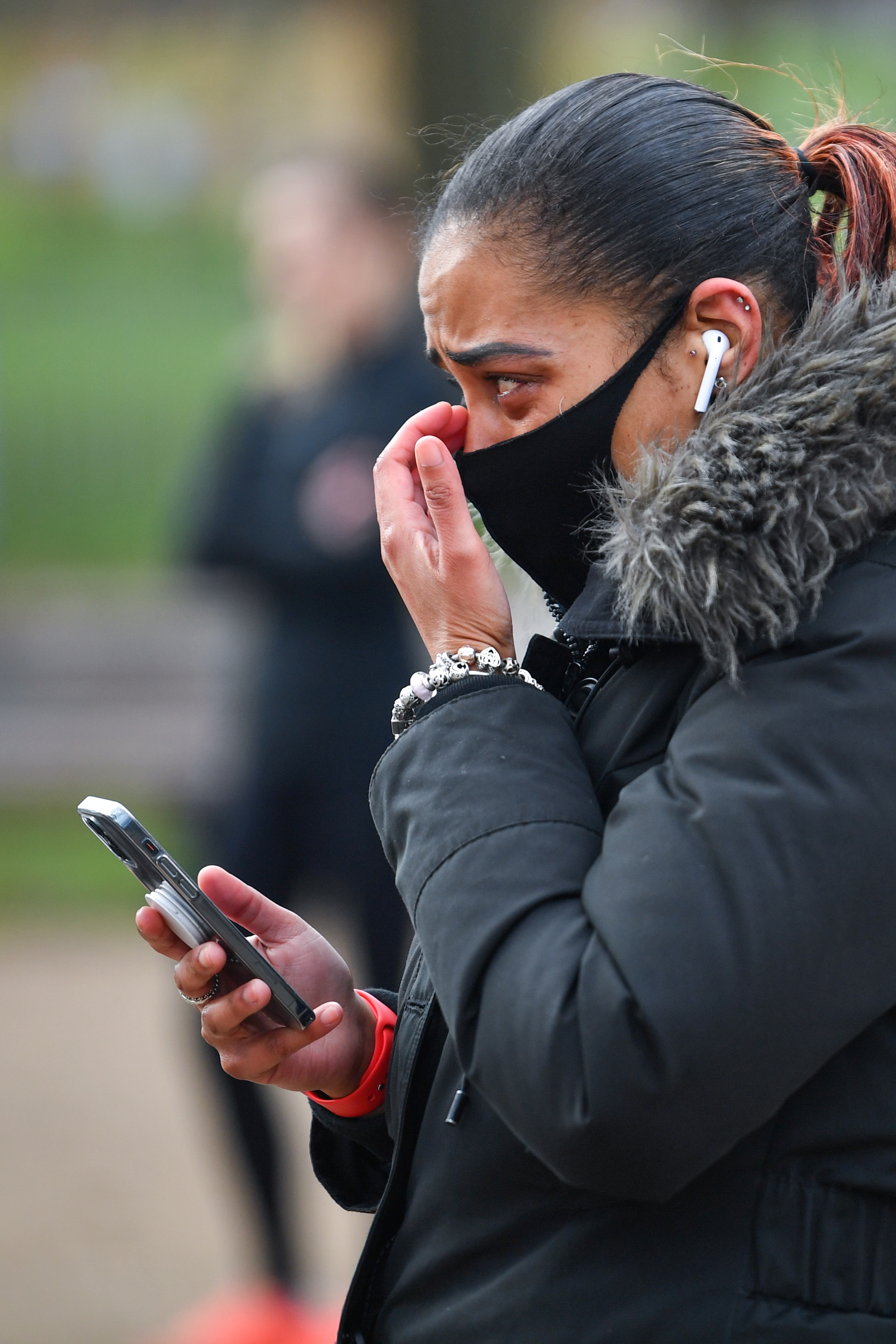 Vigils were also due to take place at 6pm in cities across the UK – including Liverpool, Leeds, Birmingham, Belfast and Cardiff.

Campaign group Reclaim These Streets mounted a High Court challenge on Thursday, claiming the Met reversed the decision to permit Saturday's event in London in an attempt to ban it.

But the High Court upheld the police's decision to block the event – forcing organisers to cancel vigils across the UK.

A small, socially-distanced group lay flowers at the bandstand in Clapham Common this afternoon despite the ban.

Some mourners were seen in tears as they gathered to pay tribute to the marketing manager, who vanished on March 3. 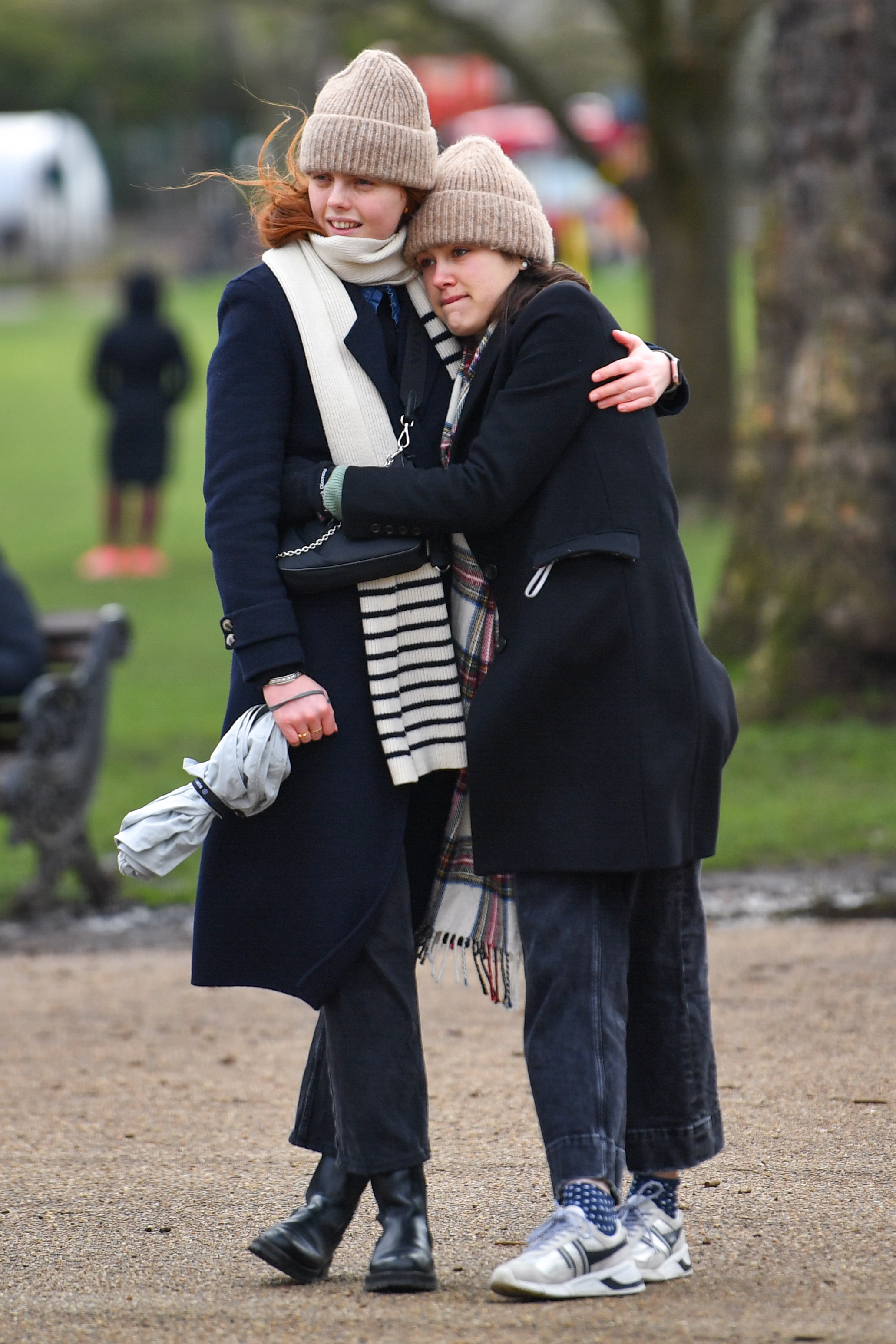 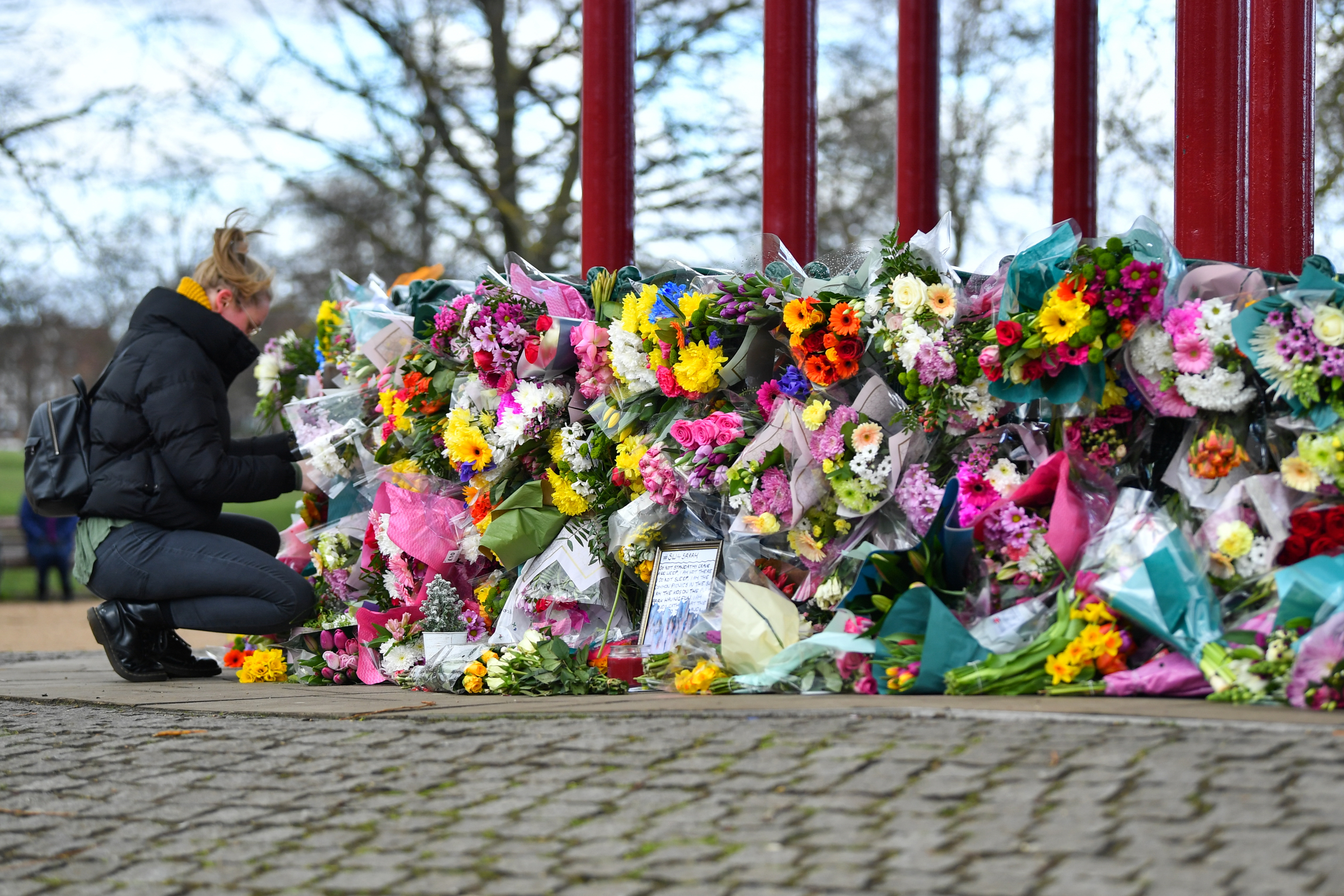 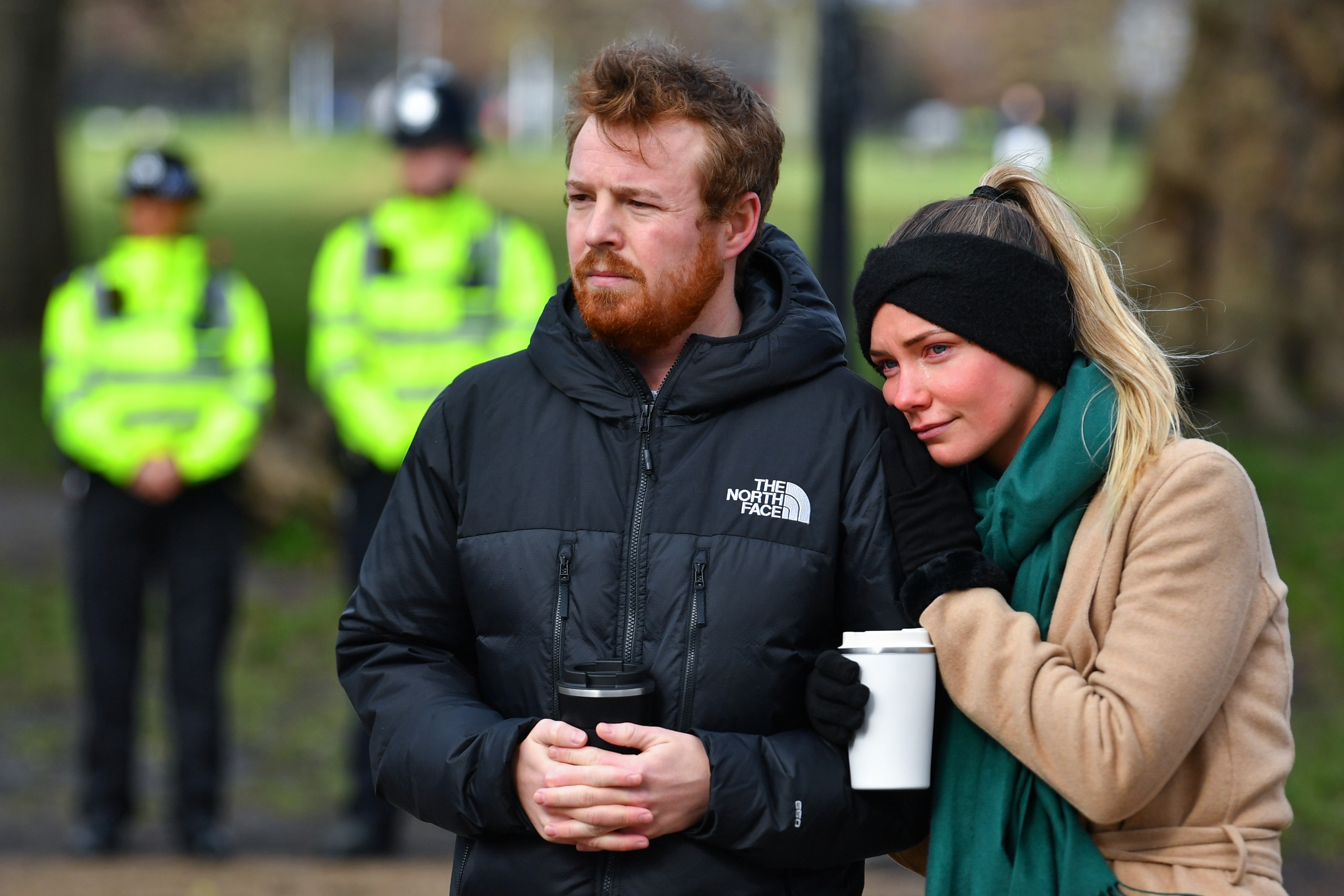 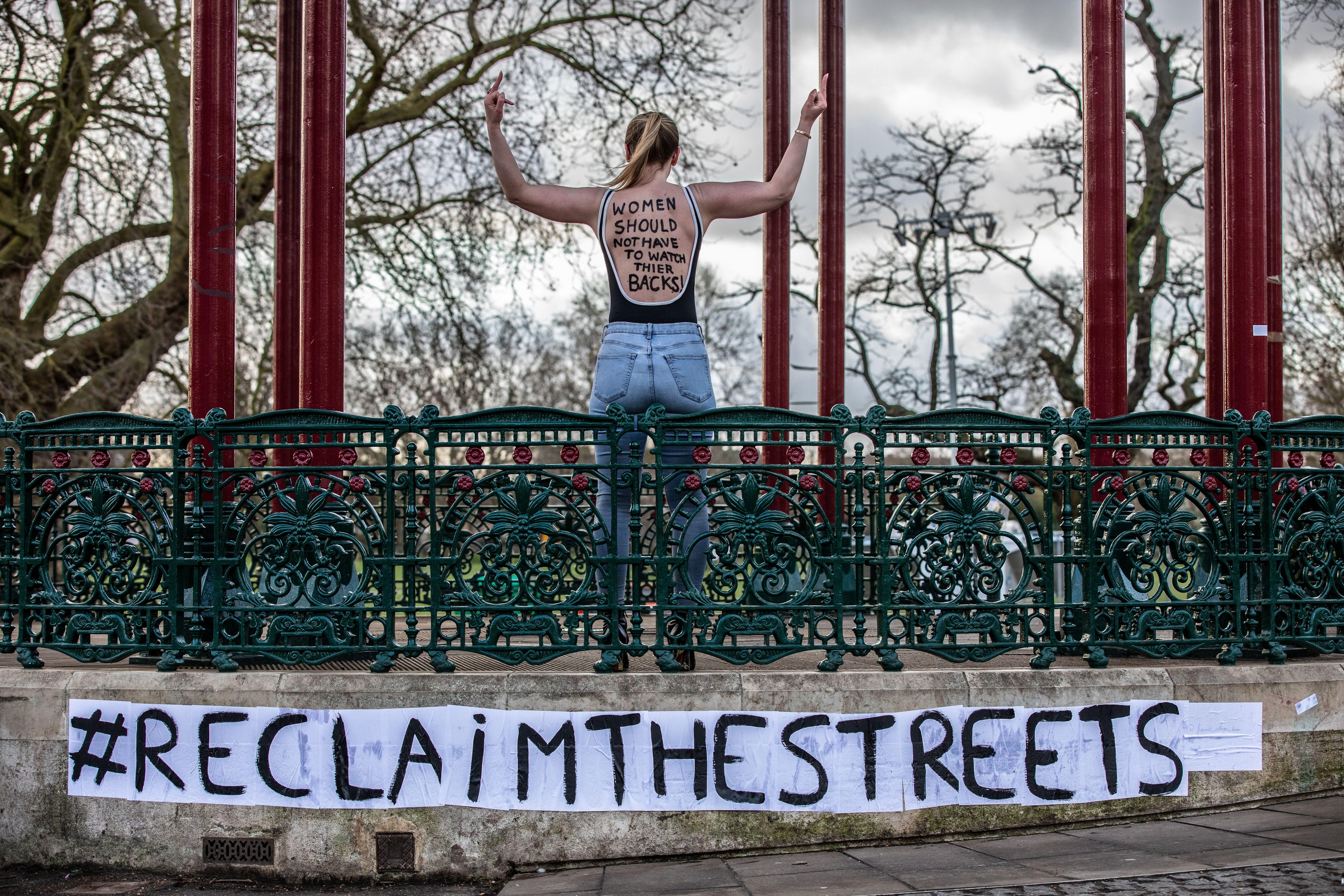 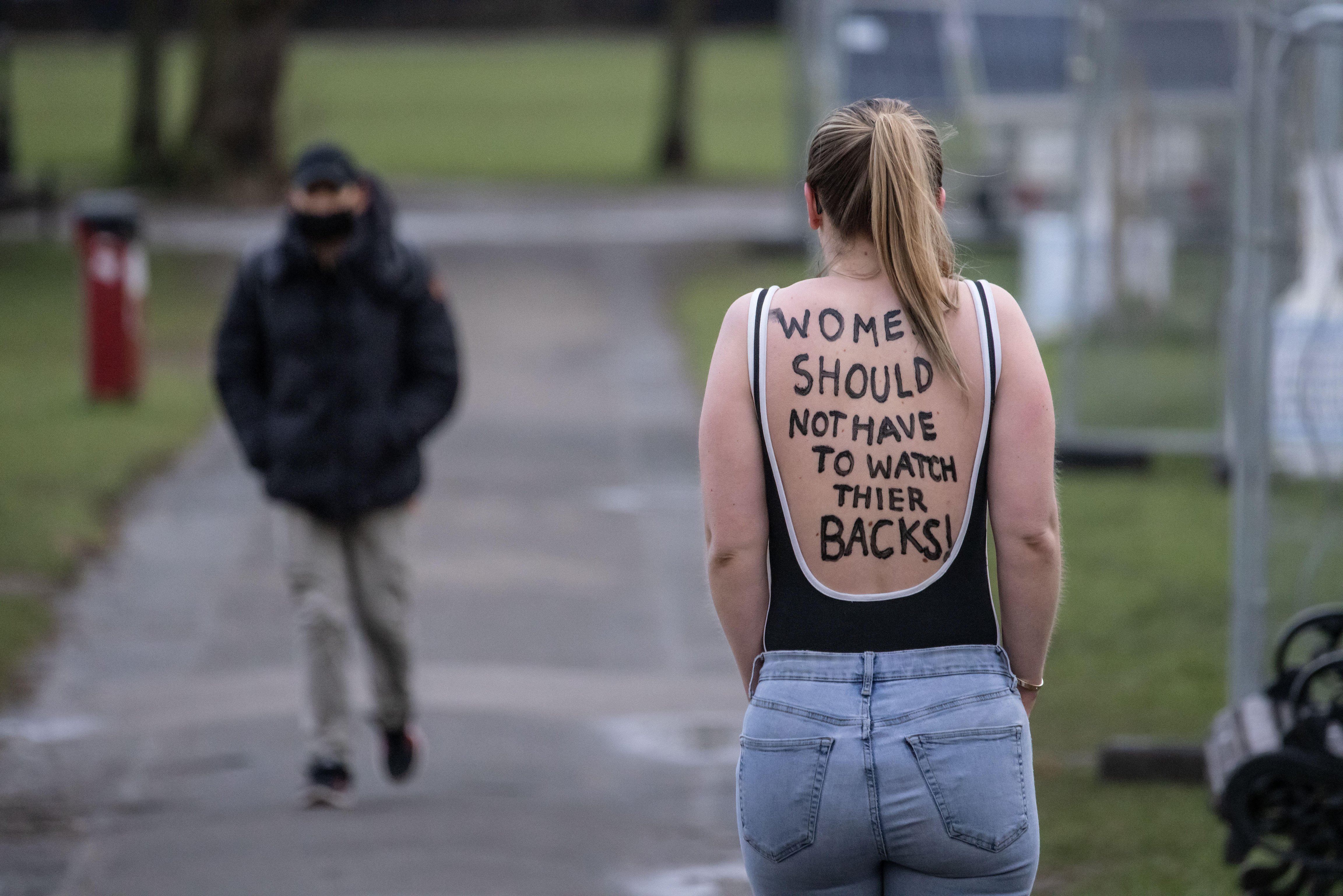 It comes after Reclaim the Streets slammed the police after revealing they were threatened with a £10,000 fine under Covid laws if the events went ahead.

They also accused cops of being "unwilling to engage" and are now urging people to take part in a doorstep vigil at 9.30pm.

The campaign group said it would be joining people across the country and "shining a light – a candle, a torch, a phone – to remember Sarah Everard and all the women affected by and lost to violence".

A fundraising page they launched has already raised more than £100,000 in around four hours for women's charities. 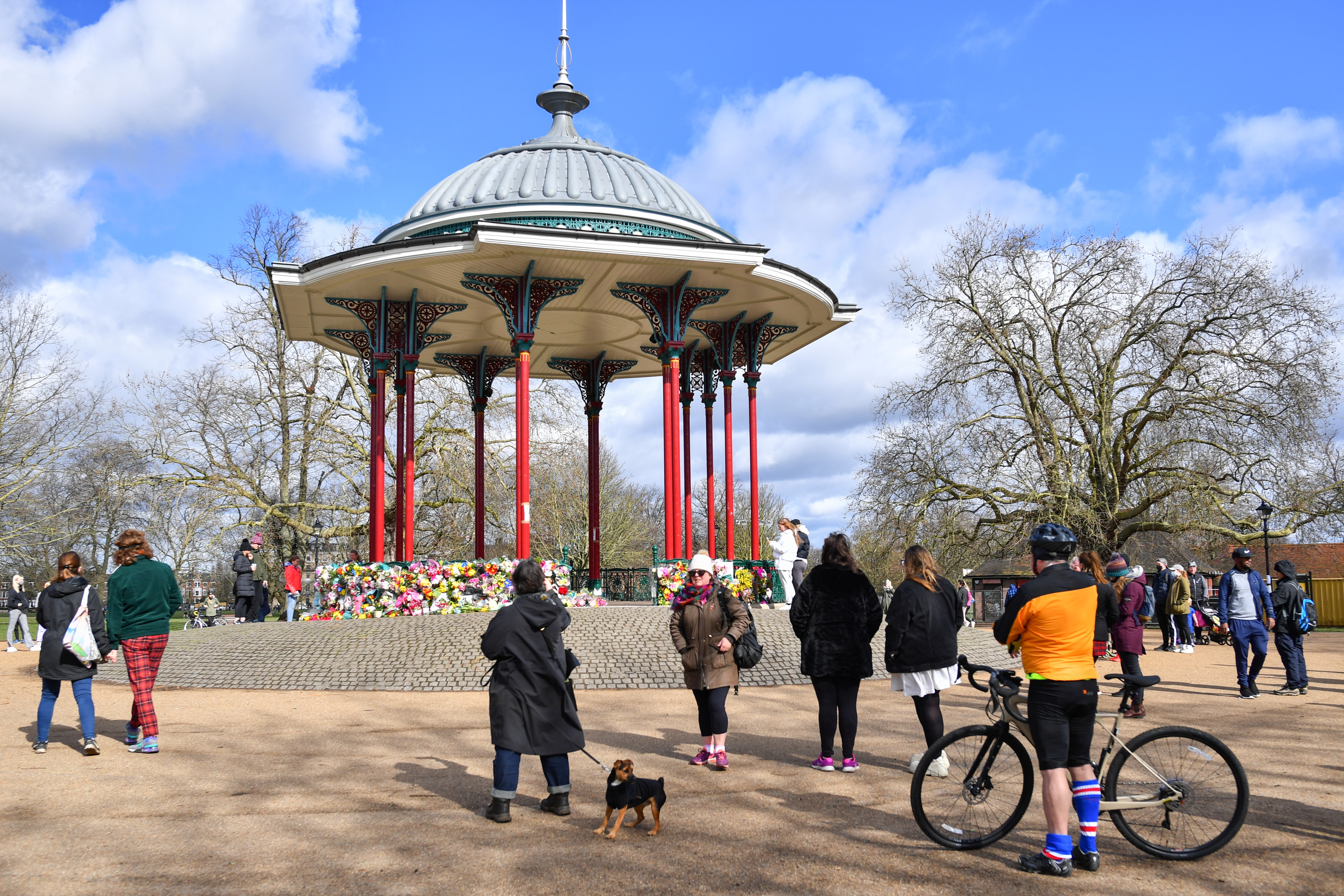 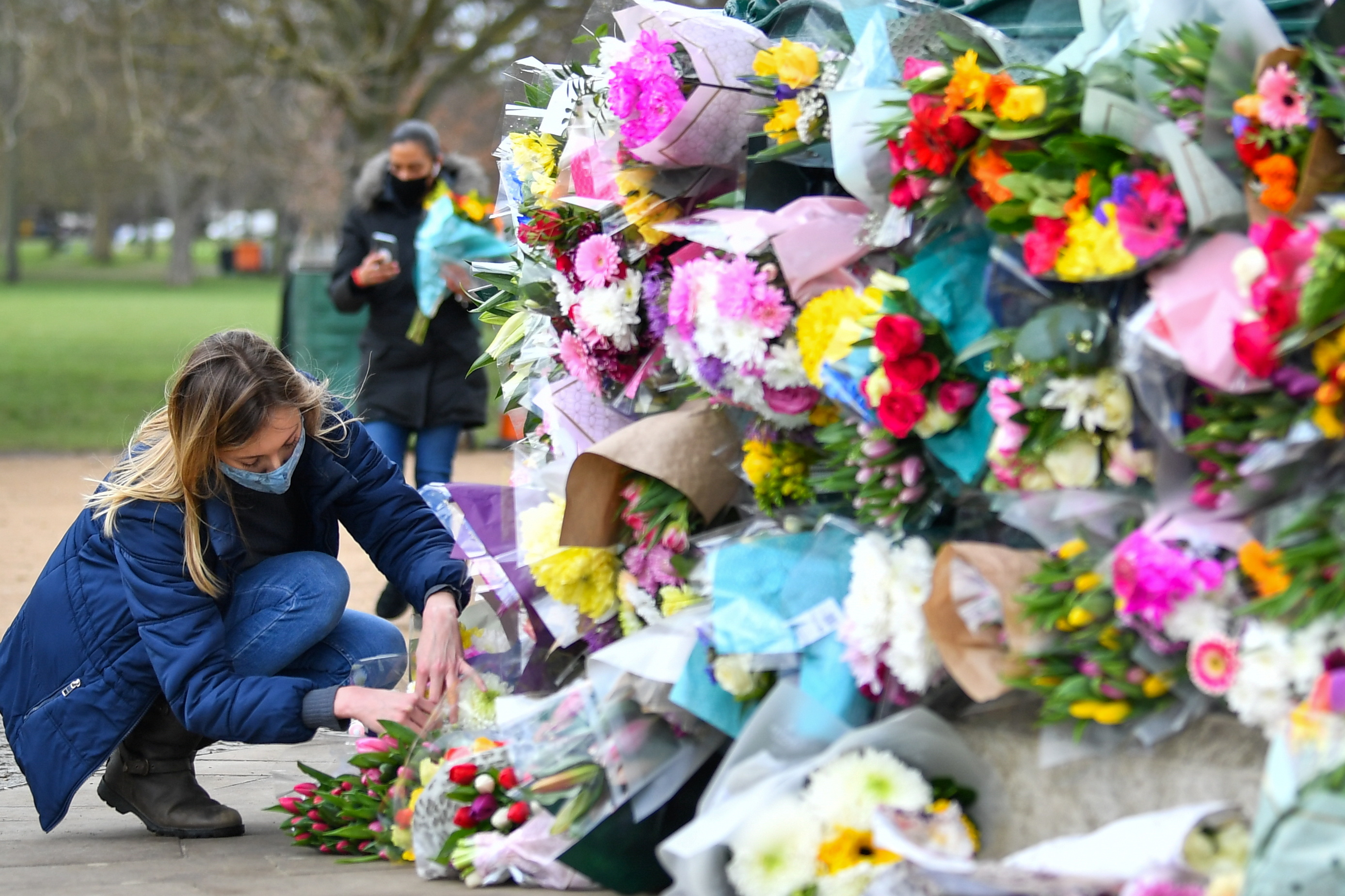 The Met Police today said they take "no joy"in the cancellation but insisted it was the "right thing to do".

Greater Manchester Police said they were "shocked and saddened" about Sarah's death but warned "gathering in large groups is still unlawful".

While West Midlands Police said: "We understand the strength of feeling and people’s desire to come together to mourn and show respect to Sarah Everard as well as to make a statement and organise on the issue of women’s safety.

"We’d ask that anyone who is considering still turning up later, or arranging their own event, remembers that current Covid-19 regulations do not permit large gatherings because of the very real risks of the spread of the virus.."

Reclaim the Streets statement in full

We have been in discussions with the Metropolitan Police since day one of planning today's vigil.

Following yesterday's hearing, we continued those discussions, and repeated tried to find a way forward for the event.

At our meeting yesterday evening we made many suggestions, including staggering start times, splitting the event into time slots and several other ideas to accommodate police concerns – as well as asking the police for their own suggestions. We have made every effort to reach a positive outcome that applies proportionality, so that we could find an appropriate balance between our right as women to freedom of assembly and expression with the regulations set out in Covid regulations.

We have been very disappointed that given the many opportunities to engage with organisers constructively, the Metropolitan Police have been unwilling to commit to anything. While we have had positive discussions with the Lambeth officers present, those from Scotland Yard would not engage with our suggestions to help ensure that a legal, Covid-secure vigil could take place.

It remains our view that with the appropriate mutually agreed measures in place, this evening's vigil on Clapham Common would have been safe and in life with restrictions and safety regulations.
However, in light of the lack of constructive engagement from the Metropolitan Police, we do not feel that we can in good faith allow tonight's even to go ahead.

As the event has now been cancelled, we would strongly encourage people not to gather this evening on Clapham Common.

Despite the court judgment, the feedback from police is that doing so may place yourself legally at risk. Furthermore, the Covid-secure event marshalling we would have provided will now not be taking place.

We will be announcing the details of a virtual gathering later today and would encourage all those originally planning to join us on Clapham Common to take part.

We intend to publish open advice later today from our lawyers which may be helpful to others who have organised vigils around the country and been approached with misleading interpretations of the ruling by their local Police force.

We appreciate the outpouring of support over the past 48 hours, and we are clear that women's voices will not be silenced, now or ever.
We were told that pressing ahead could risk at £10,000 fine each for women organising. Even if we came to this amazing community for help in meeting those costs, we think that this would be a poor use of our and your money.

We do not want to see hundreds of thousands of pounds contributed to a system that consistently fails to keep women safe – either in public spaces or in the privacy or their homes.

Women's rights are too important. So instead, we are setting up a fundraisers to raise the money we would have been liable for in fines to donate to supporting women's causes around the country. We will also be donating the remaining funds of our legal costs crowdfunder to this charitable fund.

And finally but most importantly, we would like to end by expressing our sincerest condolences to the family and friends of Sarah Everard.
Among the to-and-fro with police, the court case and pundits, sometimes the news stops feeling personal.

We want to remember that at the heart of this story is a young woman who isn't going home tonight, and a family who have lost a daughter and a sister.

But some people say they are still planning to attend the vigil for tragic Sarah, who vanished last Wednesday as she walked home.

Becki Elson yesterday said she would attend Clapham Common Bandstand at 6pm on Saturday with her 19-year-old daughter Megen.

She said: "Even if no one else shows up, we will take a moment to remember Sarah and leave a candle for her.

"It's time for women to fight back, to take control, to lead the way out of this nightmare that has lasted the entire span of human history."

Sisters Uncut, which campaigns to prevent violence against women, tweeted: "We will still be attending tonight's event in memory of #SarahEverard and all those killed by gendered and state violence.

"We hope you do too. See you at Clapham Common at 6pm."

Anna Birley, an organiser of the vigil, earlier told BBC Radio 4's Today programme that "sadly" the vigil will not go ahead because "we don't in good faith think that we can".

She added: "In part because of the massive individual risk that gives us as organisers and that we don't want to be putting women at risk of fixed-penalty notices.

"All the women across the country who are seeking to organise their own events too are at risk of criminal prosecutions from the Serious Crimes Act, which is what we've been threatened with."

Senior Conservative MP Caroline Nokes, who had previously said she asked Home Secretary Priti Patel to "step in" and allow the vigil to go ahead, said she hoped people would now take the advice of organisers to gather virtually instead.

While Labour's Harriet Harman, who chairs the Joint Committee on Human Rights, said the law on freedom of association amid the coronavirus pandemic should be clarified.

She told BBC Radio 4's Today programme: "We have said previously that the law on this should be made clearer.

"The relationship between the Human Rights Act and its protection of freedom of association and the new Covid regulations has not been clearly spelt out.

"The police's response to do a blanket ban, to say we can treat everybody equally by stopping all freedom of associations, is not the right way to go about it."

Campaigners for the vigil sought a declaration on the "correct legal position" from the High Court yesterday over the current lockdown laws, which neither ban nor allow protests.

But judge Mr Justice Holgate said it would not be "appropriate for the court" to make the declaration sought.

He ruled that "the requirements of the law have been clearly stated" in previous court rulings, including a challenge to Covid-19 lockdown rules brought by businessman Simon Dolan, which was dismissed by the Court of Appeal in December.

The judge also said: "Given what has happened at the hearing, it may well be that there will be further communication between the claimants and the solicitors they instruct and the police to deal with the application of the regulations and (the rights to freedom of expression and assembly) to this particular event."

Reclaim These Streets said it had originally received a positive response from the Met Police and Lambeth Council over holding a vigil.

However, police bosses later changed their position saying the event would be unlawful and that the organisers would face a £10,000 fine under new coronavirus laws.

Sarah's death has prompted an outpouring of grief from the public, with many women and girls sharing stories online of experiencing violence by men.

The Reclaim These Streets marches were designed to show that women should feel safe no matter the time of day.

Commander Catherine Roper, the Met’s lead for Community Engagement, said: “I would like to thank the organisers of tonight’s vigil in Clapham Common for cancelling the gathering. Since Sarah’s disappearance, we have shared Londoners anguish, shock and sadness at the truly awful circumstances of her disappearance and death.

“I know that yesterday’s ruling would have been unwelcome news for the organisers and to those who were hoping to join others in tribute to Sarah and to make a stand on violence against women.

“While it is clear we cannot do this together on Clapham Common, I know there are various others ways to mourn Sarah in a safe way.

“We take no joy in this event being cancelled, but it is the right thing to do given the real and present threat of Covid-19. Throughout the week we have had a number of talks with the organisers of the vigil. These talks have undoubtedly been challenging and officers have worked hard to explain the regulations and why gatherings such as this cannot go ahead at this time.

“While we understand their frustrations of this cancellation and share the nation's outrage at this crime, we must all continue to work together to fight Covid-19 and keep each other safe.

“Throughout the day we will have officers on patrol throughout the capital. We are there to keep people safe and will be highly visible and supporting our communities.”

It comes as armed cop Wayne Couzens was last night charged with Sarah's kidnap and murder.

Sarah's family on Thursday paid tribute to their "bright and beautiful daughter and sister".

In a statement, Sarah's family said: "Our beautiful daughter Sarah was taken from us and we are appealing for any information that will help to solve this terrible crime.

"Sarah was bright and beautiful – a wonderful daughter and sister. She was kind and thoughtful, caring and dependable. She always put others first and had the most amazing sense of humour.

"She was strong and principled and a shining example to us all. We are very proud of her and she brought so much joy to our lives.

"We would like to thank our friends and family for all their support during this awful time and we would especially like to thank Sarah’s friends who are working tirelessly to help."