Existing and emerging technology should enable fire agencies to extinguish dangerous fires within an hour by 2025, reducing impacts on communities and wildlife alike, according to research backed by billionaire couple Andrew and Nicola Forrest.

The program – dubbed the "Fire Shield" and supported by a $70 million grant from the Forrests' Minderoo Foundation – is already working with agencies across Australia to improve the identification of ignition points and to predict which have the potential to become disasters. 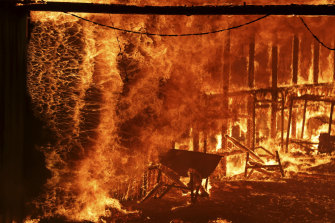 Technology advances could make it possible to extinguish dangerous fires within an hour by 2025, according to a target set by the Minderoo Foundation.Credit:Alex Ellinghausen

The plan, to be unveiled at the National Press Club in Canberra on Tuesday, will aim to use satellites and sensors to automate detection of fires. At present, about 95 per cent of fires are reported through triple-zero phone calls, with people also staffing fire towers looking for smoke.

Data networks developed overseas can detect fire within three minutes but have not been tested in Australia, the Minderoo Foundation said in a "blueprint" report on the scheme.

"We want to push the boundaries of science and technology," said Adrian Turner, the chief executive of the foundation's Fire and Flood Resilience plan, and a former head of CSIRO's Data61 division. "We think we can make strong progress."

The NSW Bushfire Inquiry highlighted the potential for improvement in technology after last season's record fires scorched more than 5 million hectares in the state alone. Not only were fire agencies often reliant on aircraft to identify the fire front, they also struggled, at times, to get timely information out to communities at risk.

The Foundation says more than 50 private and government partners are involved, some of which will be present at Tuesday's launch.

The scope for gains is great, ranging from better estimates of fuel loads in the landscape and how hazard-reduction burning can be better targeted, to the use of drones and other autonomous vehicles to put fires out before they threaten people, property and ecosystems.

Mr Turner is no stranger to fire threats. He and eight others were forced to seek refuge in a property in the Kangaroo Valley during last January's fires, and then defend it after a pyrocumulous cloud collapsed over it, dumping embers over it and neighbouring homes. 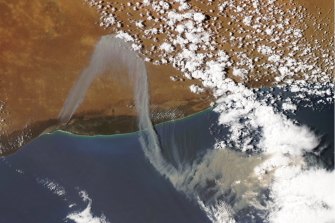 The technology will use satellites and sensors to spot fires early. Credit:Australian Firefighters Climate Alliance

The NSW Rural Fire Service turned up the next day with nine body bags, expecting to find no survivors.

"It was just walls of flames," Mr Turner said. "We saved the house but the landscape was lunar."

Mr Forrest was not aware of the travails when he rang only a few days later to offer the position of heading his foundation's resilience unit, Mr Turner said.

The most important news, analysis and insights delivered to your inbox at the start and end of each day. Sign up to The Sydney Morning Herald’s newsletter here, to The Age’s newsletter here and Brisbane Times‘ here.