“I saw a lot of people online frustrated about failing to get appointments,” Haber says.

“I am very familiar with navigating these online systems through years of trying to get Bruce Springsteen tickets through Ticketmaster. I thought I could put my Springsteen skills to work to help others get appointments.”

When Haber sees a batch of new appointments open up – for example at the Javitz Centre, a mass vaccination site in Manhattan – he sends out a call on Twitter for people to send him their details so he can make appointments for them. He recently found himself toggling between four screens in order to book as many appointments as possible. 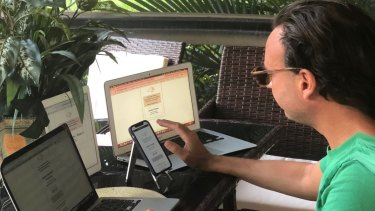 Haber says people have offered to pay him hundreds of dollars for an appointment, but he insists on doing it for free.

“This is very stressful,” he says. “People are very anxious to get their appointments and if you’re not familiar with these systems you can make mistakes.”

He says it doesn’t help that the cohort most likely to die of the virus – senior citizens – is the least likely to have the online skills required to snag an appointment. 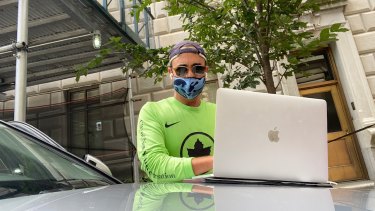 America’s vaccine rollout has been improving steadily in recent weeks: the country is now averaging two million jabs a day, up from 1.5 million a day a month ago. But demand still vastly exceeds supply, meaning many of those eligible to be vaccinated have to hustle to make it happen.

For those who are elderly or have pre-existing conditions, it can be a matter of life or death, given about 1700 people a day are still dying of COVID-19.

Some Americans – even those not especially vulnerable to the virus – have gone to extraordinary lengths to get vaccinated. In Florida two women aged under 45 were caught “dressing up as grannies” to convince health workers they were aged over 65, and therefore eligible for the vaccine.

“This is the hottest commodity that is out there right now, so we have to be very careful,” said Raul Pino, the director of the health department at Orange County, where the incident occurred.

Officials have also had to crack down on tens of thousands of “vaccine tourists” travelling across state borders to receive vaccines they may ineligible for, or find more difficult to procure, in their home states.

Those trying to play by the rules have often battled glitchy websites that make it frustratingly slow, if not impossible, to secure an appointment.

When Washington DC released 4350 new appointments in late February, they were snapped up in half an hour – but only after many hopeful residents were blocked from accessing the system by repeated error messages. Disappointed residents flooded social media with complaints about the booking system.

“I thought I could put my skills [getting Bruce Springsteen tickets] to work to help others get vaccine appointments.”

In order to simplify the appointment process, tech-literate Americans have stepped into the breach left by government with their own solutions.

Huge Ma, a 31-year old software developer from New York, created TurboVax, a vaccine appointment-finding bot, after having to refresh his internet browser all day to find an appointment for his mother. The bot is modelled on TurboTax, a popular software program that allows people to fill out their tax returns without using an accountant.

Similar sites are also operating in California and other states.

When Lisa Meyers, who lives in Florida, used a Facebook group to help find a vaccine appointment for her parents she was surprised to find that a similar group didn’t exist in her native New York. So she founded the “New York COVID-19 Vaccination Info”, which has quickly grown to more than 10,000 members.

As well as providing a forum for crowd-sourced information about the vaccination process, Meyers and a team of 30 volunteers have helped secure over 4000 vaccine slots for New Yorkers. Just before speaking to The Sydney Morning Herald and The Age, Meyers had secured an appointment for a September 11 first responder with lung damage. 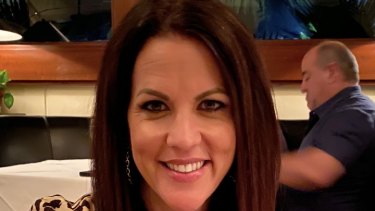 Lisa Myers and her team of volunteers have secured vaccine appointments for 4000 New Yorkers.

“This is a full-time unpaid job,” she says. “We’re in front of the computer all day long.

“It’s a little bit of an addiction because if someone’s grandma needs an appointment how can you not help them get it?”

She says there are “are all types of little tricks” to jagging a spot – ranging from the technical (setting up auto-refresh on your internet browser) to the informational (knowing that certain pharmacies release new appointments early in the morning).

While Meyers and her fellow volunteers try to secure people appointments near their homes, they aren’t allowed to preference one brand of vaccine over the other. “As far as I’m concerned, just be happy that you’re getting it,” she says.

As gratifying as it’s been to help people find appointments, she’s looking forward to the day when the vaccine supply is more plentiful and people have learned to master the system themselves.