We’ve had the mother (and daughter!) of spine ops: Scoliosis sufferer has crippling condition fixed after being inspired by her daughter who went under the knife for exactly the same reason

Tanya Kater and her daughter Olivia, eight, have gone under the knife for the same spinal operation

For nearly 20 years, Tanya Kater lived with a debilitating spine condition that left her in agony.

She was told she could not have surgery and would most likely end up paralysed.

But now she is free from the agony of scoliosis following a life-changing operation.

And it’s all down to her eight-year-old daughter Olivia, who went under the knife for exactly the same reason.

Miss Kater, 32, was diagnosed with scoliosis, a curved spine, at the age of 13. She also had kyphosis, a condition that caused her to hunch forward, and was forced to wear a back brace as a teenager.

Aged 20, she was told by a doctor they could not operate because the risks were too high. ‘I was heartbroken’, she said.

The mother-of-four prayed none of her children would inherit the condition but when Olivia was five, Miss Kater, a hospital administrator from Southampton, noticed her back had started to curve.

She took her to see Evan Davies, a consultant spinal surgeon at University Hospital Southampton NHS Foundation Trust. He told her: ‘Let’s get your daughter fixed, then we’ll fix you.’ Miss Kater said: ‘It was the first time I felt positive.’

Olivia was given a back brace to wear but her condition worsened and in March 2018, aged seven, she had titanium rods and screws inserted into her spine that can extend and move as she grows.

The operation was a success and within three weeks Olivia went back to school. 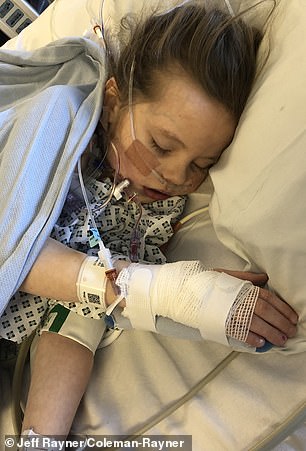 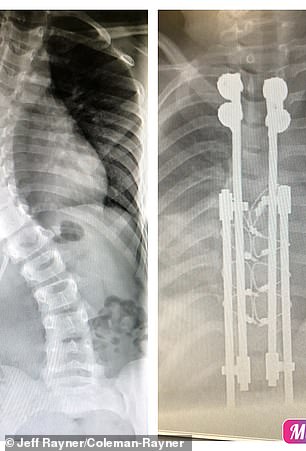 2018: Olivia in hospital and X-rays showing her operation after her spine started to curve. She had titanium rods and screws inserted into her spine that can extend and move as she grows

Mr Davies then offered to operate on Miss Kater but warned her that there was a real risk of paralysis.

‘It was a big decision,’ Miss Kater said. ‘I had young children to look after. Olivia was constantly telling me to do it. She was doing so well in her recovery and really spurred me on.’

She had the surgery in February this year and everything went according to plan. ‘I remember waking up and seeing the doctor with a big smile on his face,’ said Miss Kater. ‘My heart raced when I realised I could still wiggle my feet.’ 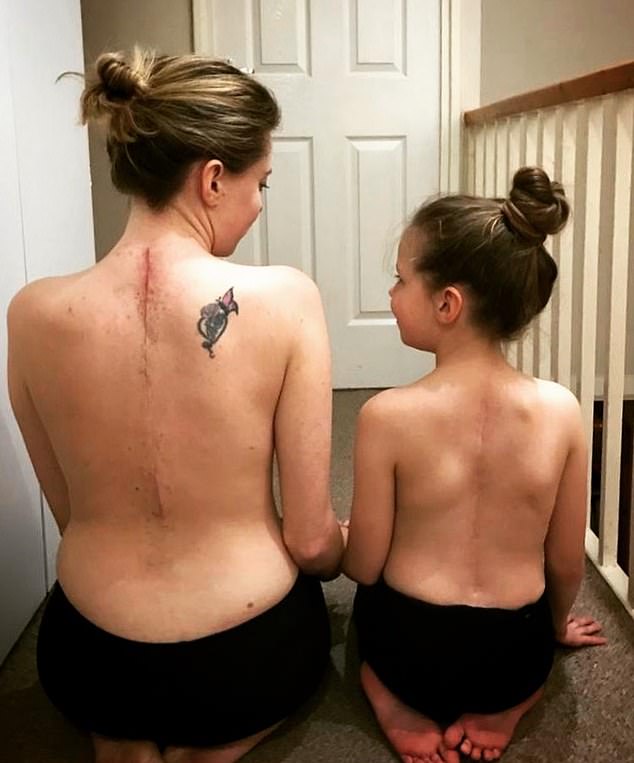 The scars from their operations on their spines are still visible. Tanya’s recovery has gone so well that she is going back to work on Monday

Her recovery has gone so well that she is going back to work on Monday.

Princess Eugenie, 29, had titanium rods inserted for scoliosis when she was 12. The scar from her operation was visible when she married last year.

Miss Kater said: ‘I can’t put into words how proud I am of Olivia. We now have matching scars down our backs and wear them with pride. She was my inspiration.’