HONG KONG (Reuters) – Hundreds of thousands of people clogged the streets in central Hong Kong on Sunday dressed in black to demand the city’s leader step down, a day after she suspended an extradition bill in a dramatic retreat following the most violent protests in decades.

The massive rally saw some protesters carry white carnation flowers, while others held banners saying, “Do not shoot, we are HongKonger,” as they sought to avoid a repeat of the violence that rocked the financial center on Wednesday when police fired rubber bullets and tear gas.

The protesters, including young families as well as the elderly, formed a sea of black along roads, walkways and train stations across Hong Kong’s financial center to vent their frustration and anger at Hong Kong leader Carrie Lam.

Loud cheers rang out when activists called through loud hailers for Lam to step down and “step down” echoed through the streets. Protesters also chanted “pursue the black police”, angry at what they say was an overreaction by police that left more than 70 people injured in Wednesday’s violent protest.

Beijing-backed Lam on Saturday indefinitely delayed the extradition bill that could send people to mainland China to face trial, expressing “deep sorrow and regret” although she stopped short of apologizing.

The about-face was one of the most significant political turnarounds by the Hong Kong government since Britain returned the territory to China in 1997, and it threw into question Lam’s ability to continue to lead the city.

“Carrie Lam refused to apologize yesterday. It’s unacceptable,” said 16-year-old Catherine Cheung. “She’s a terrible leader who is full of lies … I think she’s only delaying the bill now to trick us into calming down.”

Her classmate, Cindy Yip, said: “That’s why we’re still demanding the bill be scrapped. We don’t trust her anymore. She has to quit.”

Activist investor David Webb, in a newsletter on Sunday, said if Lam was a stock he would recommend shorting her with a target price of zero.

“Call it the Carrie trade. She has irrevocably lost the public’s trust,” Webb said.

“Her minders in Beijing, while expressing public support for now, have clearly lined her up for the chop by distancing themselves from the proposal in recent days.”

The protests have plunged Hong Kong into political crisis, just as months of pro-democracy “Occupy” demonstrations did in 2014, heaping pressure on Lam’s administration and her official backers in Beijing.

The turmoil comes at a difficult time for Beijing, which is already grappling with an escalating U.S. trade war, a faltering economy and tensions in the South China Sea.

Chinese censors have been working hard to erase or block news of the Hong Kong protests, wary that any large public rallies could inspire protests in the mainland. 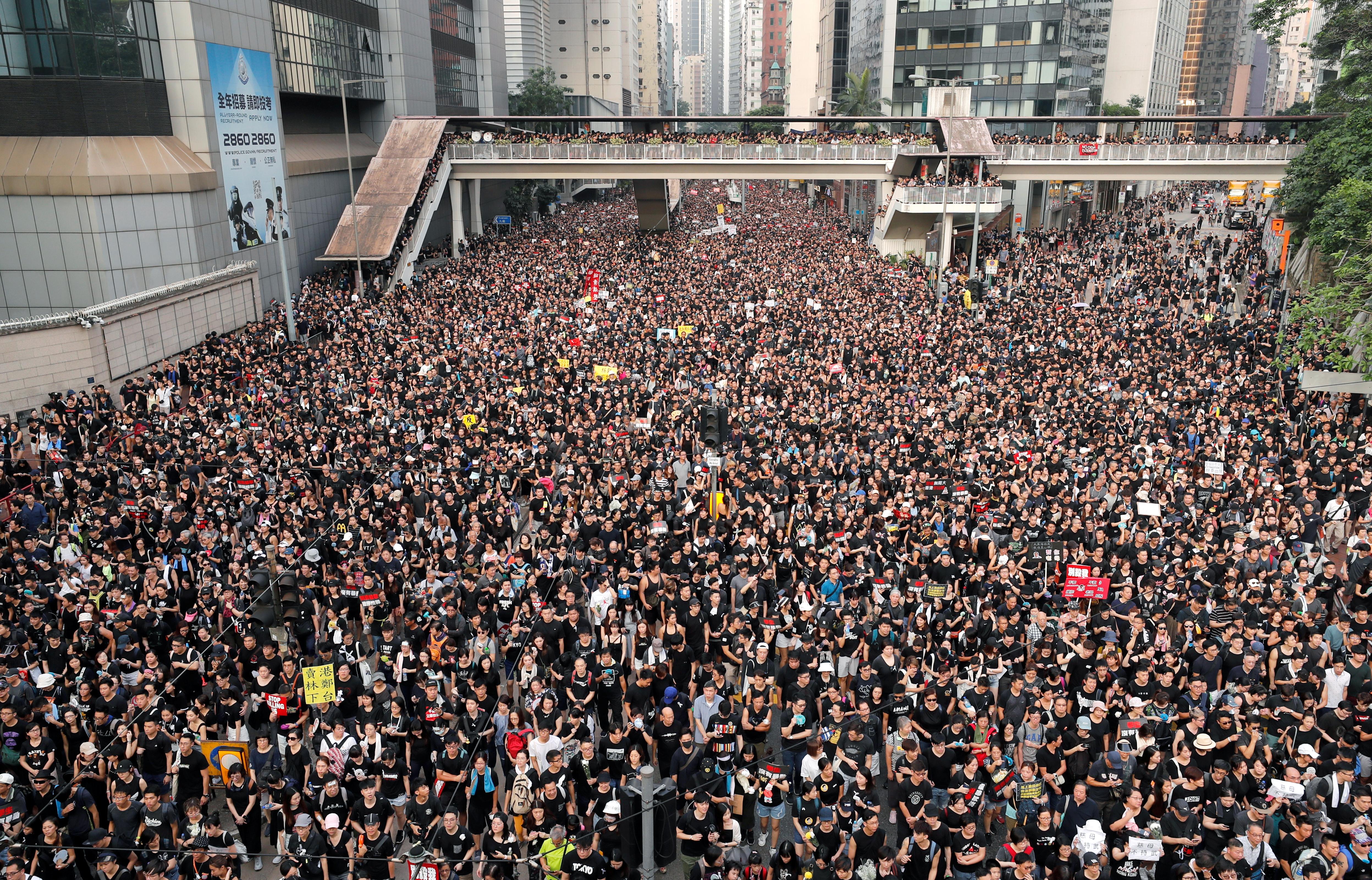 The violent clashes near the heart of the financial center on Wednesday grabbed global headlines and forced some shops and banks, including HSBC, to shut branches.

Activists on Sunday pasted hundreds of fliers and notes to a wall near the protest site, with some reading, “Stop shooting innocent people”, and “Use your brain, violence is insane”.

At the start of the march, protesters paused for a minute’s silence to remember an activist who died from a fall on Saturday near the site of the recent demonstrations.

In the self-ruled island of Taiwan, which China claims as its own, about 5,000 people rallied outside the parliament building in Taipei with banners saying, “No China extradition law” and “Taiwan supports Hong Kong.”

Some of the protesters in Hong Kong also waved Taiwan flags.

The city’s independent legal system was guaranteed under laws governing Hong Kong’s return from British to Chinese rule 22 years ago, and is seen by business and diplomatic communities as its strong remaining asset amid encroachments from Beijing.

Hong Kong has been governed under a “one country, two systems” formula since its return to Beijing, allowing freedoms not enjoyed on mainland China but not a fully democratic vote.

Many accuse Beijing of extensive meddling since then, including obstruction of democratic reforms, interference with elections and of being behind the disappearance of five Hong Kong-based booksellers, starting in 2015, who specialized in works critical of Chinese leaders.

Some opponents of the extradition bill said a suspension was not enough and want it scrapped and Lam to go.

“If she refuses to scrap this controversial bill altogether, it would mean we wouldn’t retreat. She stays on, we stay on,” said pro-democracy lawmaker Claudia Mo.

Asked repeatedly on Saturday if she would step down, Lam avoided answering directly and appealed to the public to “give us another chance.” Lam said she had been a civil servant for decades and still had work she wanted to do.

Lam’s reversal was hailed by business groups including the American Chamber of Commerce, which had spoken out strongly against the bill, and overseas governments.

The UK Foreign Secretary Jeremy Hunt said on Twitter: “Well done HK Government for heeding concerns of the brave citizens who have stood up for their human rights”.

“Certain people in Hong Kong have been relying on foreigners or relying on young people to build themselves up, serving as the pawns and lackeys of foreign anti-China forces,” the ruling People’s Daily said in a commentary.

“This is resolutely opposed by the whole of the Chinese people including the vast majority of Hong Kong compatriots.” 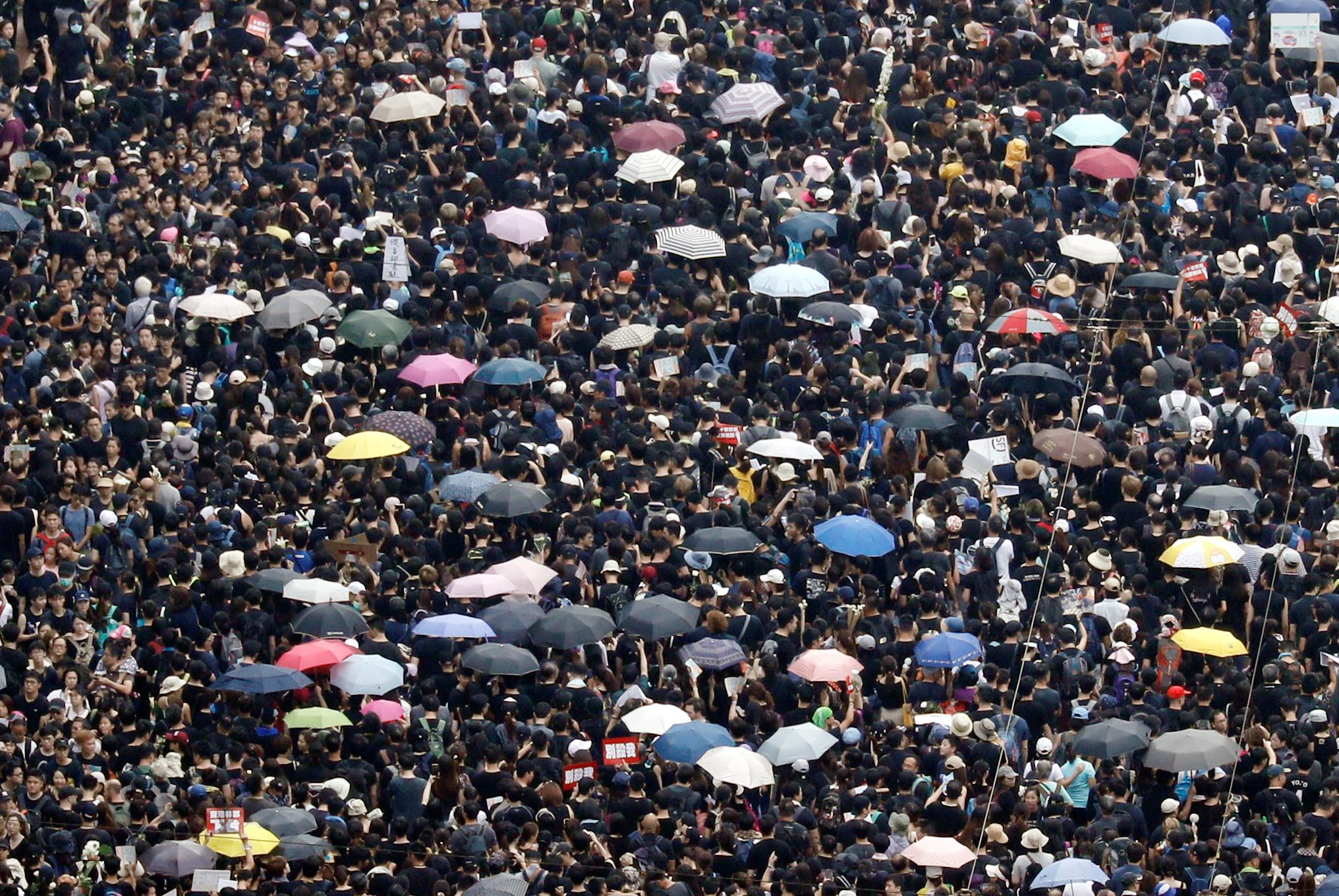 The Hong Kong protests have been the largest in the city since crowds came out against the bloody suppression of pro-democracy demonstrations centered around Beijing’s Tiananmen Square on June 4, 1989.

Lam had said the extradition law was necessary to prevent criminals using Hong Kong as a place to hide and that human rights would be protected by the city’s court which would decide on the extraditions on a case-by-case basis.

Critics, including leading lawyers and rights groups, note China’s justice system is controlled by the Communist Party, and say it is marked by torture and forced confessions, arbitrary detention and poor access to lawyers.