A desperate search is underway for a teenage girl who is believed to have fallen overboard from a luxury cruise liner sailing between Menorca and Mallorca.

The missing passenger, believed to be from America and wearing pink pyjamas, was last seen by her parents at 1am when they went to bed and she stayed out on the balcony.

She was declared missing in the early hours of this morning when guests on board the Norwegian Epic were asked to scour the deck for any signs of her in the sea.

One of them, Rebekah Sanderlin, aged 20, tweeted: ‘I’m on the Norwegian Epic cruise ship in the Mediterranean & we’ve spent all day looking for a passenger who fell overboard last night. People are saying it was an American teenage girl.’ 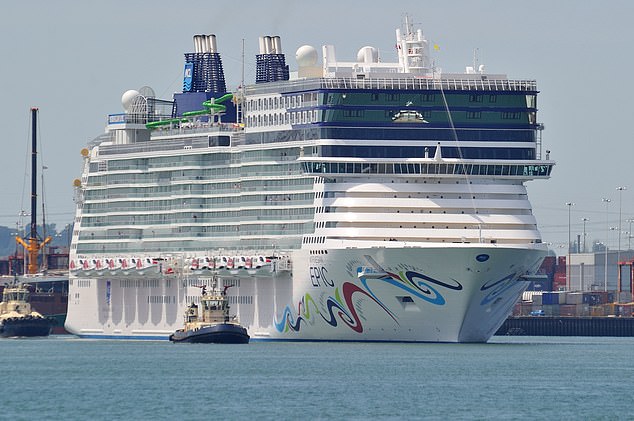 A girl, believed to be in her teens and wearing pink pyjamas is believed to have gone overboard the Norweigan Epic cruise liner (pictured leaving Southampton in 2010) as it sailed from Menorca to Mallorca

Maritime Rescue received an urgent call for help at dawn, reporting that a passenger had apparently fallen overboard about 40 miles north-northwest of Menorca.

A helicopter and several boats were sent out, together with a plane and the cruise liner itself.

At the time of the incident, the Norwegian Epic was heading towards the port of Palma.

The ship was scheduled to arrive in Palma, Mallorca, early Saturday after leaving Cannes, France, on Friday but turned round to conduct the search.

A warning of distress has been activated to all navigators in the area.

Ms Sanderlin told weather.com: ‘At about 8.30M, the captain came on the speaker and said the ship was turning around to go back to look for a passenger who he said they had ‘good evidence’ had gone overboard.

‘After about two hours of sailing, he came on the speaker again and said that we were in the area where she went overboard.’

‘The captain asked every passenger to go to the deck railings and help look for her in the water.

‘He told us she had last been seen in pink pyjamas. He did not tell us her age or any other details.

‘Thousands of passengers stood at the rails looking for hours. We have stayed in that location, not moving, all day.

‘There are some planes flying overhead but I do not see any other ships or boats.’ 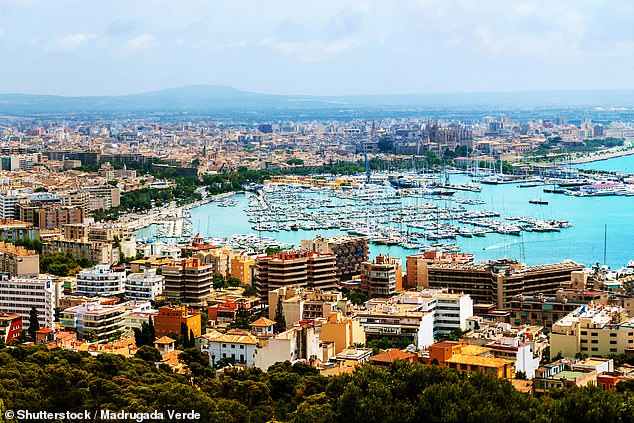 At the time of the incident, the Norwegian Epic was heading towards the port of Palma, Mallorca (pictured)

It is understood the missing girl was with her parents who went to bed at 1am and she stayed on the balcony.

They discovered she was missing the next morning. A statement sent to weather.com from Norwegian Cruise Lines confirmed the passenger was missing.

It read: ‘Early this morning a report was made that an adult female guest went overboard while the ship was sailing from Cannes, France, to Palma de Mallorca, Spain.

‘The authorities were immediately notified and a search and rescue operation ensued.  The search remains underway.

‘Our thoughts and prayers are with the individual’s family during this difficult time.’

The cruise liner is believed to be heading back to Barcelona. Maritime Rescue says the search will continue throughout the night depending on the weather conditions.

The Norwegian Epic can carry 4,100 passengers and was as the third largest cruise ship in the world when built. It first sailed in 2010.