Fox News Flash top headlines for May 29 are here. Check out what’s clicking on Foxnews.com

A commuter ferry traveling from Seattle to Bainbridge Island across Elliott Bay struck a gray whale Tuesday night, according to reports.

The ferry struck the whale about three minutes into the 10-mile trip, and the animal went down into the water, Seattle's Q13 FOX reported.

"Everyone watched in horror," one passenger of the WSF Wenatchee, operated by Washington State Ferries, told the Seattle Times.

The crew, at first, thought the ferry had struck a log, but later saw the whale bleeding near the side of the boat.

“The whale surfaced after being struck and [was] gushing a lot of blood. It surfaced a few more times before sinking,” another passenger told the Times. 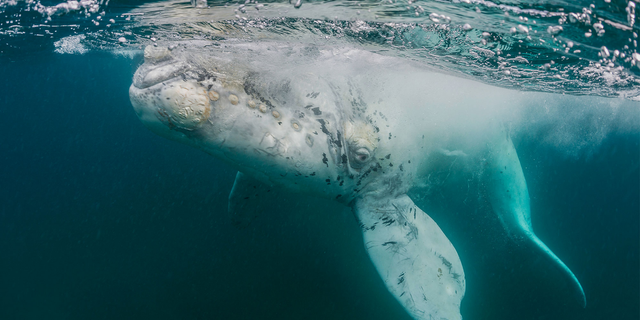 The whale (not pictured here) was struck just minutes into the 35-minute ride.
(Shutterstock)

The whale broke about five feet from the ferry before it was hit, a Washington State Ferries spokesperson said, according to Q13.

The Coast Guard was searching for the injured animal. Witnesses told the Times the whale looked like it could be dying.

No one on the ferry was injured in the incident, reports said.