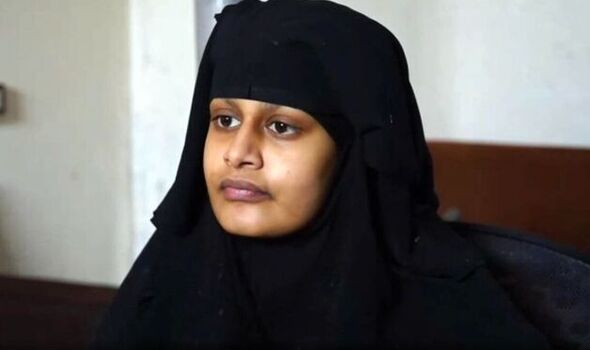 Shamima Begum’s lawyers claim she was a victim of child trafficking and was smuggled to Syria by a Canadian spy where she later married an Islamic State group fighter. At the tribunal for her appeal, lawyers argued that Ms Begum was a victim of human trafficking for sexual exploitation. Dan Squires KC, for Ms Begum, said she was influenced by a “determined and effective ISIS propaganda machine”.

Mr Squires said: “We can use euphemisms such as jihadi bride or marriage but the purpose of bringing these girls across was so that they could have sex with adult men.”

Ms Begum was found nine-months pregnant in a Syrian detention centre in 2019 and her British citizenship was revoked for national security reasons. She has denied any involvement in terror activities and is challenging a Government decision to remove her citizenship.

Mr Squires added: “The evidence is overwhelming that she was recruited, transported, transferred, harboured and received in Syria by ISIS for the purpose of sexual exploitation and marriage to an adult male – and she was, indeed, married to an adult, significantly older than herself, within days of her arrival in Syria, falling pregnant soon after.

“In doing so, she was following a well-known pattern by which ISIS cynically recruited and groomed female children, as young as 14, so that they could be offered as wives to adult men.”

These arguments were dismissed by the Home Office.

Sir Jamie Eadie, KC told the court: “This is a case about national security. This is not a case about trafficking.”

She knew the nature of the organisation she was joining, Sir James added.

Sir James said that Ms Begum “travelled, aligned and stayed in Syria for four years” and that she only left IS-controlled territory for safety reasons “and not because of a genuine disengagement from the group”.

An MI5 witness, known as Witness E told the court it was “inconceivable” that Ms Begum did not know she was joining the Islamic State Group.

The witness added: “In my mind and that of colleagues, it is inconceivable that a 15 year old, an A-star pupil, intelligent, articulate and presumably critical-thinking individual, would not know what ISIL was about.

‘In some respect I do believe she would have known what she was doing and had agency in doing so.”

Ms Begum fled her London her East London home when she was 15 years old with friends Kadiza Sultana and Amira Abase.

Ms Sultana was reportedly killed in a Russian air raid and Ms Abase is missing.