Disturbing video has been unearthed showing angry villagers hacking an elephant to death in Kenya.

In the video, which began circulating on Twitter Monday, a gang of men armed with machetes and axes can be seen slashing the injured animal as it lies on the ground.

The Kenya Wildlife Service (KWS) says the attack happened in June last year in Imeni Forest, near the city of Meru, in central Kenya. But a fresh probe has been launched now that video has come to light. 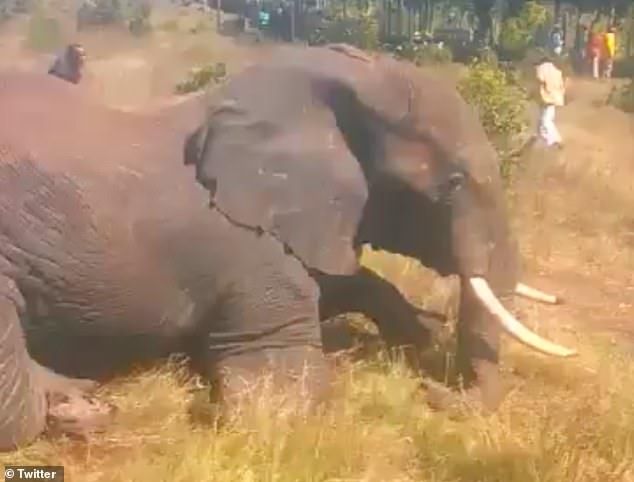 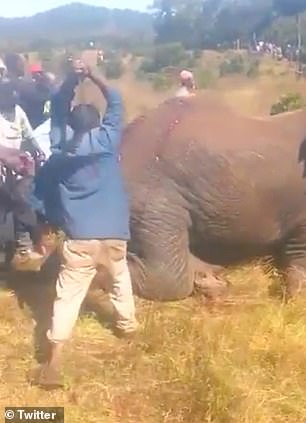 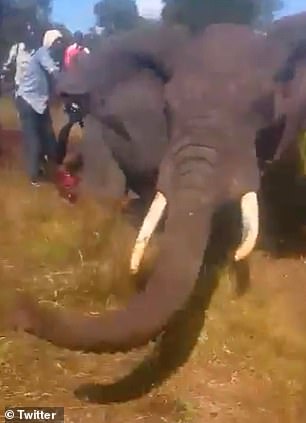 Investigators were called and rushed to the scene, but were travelling from 44 miles away, and by the time they arrived the elephant had already died.

A KWS spokesman said that a fresh investigation has been launched now that video has come to light, as investigators vowed to identify and arrest those responsible.

The agency said the attack began after two elephants broke through an electric fence on June 21 and ‘raided’ a nearby farm looking for food.

Villagers emerged carrying axes, machetes and pangas – a heavy, curved blade similar to a machete – in order to chase the animals away.

During the chase one of the elephants slipped into a deep hole created by the removal of a tree stump and broke its leg.

It was then that the villagers caught up with the animal and butchered it.

Graphic footage shows the wounded animal laying on the ground, with a large bloody wound on its back right leg.

Its back is covered in deep wounds, and there is another bloody scrape on its front leg – though it is not clear if it received this by falling or from being attacked. 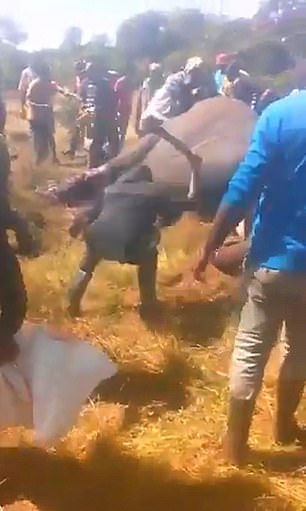 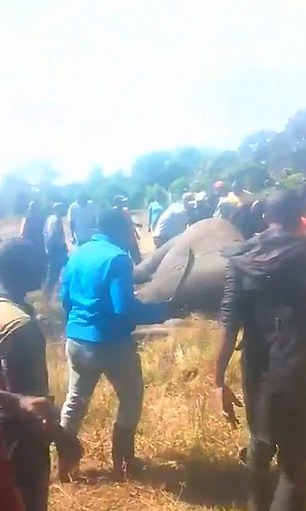 Animal workers said the attack happened in June 2018 before video came to light this week. They have re-launched an investigation into the death, and vowed to arrest those responsible

The elephant can be seen making painful attempts to get to its feet and to fend off the attacking villagers, but there is a little it can do.

A second video then shows the same animal moments later, having crawled a few more feet and now laying down on its side.

Villagers have completely surrounded the creature, and can be seen hacking at its trunk while it writhes on the ground.

Others can be seen gathered around the rear of the animal performing sawing actions with their hands, though it is unclear exactly what they are doing.

The footage has caused outrage among Kenyans after it began circulating on Twitter Monday, with many blaming KWS for not acting sooner.

In response, KWS issued a statement saying: ‘The video clip currently being circulated was not presented at that time, hence follow-up was not conclusive.

‘However, now that KWS is in possession of the video, the culprits will be pursued and arrested with the help of local authorities.’

Elephant hunting has been banned in Kenya since 1973, with poachers facing a potential life sentence and $200,000 fine for killing the animals.

Despite the tough penalties poaching is still rife, with international demand for ivory and corruption among local official a driving factor.

While many African countries have seen population rise in recent years, around 90 per cent of the continent’s animals have been wiped out in the last century.