Shocking moment Oregon cop SLAPS naked wheelchair user, 60, across the face, before dumping him on floor of cell to wet himself after he got chair stuck in grate and threw stones at window to summon help

An Oregon sheriff’s deputy has been caught red handed slapping a disabled man across his face as three other officers pushed his wheelchair into a jail cell.

John Malaer, 63, was left partially naked on the floor of the cell wearing a tiny jail smock that didn’t cover his body by officers at Jackson County Sheriff’s Office.

He claims he had no access to a catheter that he needed to relieve himself and ended up in the cell after his wheelchair got stuck in a sidewalk.

Malaer was forced to throw stones at a nearby store in an attempt to grab the attention of those inside for help on 11 July 2019, when he was 60, but was instead arrested.

The advocate for homeless people with disabilities spent 20 hours in custody on charges of disorderly conduct and harassment before being released and the charges dismissed.

Horrific footage shows the disabled man being slapped by Jackson County Deputy Brian Kolkemo before he is dragged from his wheelchair.

Kolkemo, who earns $75,875 a year, can be seen forcefully hitting the disabled activist and admitted to investigating officers he slapped him again – describing it as a ‘distraction blow’.

He told state police that Malaer was waving his arms and grabbing at deputies as they tried to put jail scrubs on him, adding that he chose to slap him instead of dumping him out of the chair. 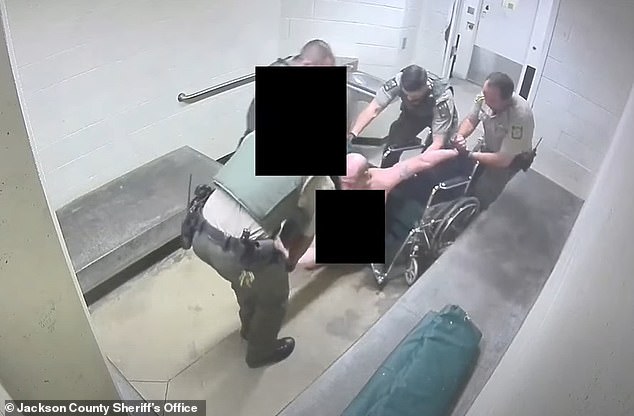 Officers from the department, in Oregon, can be seen dragging Malaer out of his wheelchair as they attempt to get him into the cell 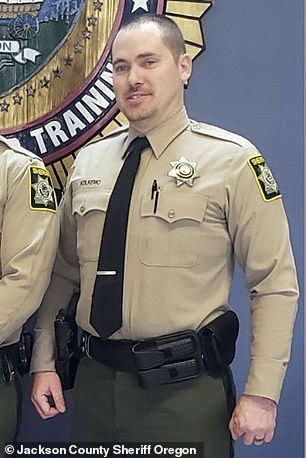 Malaer drags himself onto the mat while shouting for help, with another deputy admitting to slapping him again during an investigation by state police.

He was forced to urinate on the jail cell floor multiple times because he didn’t have his catheter, and only had access to water via the cell’s toilet because he couldn’t reach the sink.

Malaer filed a complaint with Medford police after his release and Oregon State Police investigated the matter.

His lawyer, Alicia LeDuc Montgomery, wrote in a federal civil rights lawsuit: ‘The use of force was unnecessary because Plaintiff was already restrained with handcuffs, paralyzed, and being held down in the wheelchair by other deputies.’

Malaer is suing the deputy who slapped him, Jackson County Sheriff’s Office, other deputies as well as Medford Police.

He claims that they conducted a false and malicious arrest, used excessive force, retaliation, discrimination and violation of his rights under the Americans with Disability Act. 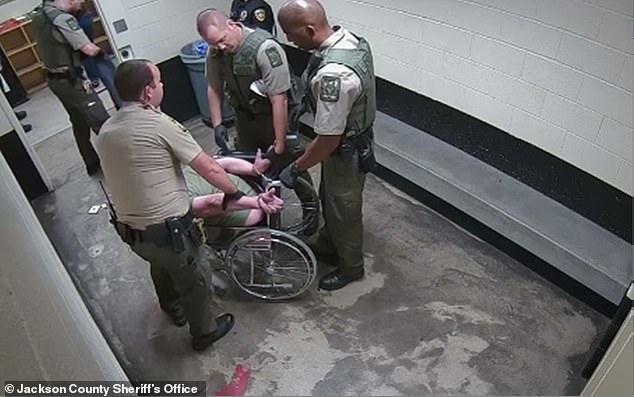 Malaer filed a complaint with Medford police after his release and Oregon State Police investigated the matter. He was handcuffed while in his wheelchair, which had broken down 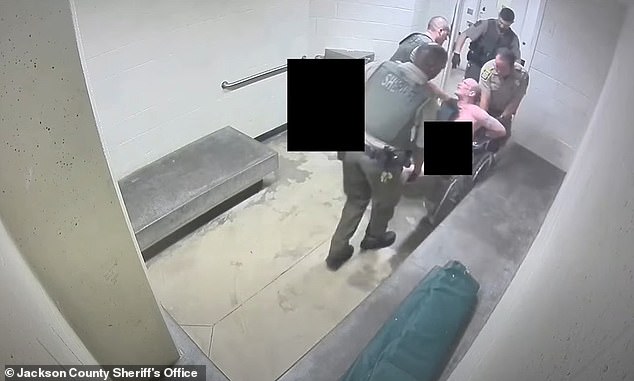 Four deputies overpowered him as he was taken into the prison, with his charges later being dropped

The lawsuit also claims that deputies forced his head between his legs as he was handcuffed in a wheelchair in the jail during processing.

Malaer became stranded after his motorized wheelchair broke down, and was forced to throw rocks at the store to get someone’s attention to help him.

However the store clerk called the police, who found that nothing had been damaged and no one was injured.

Malaer managed to get free after passers-by helped, and he attempted to get onto to bus before Medford Officer Omar Esqueda told him to get on.

He then yelled at the officer, who replied ‘you’re being an a*****e, go away’, before taunting him saying ‘you think just because you’re in a wheelchair you can’t go to jail.’

The officer then allegedly made comments to bystanders about Malaer having ‘p****d in his wheelchair’ before ‘antagonizing, demanding, insulting and inciting’ him before his arrest.

Officers claim that Malaer was drunk and made threats towards the officers, including putting a bullet in their heads, noting that he wasn’t armed.

Officer Michael Wulff told Malaer: ‘You’re talking a lot of trash for being in a wheelchair’ then added ‘Your mouth’s writing checks your body can’t cash’.

Malaer was then taken to the jail, while an officer went to retrieve a charger for his wheelchair, and officers took huis medical catheter to their property room.

His lawsuit claims that he was repeatedly targeted by officers as a retaliation for his public criticism of law enforcement while on the Jackson County Continuum of Care Board.

It claims he was subjected to ‘cruel and unusual punishment because the sheriff’s deputies didn’t like the words that were coming out of my mouth.’

Malaer says the videos of him in jail show him being ‘mouthy’, adding ‘that’s why I was abused an neglected’.

Sickler claims Malaer was drunk, cursing and ‘making threats’ toward officers and deputies when he arrived at the jail.

In response to the lawsuit the sheriff’s lawyer, Johan Pietila, claimed that Malaer was ‘uncooperative during pat down and refused to remove clothing or answer questions’ while with the custody nurse. 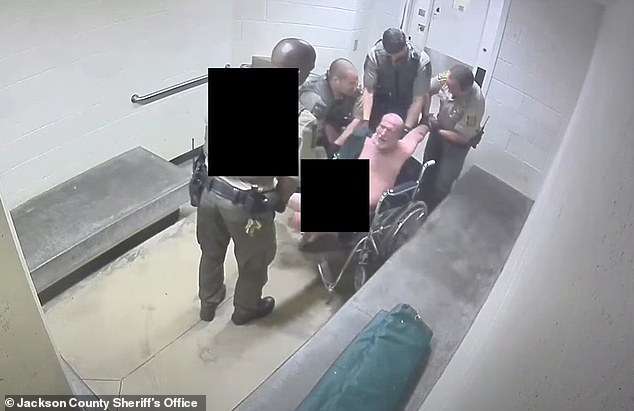 However they acknowledge that Malaer asked to be taken to hospital, a request which was denied, with handwritten remarks on his jail form saying he was paralyzed from the waist down.

The sheriff also claims that Malare had access to a toilet and he was asleep for the first two hours in the cell.

He was allegedly given a jail wheelchair, a cup of water and another safety smock after about five and a half hours in the cell.

Pietilla denies the allegations that Malaer was not given ‘adequate care’ while in the custody of the Sheriff’s office.

Deputy Chad Miller told state police he heard a slap but hoped it was a clap, adding that he heard another jail deputy laugh at the incident.

One deputy interviewed told state police that he had seen other sheriff’s deputies slap prisoners before, while another deputy questioned said it’s not a normal practice.

State police referred their investigation to the Jackson County District Attorney’s Office for consideration of fourth-degree assault and harassment charges against Kolkemo, but prosecutors declined to pursue the case.

It’s unclear if Kolkemo faced any discipline by the sheriff’s office, and prosecutors dropped the criminal charges against Malaer last year.