Perfect for a summer holiday! Sir Cliff Richard drops price of his luxurious Portuguese holiday home and vineyard to £5million as star looks to downsize

Singing legend Sir Cliff Richard has dropped the price of his luxurious holiday home and vineyard in Portugal to £5 million as he seeks to downsize to a property that better meets his current needs.

Sir Cliff had the old Portuguese working farm transformed into a grand entertaining property in the 1990s.

The originally £6.6 million villa in the Algarve has a swimming pool, tennis court and a historic windmill in the grounds.

The property is bordered by Cliff’s vineyard, which produces high quality Syrah, Aragonez and Arinto grapes that supply a winery, Adega do Cantor, and has produced award-winning wines. 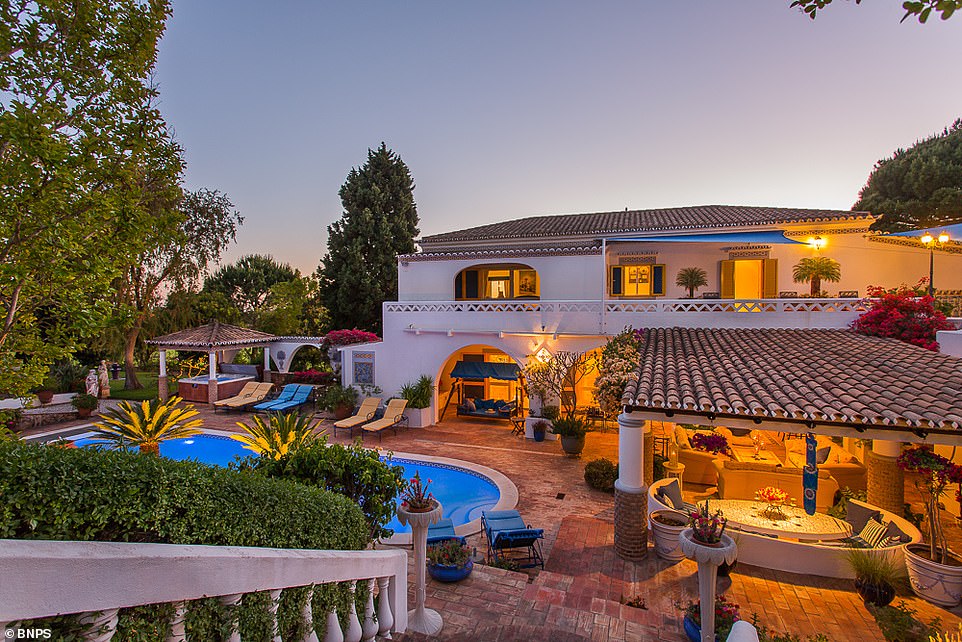 The luxury villa is an estate of its own, with a swimming pool, tennis court and a historic windmill all within the grounds 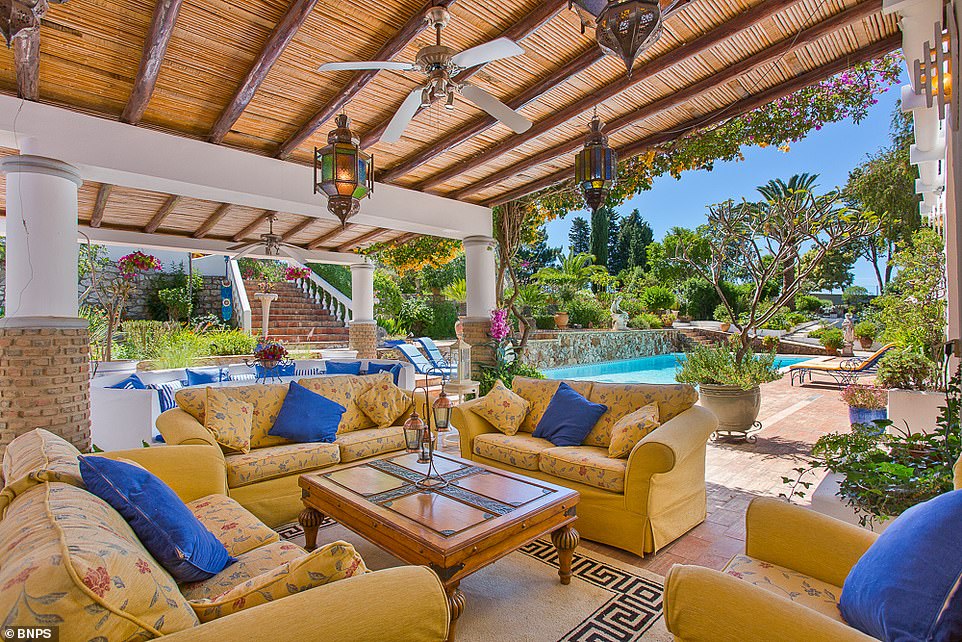 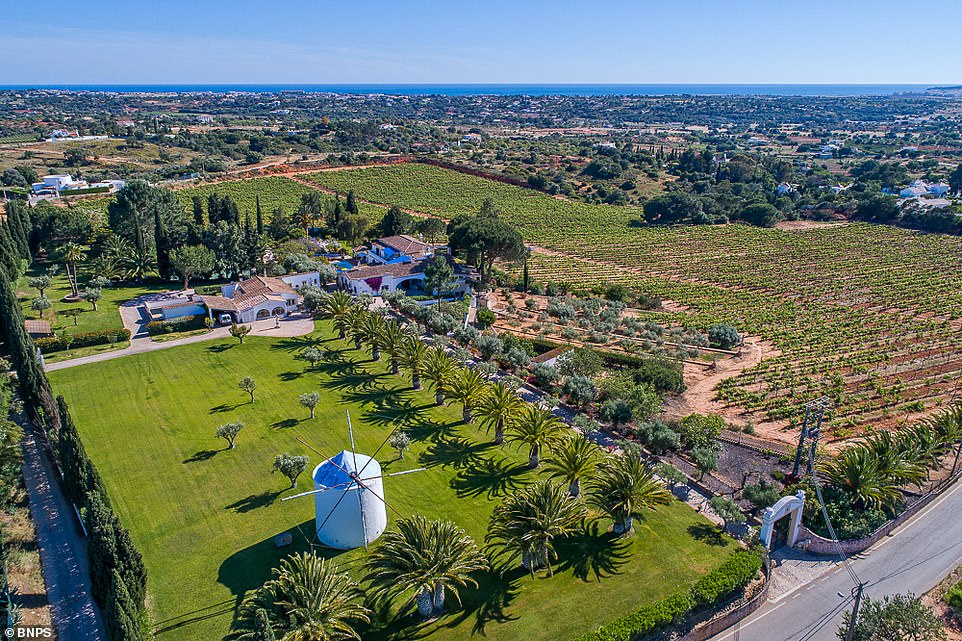 The beautiful house is set within land that includes a historic windmill, private gardens and a huge vineyard used for award-winning wines 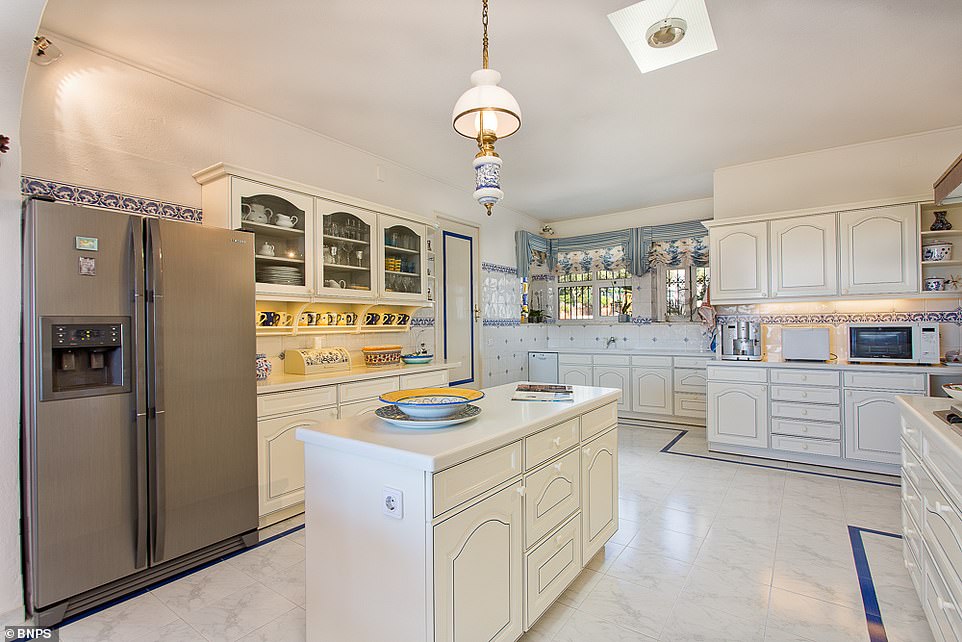 The stunning kitchen certainly has plenty of storage space, and is perfect for getting ready to host big, or small, gatherings 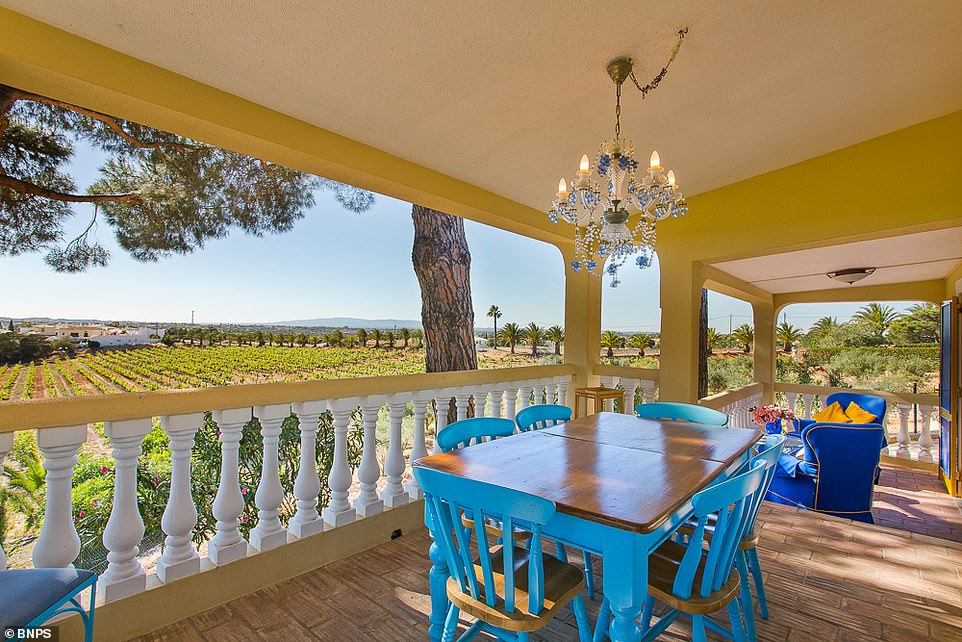 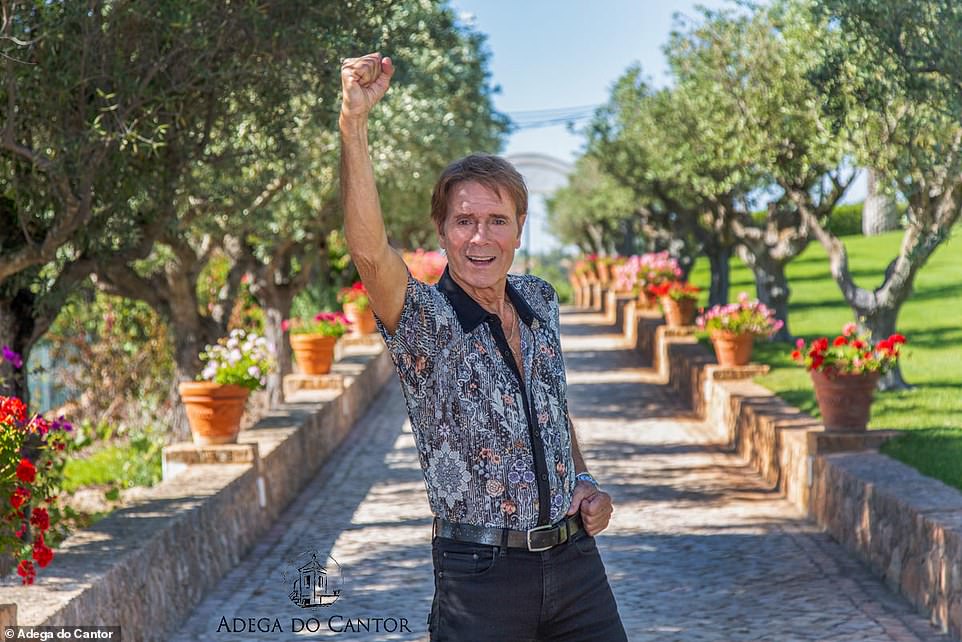 Sir Cliff Richard’s Portuguese vineyard (pictured) has been previously hit by Brexit, with orders to the UK being lost and delayed due to red tape border chaos

The singer, who has had 14 UK No 1 hits and made more than 50 live and studio albums, has been a keen promotor of the wines produced by his grapes. He is popular in the local area, with a road being named after him in nearby Albufeira.

The property forms a mini estate of its own, with the main farmhouse having six bedrooms, each with their own en-suite bathroom, a three-bedroom, two-bathroom cottage and a two-bedroom apartment with two bathrooms.

There is also a gym, an outdoor swimming pool and sun terrace, a hot tub and a tennis court.

Sir Cliff is a famous fan of the game and is frequently seen at Wimbledon, most recently at this summer’s championship where he made a musical splash singing Summer Holiday to celebrate the 100th anniversary of the opening of centre court.

The villa is located between Guia and the coast, a 35-minute drive from Faro airport.

Downstairs there is a giant reception room, currently housing memorabilia from Sir Cliff’s long music career, which has a marble tiled floor, a snooker table, cosy sofas and an open fireplace with a small eating area. 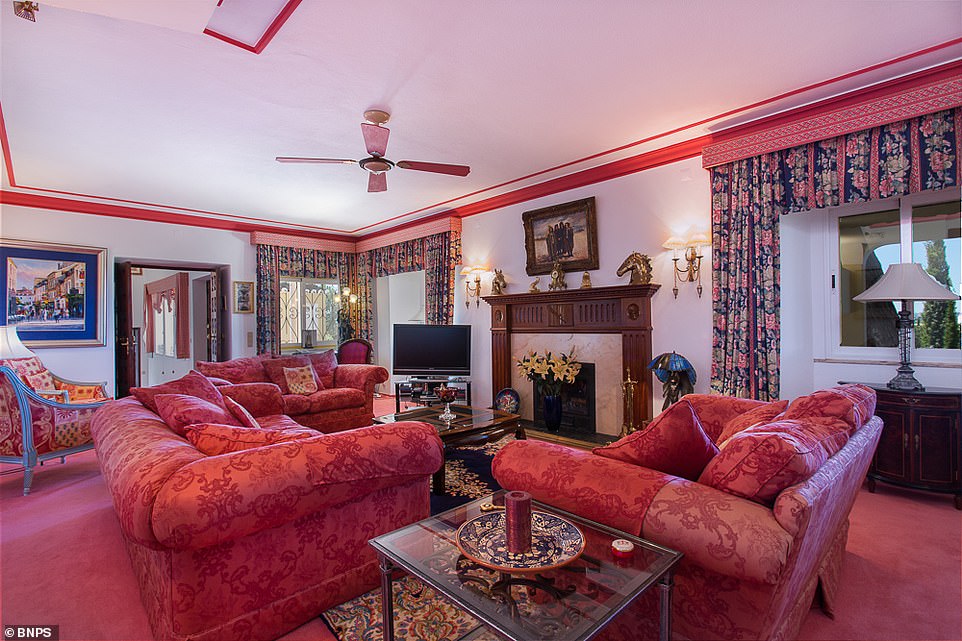 Sir Cliff had the old Portuguese working farm transformed into a grand entertaining property in the 1990s, with lots of luxurious spaces for relaxing and socialising alike 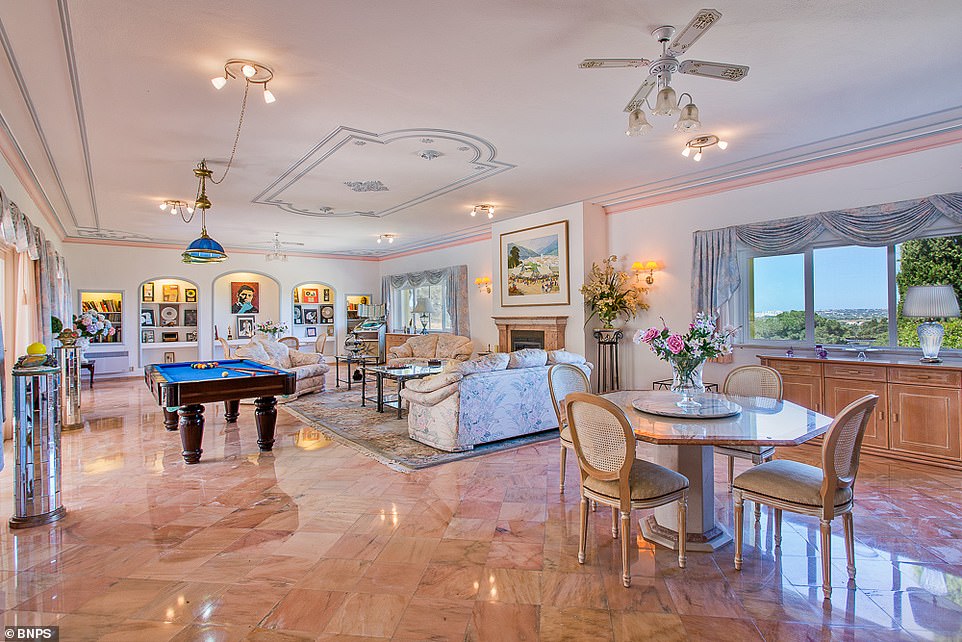 This giant reception room on the ground floor currently hosts memorabilia from the music star’s successful career, as well as a table and snooker table 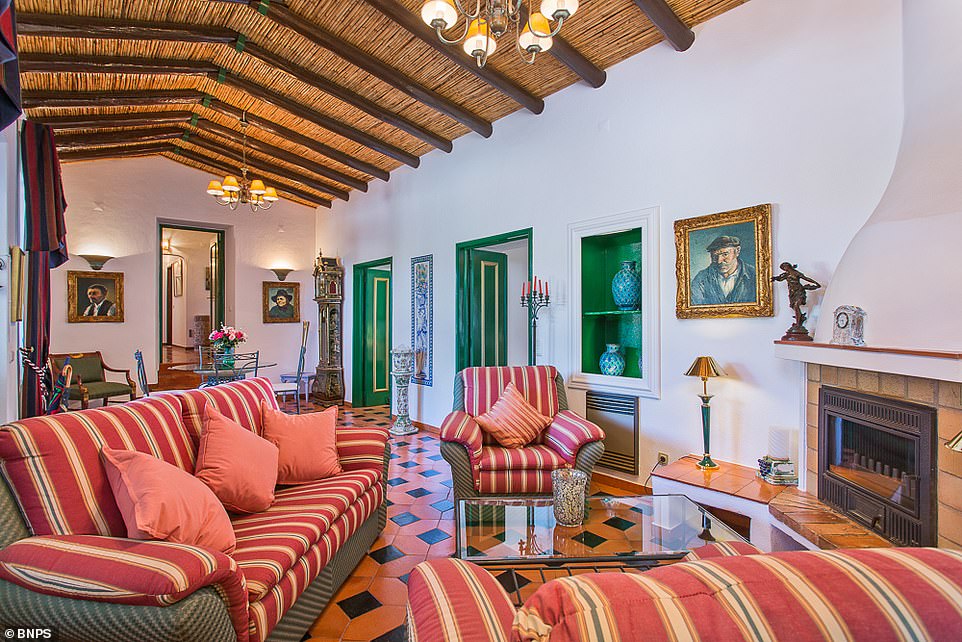 Sir Cliff is a huge fan of art, and each room has ample storage and wall space to display objects of your choosing 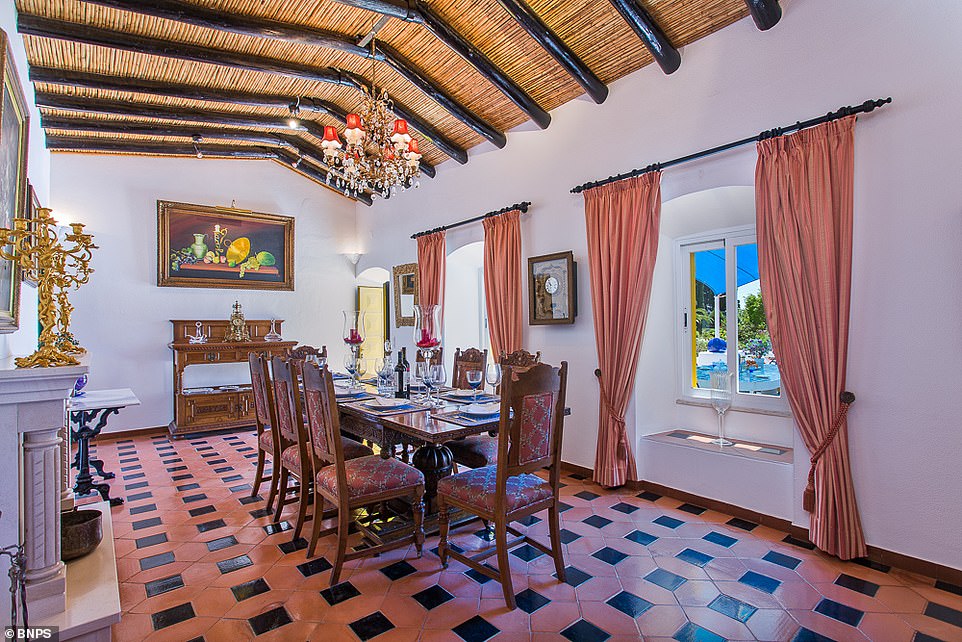 The dining room, like the rest of the villa’s room, has plenty of light and can seat eight with plenty of room going spare for any additional guests 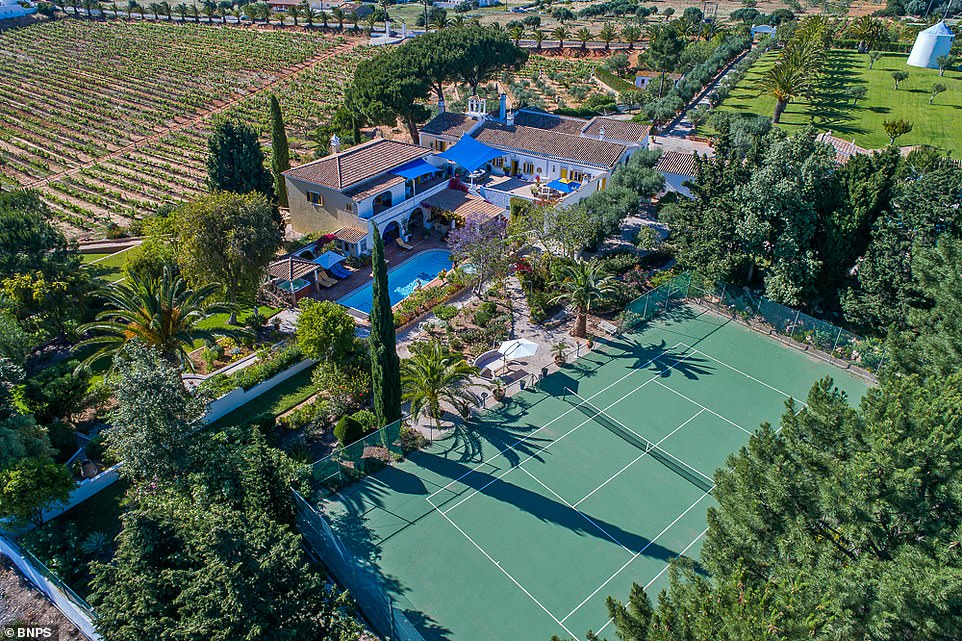 The dining room has an eight-seater table as well as tiled floors, a traditional, beamed roof and an imposing fireplace. The kitchen is in traditional blue and white with an American-style fridge-freezer and pretty ceramics.

Upstairs there are six bedrooms, many with balconies, overlooking the swimming pool and terrace.

Outside, visitors can choose to lounge by the swimming pool, or take shelter from the sun on the sofas under the loggia-style, outdoor sitting room, which has its own ceiling fans and Moroccan-style lamps. There is also an oval outdoor eating area.

The gardens are in a traditional Portuguese style, with large urns, mature palms olive trees and bright flowers.

‘He set out to create a grand Portuguese country home in the traditional style.

‘Before he lived here he used to own a small villa on the cliff-top near Albufeira and has been visiting the Algarve since the late 60s. He still intends to spend time in the Algarve after he has sold, as he still loves it here.

‘The property would appeal to anyone wanting a unique piece of Algarve real estate’ and a real indoor/outdoor lifestyle.’ 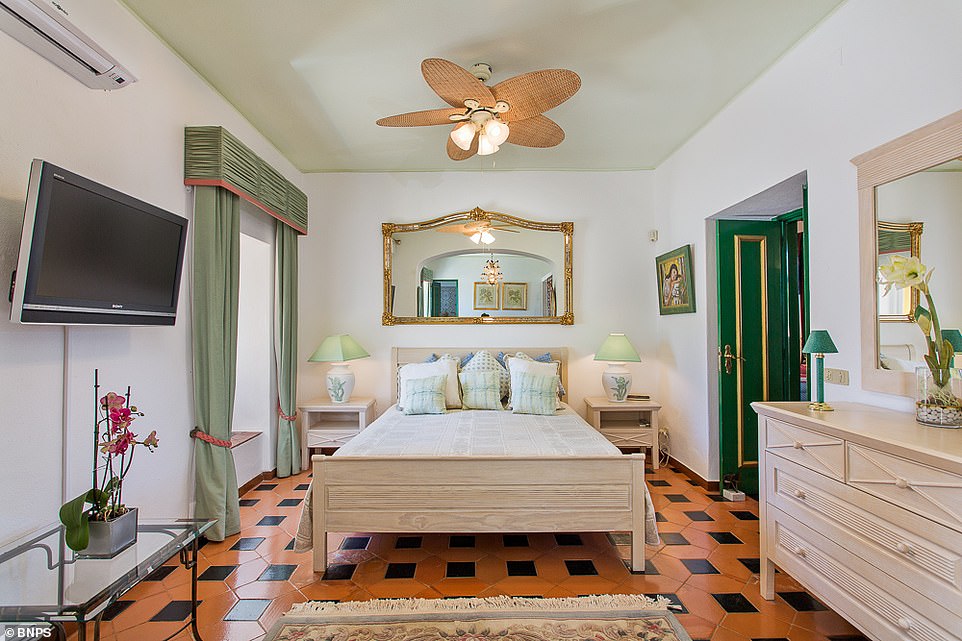 Upstairs there are six bedrooms, many with balconies, overlooking the swimming pool and terrace – and each with its own unique decor 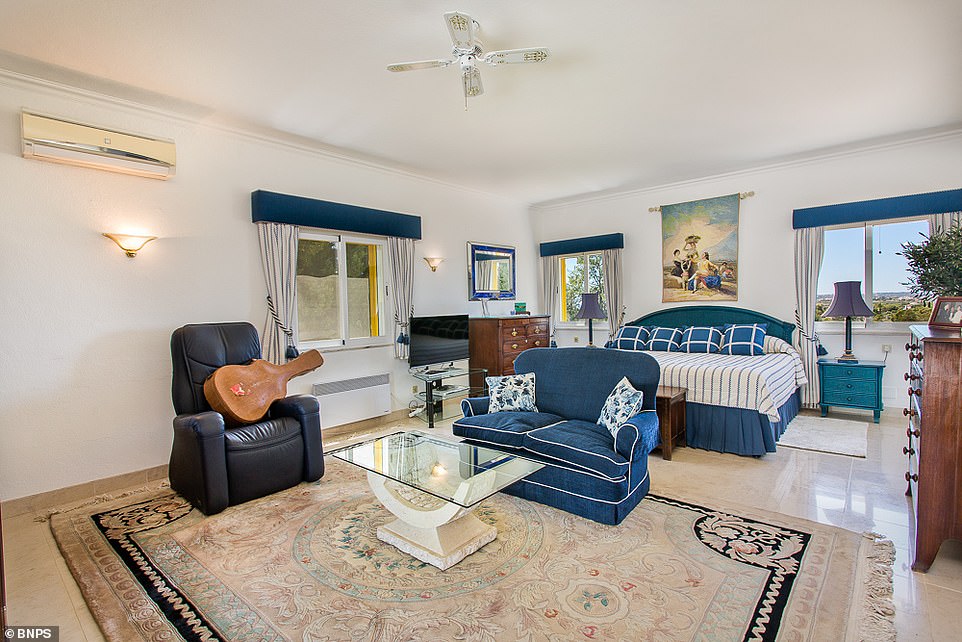 The main farmhouse having six bedrooms, each with their own en-suite bathroom, a three-bedroom, two-bathroom cottage and a two-bedroom apartment with two bathrooms 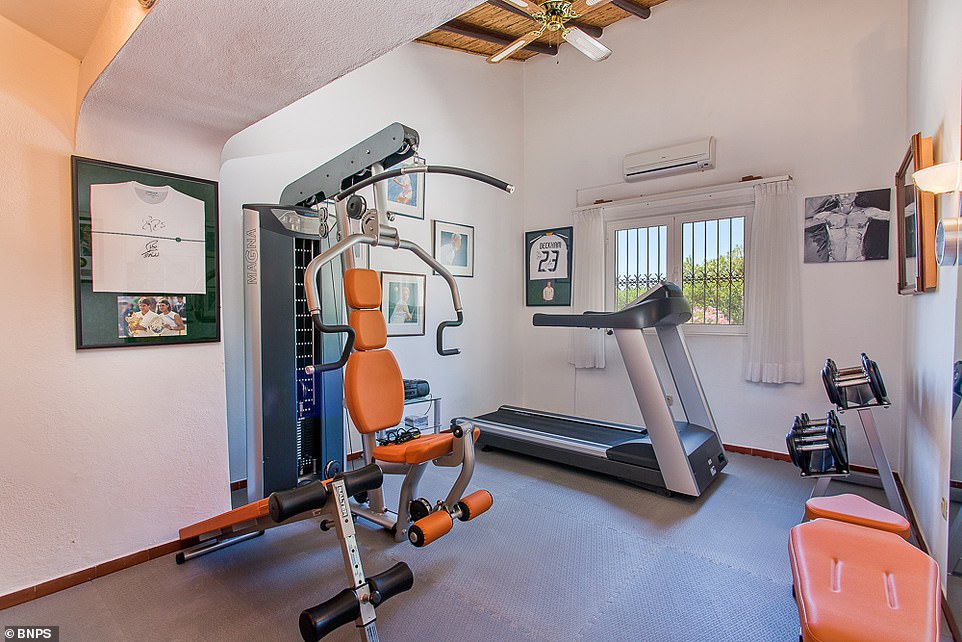 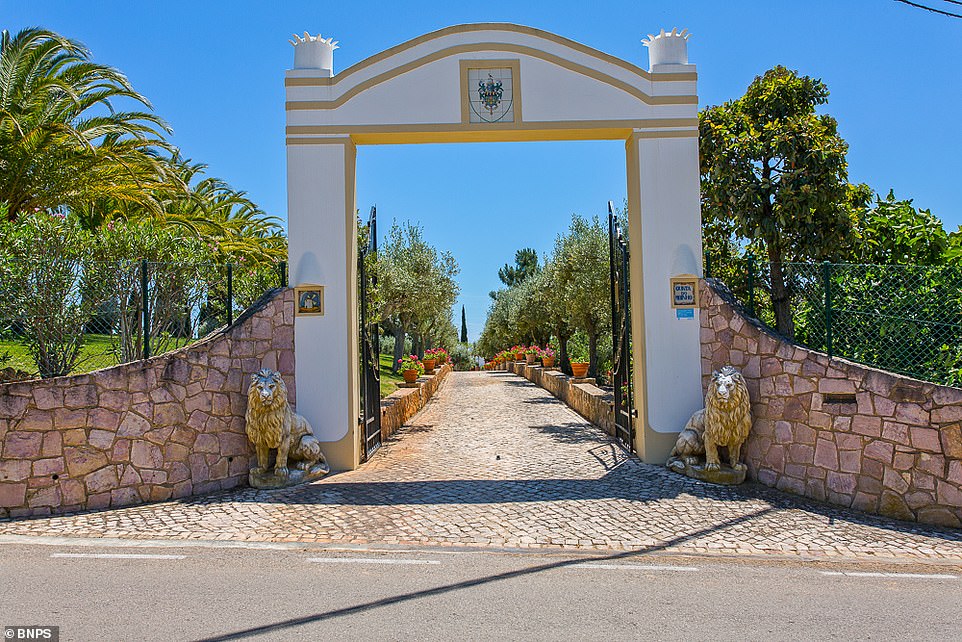 The villa’s entrance is certainly not understated, and visitors drive up a path lined with olive trees in order to reach the three properties on site 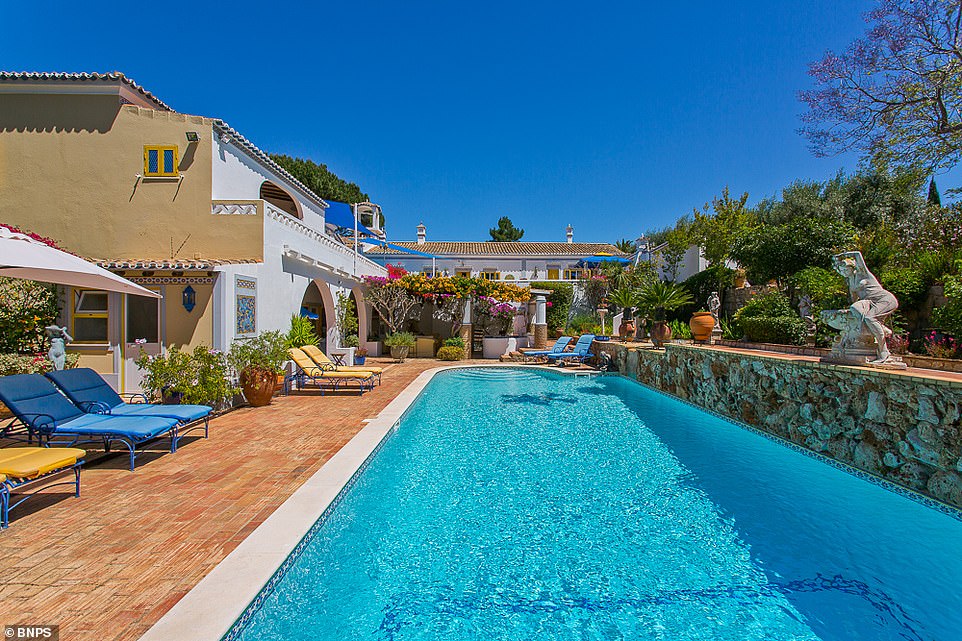 The gardens are in a traditional Portuguese style, with large urns, mature palms olive trees and bright flowers – flanked by a luxurious pool to cool off in the hot summers 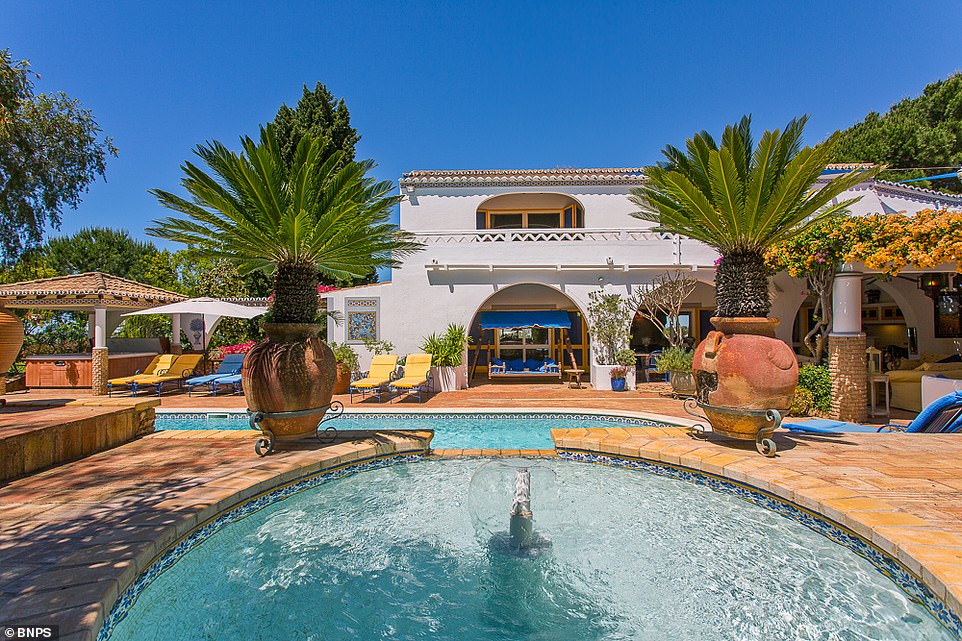 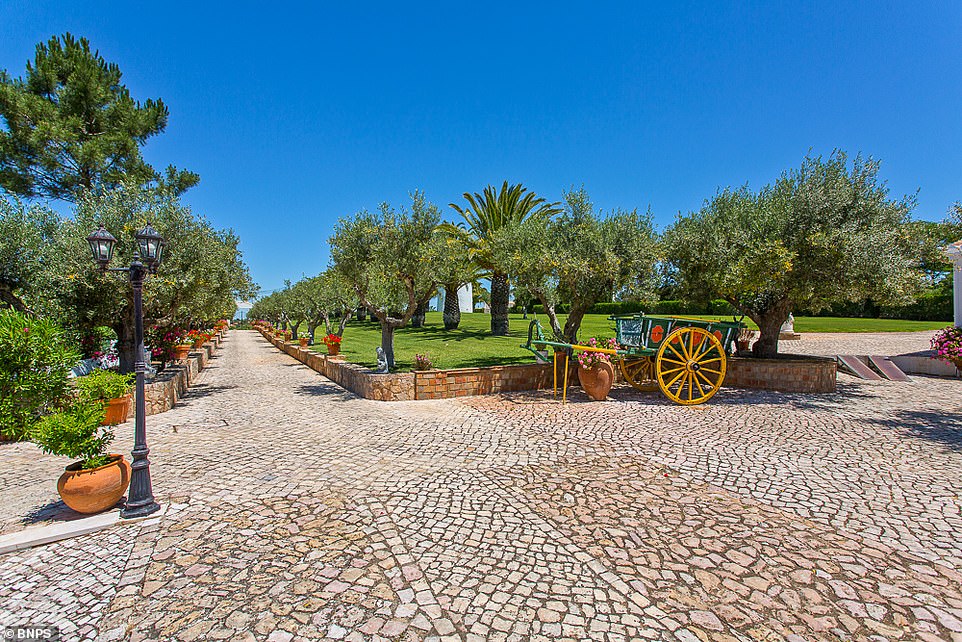 Even the courtyard is in great condition, with paths that take you to the tennis court, pool and vineyard – as well as to the gardens themselves, of course 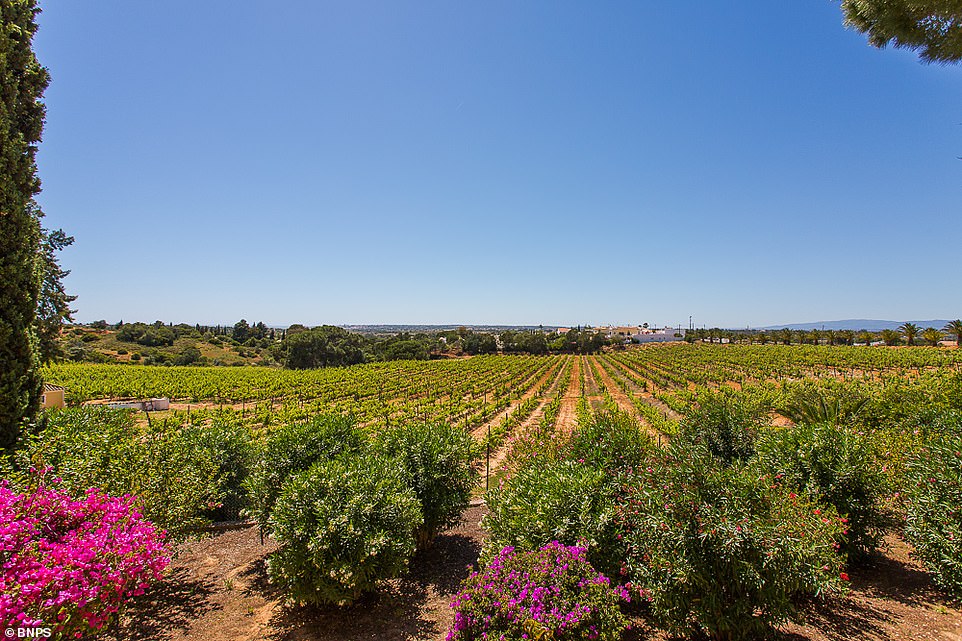 The singer got into winemaking almost by chance – he’d originally set his heart on growing figs. But after meeting Australian winemaker David Baverstock, Sir Cliff agreed to unearth his fig plants and go for wine instead

Sir Cliff first lived in Albufeira in Portugal before moving out during the 1990s and buying his much-loved luxury retreat.

He previously said: ‘I bought the farmhouse because I fell in love with it. I quite like looking at houses, and when I first saw this one it looked so attractive, even in the terrible state it was in. I found myself a dream.’

He got into winemaking almost by chance – he’d set his heart on growing figs. ‘The house came with a farm, which I’d always fancied, and I planted figs. Then I met an Australian winemaker, David Baverstock, and he suggested I plant grapes.

‘He said, “We could be the first to make good wine in the Algarve.”

‘But I’d already planted five acres of figs and the next year they would have fruited for the first time.

‘”Well, you’ve got a simple choice,” he told me. “It’s either a nice bottle of wine or a bottle of syrup of figs!”

‘So we pulled up all the figs.’