The UK’s coronavirus death toll could have been just 10,000 if Boris Johnson had triggered lockdown a week earlier, a former government science chief said today.

Sir David King said modelling expert Neil Ferguson had underestimated the casualties from the delay when he suggested the figures could have been halved.

He accused the government of blundering by trying to pursue a ‘herd immunity’ policy that would have kept the economy going.

The intervention, in an interview with ITV’s Good Morning Britain, came after Professor Ferguson, a key figure on SAGE at the beginning of the outbreak, made his bombshell claim to MPs yesterday.

Mr Johnson imposed the lockdown on March 23 on the back of the Imperial College London scientist’s grim modelling, which predicted 500,000 people could die if the virus was left unchecked.

But Prof Ferguson, dubbed ‘Professor Lockdown’, said that, in hindsight, tens of thousands of lives could have been saved if the lockdown had come a week earlier. 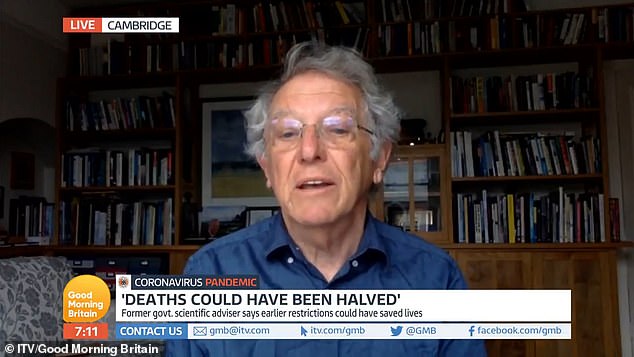 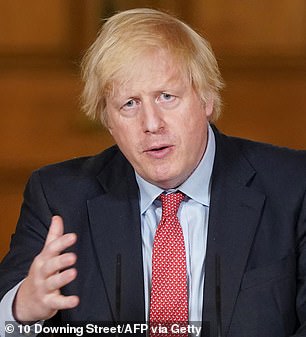 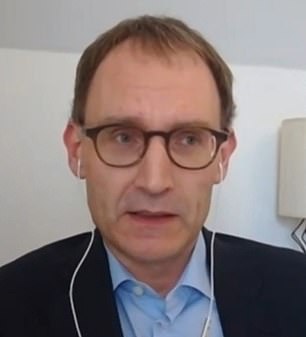 Britain has officially suffered 40,000 fatalities where Covid-19 was the definite cause of death – the most in Europe and only second to the US.

But the true death toll is thought to be above 50,000 according to estimates which factor in suspected cases who did not receive a test.

Sir David, who was the government’s chief scientist from 2000-2007, said today: ‘I believe that we could have emerged at this point with no more than 10,000 deaths by just going into lockdown a week earlier.

‘My second point is that I think the government position was made clear a few times.

‘Once the PM made a speech about how we would ride through lockdown while other countries were going into lockdown, our economy would grow and we would emerge like Superman.

‘What he was referring to was a policy of herd immunity.

‘I do believe that the government was favouring this idea that we should allow the disease to spread but no more than the NHS could manage to cope with the cases.’

At the Downing Street briefing last night, Mr Johnson batted away questions over whether the government had made serious mistakes in the pandemic.

‘At the moment it is simply too early to judge ourselves,’ he said. ‘We simply don’t have the answers to all these questions.’

Asked about what his biggest regret from the crisis is, the PM said: ‘Of course we are going to have to look back on all of this and learn lessons that we can.

‘But, frankly, I think a lot of these questions are still premature.

‘There are lots of things, lots of data, things that we still don’t know, and this epidemic has a long way to go, alas.

‘Not just in this country, but around the world.’

Chief medical officer Professor Christ Whitty was more forthcoming, saying: ‘I think there is a long list, actually, of things that we need to look at very seriously.

‘If I was to choose one, it would probably be looking at how we could … speed up testing very early on in the epidemic.

‘Many of the problems that we have had came because we were unable to actually work out exactly where we were.’ 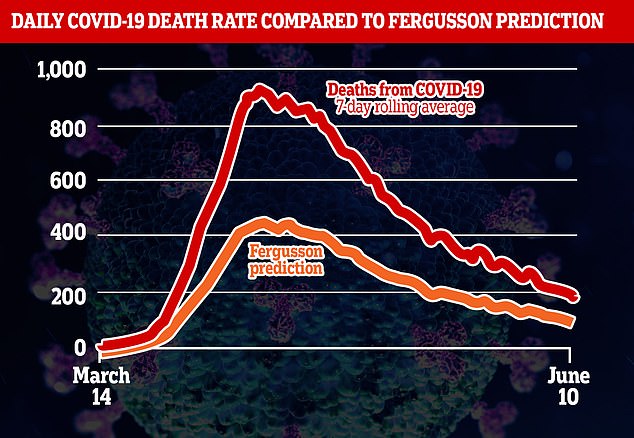 Mr Johnson imposed the lockdown on March 23 on the back of the Imperial College London scientist’s grim modelling, which predicted 500,000 people could die if the virus was left unchecked. But Ferguson, dubbed ‘Professor Lockdown’ conceded this afternoon that, in hindsight, tens of thousands of lives could have been saved if the lockdown had come a week earlier 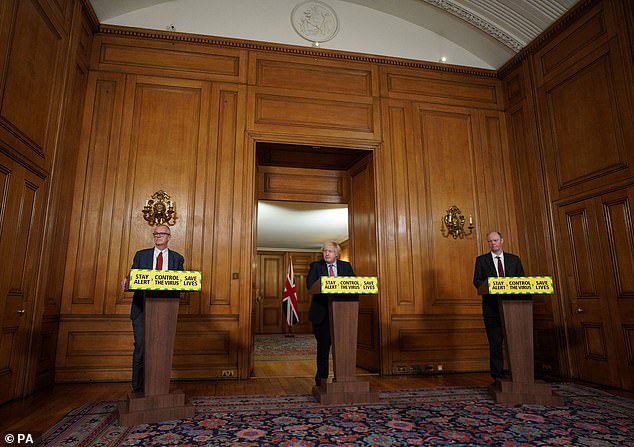 Facing the public and reporters tonight Mr Johnson highlighted the number of questions about past actions, when he wanted to focus on the future. ‘At the moment it is simply too early to judge ourselves,’ he said 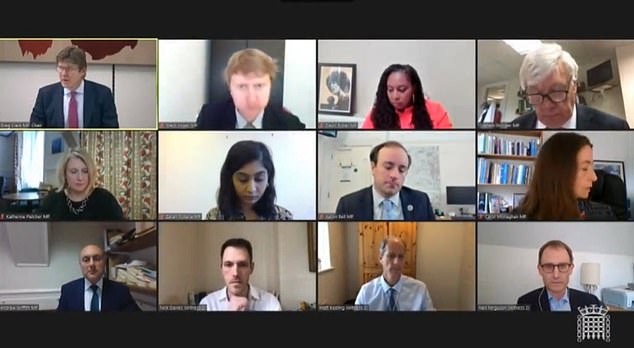 Prof Ferguson was forced to stand aside from SAGE after flouting stay at home rules to have secret trysts with his married mistress.

Appearing before the Science and Technology Committee. he claimed that Britain missed 90 per cent of its coronavirus cases because it was not screening passengers at airports, in a thinly-veiled jab at the Government.

The epidemiologist told MPs: ‘The epidemic was doubling every three to four days before lockdown interventions were introduced.

‘So had we introduced lockdown measures a week earlier, we would have then reduced the final death toll by at least a half,’ Ferguson said.

‘So whilst I think the measures … were warranted … certainly had we introduced them earlier, we would have seen many fewer deaths.’

Professor Ferguson claimed that a lack of screening at airports was the route cause of Britain’s catastrophic outbreak.

He claimed he was sounding the alarm about imported cases coming from Italy and Spain since February.

Professor Ferguson criticised the UK for taking too long to ramp up its testing capacity, which meant swabs were reserved for only very sick Covid patients.

The result was that thousands of infected people were allowed to fly in from Europe and spread the virus through the UK.

‘What we know now is… it’s probably 90 per cent of cases imported to this country were missed.

‘These were really decisions made by the Foreign Office and by the Department of Health and Social Care, not by SAGE.

‘SAGE recommended that when a country had been identified as having active transmission, we should check travellers from those countries.

‘The difficult was we know now, particularly with Spain and Italy, had large epidemics before they even realised. We were just not aware of the scale of transmission in Europe.

‘Had we had the testing capacity then certainly screening everybody with symptoms coming in would’ve given us a much better impression of where infections were coming from.’

Epidemiologist Mark Woolhouse, a professor at the University of Edinburgh and an adviser to Tony Blair’s Government during the foot and mouth outbreak in 2001, told the committee that he feared lockdown would be worse for the nation’s health than coronavirus itself.

He said: ‘I don’t think we will be able to do a full reckoning of the cost of lockdown for some time yet. I have no doubt that lockdown itself will cause a loss of livelihoods, loss of wellbeing and, quite possibly, a loss of lives of itself.

‘But we won’t be able to balance that out for some time. I fear that, to a degree, in the UK… lockdown may be considerably worse than the disease itself.’

It comes after a study in May predicted 30,000 lives would have been saved if the UK locked down a week before March 23.

The claim was made by mathematical sciences expert Dr John Dagpunar, from the University of Southampton.

He predicted how different scenarios could have affected the progress of the outbreak in Britain and suggested that starting the lockdown on March 16 could have limited the number of deaths to 11,200. 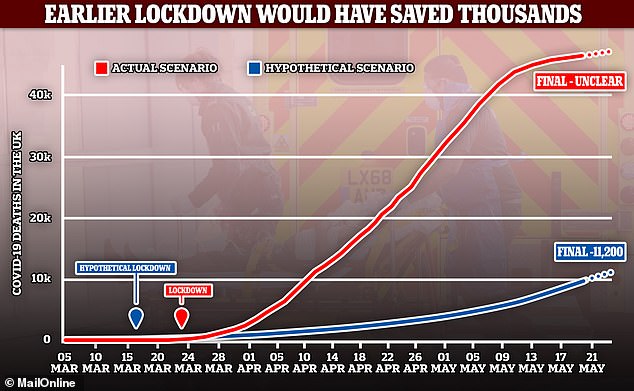 Detailed statistics predict that more than 50,000 people have already died with COVID-19 in the UK, but this study from the University of Southampton suggests that number could have been kept to 11,200 if lockdown was introduced a week earlier

Britain was one of the last countries in Europe to put the rules in place – Germany, Switzerland, Denmark, Belgium, France, Austria, Spain and Italy had done it days or weeks earlier.

Dr Dagpunar said in his paper ‘literally, each day’s delay in starting lockdown can result in thousands of extra deaths… it does pose the question as to why lockdown did not occur earlier?’

Dr Dagpunar’s study considered the number of people infected with the virus, its rate of reproduction, hospital bed and staff capacity, and the proportion of patients who die, among other factors.

He calculated the death rate to be one per cent, and the pre-lockdown reproduction rate (R) to be 3.18, meaning every 10 patients infected a further 32.

The paper estimated that 4.4 per cent of all patients need hospital treatment, 30 per cent of whom will end up in intensive care.

Of the intensive care patients, a hospital stay lasts 16 days on average and half of them go on to die.

Of the other 70 per cent, a hospital stay averages eight days and 11 per cent die.

Running these factors through an algorithm based on the timing of the UK’s outbreak, Dr Dagpunar suggested that the March 23 lockdown could have resulted in a total of around 39,000 deaths. Britain is known to have passed this grim landmark number already.

If lockdown had been started a week earlier, on March 16, the model suggested, there could have been a ‘very large reduction’ in deaths, limiting them to around 11,200.

The virus would have infected four per cent less of the population in this scenario (two per cent compared to six per cent), the study said, and the demand for hospital beds would have been lower.

Dr Dagpunar said: ‘In hindsight [this] clearly illustrates that earlier action was needed and would have saved many lives.’

He said the number of people who would go on to die in the scenarios was ‘extremely sensitive’ to the timing of the lockdown.