Snow radar live coverage will unveil which parts of the UK are set for flurries today. The weather has turned to a blistering chill in some regions, with the traditional new year freeze setting in amid the third lockdown. Much like the new lockdown, vast swathes of England, Scotland and Wales could see a smattering of snow over the day and coming week. 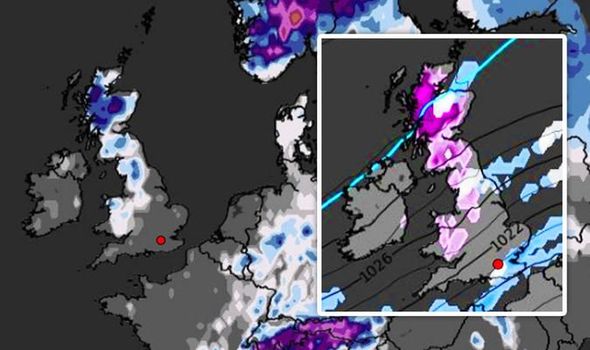 Where is it snowing in the UK right now?

UK snow charts have revealed extensive snow coverage for the country this morning.

According to maps from WXCharts, Scotland has received the most snow today.

According to the maps, snow totals have reached more than 10cm (four inches) in depth.

The deepest snow has settled in central highland regions, however.

There, people have seen up to 25cm (10 inches) in total, reaching nearly one foot.

Snow has fallen south of the border as well, but with less vigour than in Scotland.

WxCharts forecasters have recorded snow depths of one to three inches in the northeast.

Totals there will grow through the day as new flurries descend, up to two inches around areas such as the Lake District.

Further south around the Midlands, snow totals will remain stable, staying at roughly one inch through the day.

But Wales will see slightly heavier snowfall putting it within spitting distance of the northeast.