The three-piece suit of the cocktail set, the sour formula is simple and timeless: spirit, citrus and sweetener. Sometimes, though not always, an egg white is added.

One of the “children of punch,” according to the cocktail writer and historian David Wondrich, the sour is infinitely adaptable, yielding countless variations — whether whiskey sour, daiquiri or a plethora of contemporary mixed drinks.

Add a float of red wine to a whiskey sour and it becomes a New York sour. Shake in an egg white and it’s a Boston sour. Substitute gin for whiskey and call it, suitably, a gin sour. Use a liqueur or cordial and you land firmly in the world of the daisy, a well-loved subcategory of the sour. (Sidecars, margaritas and Last Words are all considered daisies in the drinks world.) And so on.

“It’s like the whole Potato Head method, where you plug in and swap out spirits or sugars or citrus and often egg white,” said Fanny Chu, a New York City-based bartender and drinks stylist. “I think that’s why it’s so fun and easy for everyone: You can keep playing with it and building on it.”

While egg whites aren’t a prerequisite, they are frequently used, imbuing the cocktail with a frothy top and a creamy body. 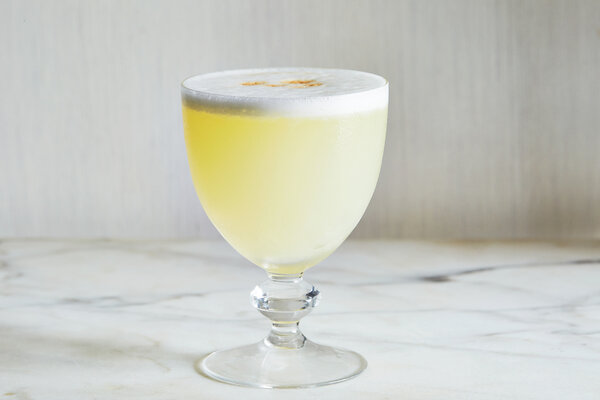 The pisco sour, among the most well known of these cocktails, and others often incorporate egg whites with a dry shake to aerate the drink and help form its signature meringue-like top. (To do so, shake the cocktail’s ingredients vigorously, without ice, for 10 seconds. Add ice and shake again to chill and dilute the drink before straining into a glass.) Ms. Chu often uses a reverse dry shake, building up the egg white foam after the “wet” shake over ice, rather than before.

Whichever method you use, add all the ingredients to your shaker first, then add the egg white just before shaking to help prevent clumping. Also important: Drink quickly. “If you’re drinking an egg white cocktail when it’s colder weather, you have a little more leniency of time,” Ms. Chu said. “If it’s hot outside, I recommend you drink it pretty quick because it does separate and isn’t as appetizing to drink.”

Within their simple, flexible formula, sours seek to balance spirit, sweet and sour. A pour of amaro or another bitter-skewed liqueur tips the scales slightly bitter. A sugared rim, called for in some variations on the sour like the brandy crusta or the Sidecar, tilts the drink a bit more sweet. The sweetly crunchy textural element can be a welcome addition if you like sweet things, but if you don’t, it can quickly shift your drink saccharine.

Even sans sugared rim, sours can still lean sweet. The amaretto sour, a 1970s-era drink, has been long — and often correctly — lampooned as particularly cloying. But learning to make a proper one is a game changer. The key lies in fresh ingredients and a modern mind-set.

Jeffrey Morgenthaler, the bar manager at Clyde Tavern in Portland, Ore., and author of “Drinking Distilled: A User’s Manual,” adds an ounce of overproof bourbon and an egg white to his balanced take. Ms. Chu often adds rum; if she wants to up the nuttiness, she’ll use a little oloroso or amontillado sherry. “What’s not to like? It’s a little nutty, it’s creamy, it’s the perfect nightcap,” she said. “It’s like drinking a dessert.”

Whether a classic or something more nouveau, the sour cocktail knows no bounds, in recipe variation or seasonality. That said, this particular time of the year — with one foot in the tail end of citrus season and the other reaching for longer, slowly but surely warmer days — is especially suited to pouring a sweet-sour, citrus-charged, potentially egg white-topped or citrus-rimmed sour of your choosing.