The record number comes from a peace deal between South Sudan’s warring sides that was agreed nine months ago, ending five years of conflict said to have plunged two million people into near starvation. Despite the emergence of the original two million figure, a famine was never declared. The situation was attributed to food shortages made worse by delayed rainfall and the conflict itself, that killed more than 400,000 people.

The shocking new number was revealed in a report by three UN agencies.

Hsiao-Wei Lee, of the World Food Programme (WFP), said: “Every year, hunger reaches new and unprecedented levels in South Sudan with millions of people unsure where their next meal will come from, particularly at this time of the year when hunger peaks from May to July.”

The Integrated Food Security Phase Classification (IPC) is the body the rates worldwide hunger on a scale of one to five.

The WFP, the Food and Agriculture Organisation (FAO) and the UN children’s fund (UNICEF) said about 1.8million residents in South Sudan were at “emergency” or level four on the hunger scale. 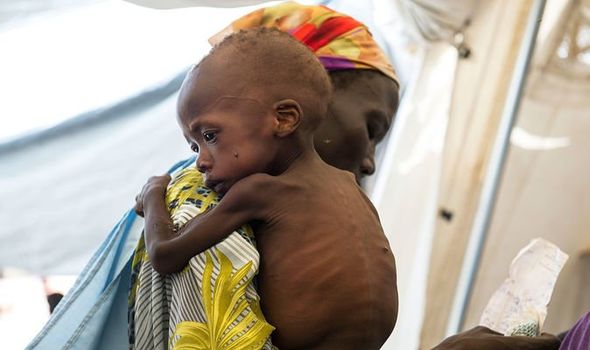 This means there are large gaps between meals, acute malnutrition and excess deaths.

Up to five million people are having to skip meals altogether.

It was estimated that 6.1 million people were facing hunger at the start of 2019.

It now stands at 6.9million, which works out at 61 percent of the population of South Sudan.

Under the IPC system, level five is officially classified as “catastrophe” and when such conditions apply to 20 percent of the population, it is typically closed as a famine.

In 2017 South Sudan declared a “man-made” famine, which stopped the country from meeting the typical requirements for a traditional famine.

According to the report, at that time two million people are dependent on food aid.

The agencies said in a statement that the annual lean season “started early following record low stocks from the poor 2018 harvest and has been further extended by the delayed onset of 2019 seasonal rains”. 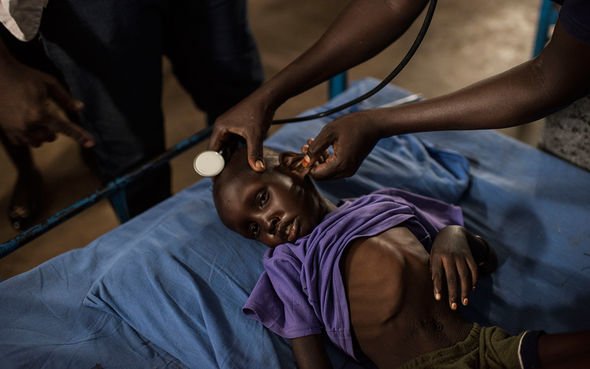 Mohamed Ag Ayoya, UNICEF’s representative in South Sudan, added: “With greater stability in the country, access to those in need has improved, allowing us to treat more than 100,000 children suffering from severe malnutrition in the first five months of the year, with more than 90 percent of those children recovering.

“But malnutrition levels remain critical in many areas and our fear is that the situation could worsen in the coming months.”