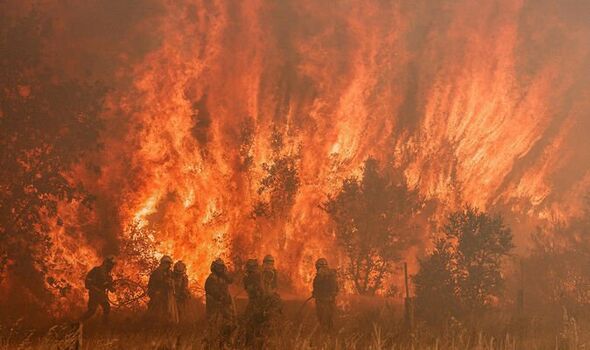 Like many European countries, Spain has sweltered in unseasonably warm weather the past week, recording near 42 degrees Celsius in Zaragoza on Saturday. It has faced similar temperatures since Tuesday when it set a new record for the hottest temperature this early in the summer.

The Iberian peninsula had already faced a dry May, and yesterday’s heatwave has sparked fresh forest infernos.

In the Sierra de la Culebra mountains, outside Zamora, 20,000 hectares of land had been burned and the fire was “still active”, the regional Government said.

It added some 500 firefighters had been dispatched to battle the blaze, but that there had been so far no reported deaths or injuries.

In Catalonia, fire crews were attempting to bring a fire under control in Baldomar, a small town in between Barcelona and Zaragoza, on Saturday.

The fire service stated that they expected it to be a “complicated” operation, owing to the “very high temperatures and strong southerly winds”.

On the outskirts of the village of Caudiel, in Castellon, firefighters struggled to bring tall flames under control as they evacuated residents and pets.

The recent extreme weather has been linked to climate change, being described as evidence of the weather becoming more volatile.

The drier conditions spurred on by global warming also make wildfires harder control, as they spread easier and can burn fiercer.