Pictured: Stowaway clinging to top of lorry on M20 in death-defying James Bond-style stunt after sneaking in Britain on cross-Channel ferry

A stowaway sneaking into Britain was spotted clinging to the roof of a lorry doing 50mph on the motorway.

The death-defying James Bond-style stunt took place during the morning rush hour on the M20 in Kent, and saw the man scan his surroundings as he appeared to check where he was.

Drivers and passengers following the truck from the cross-Channel ferry were left gaping in astonishment at the scene. 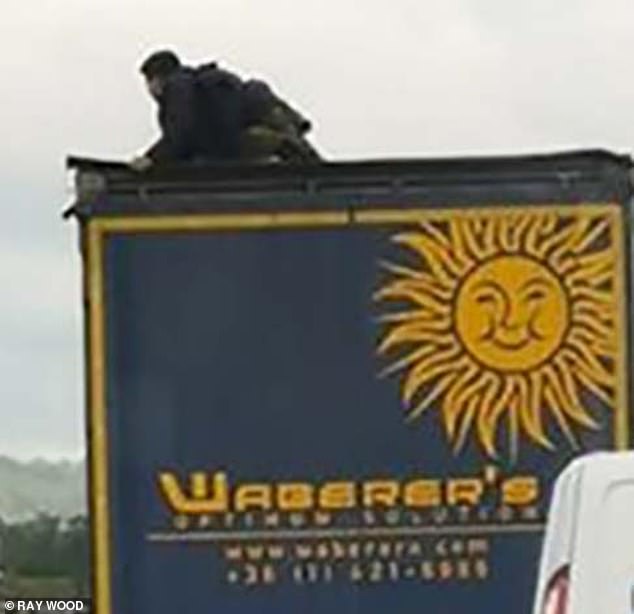 Ray Wood was on the London-bound carriageway near junction 5 at Aylesford when he spotted the stowaway.

He gasped when the man suddenly popped up and sat on the roof of the swaying trailer.

Mr Wood said: ‘To be honest, you don’t see it every day.

‘He was up there about five minutes, then he jumped back in – I assume he was just checking where he was.’

It’s not known if he was alone in the trailer or what he was doing. 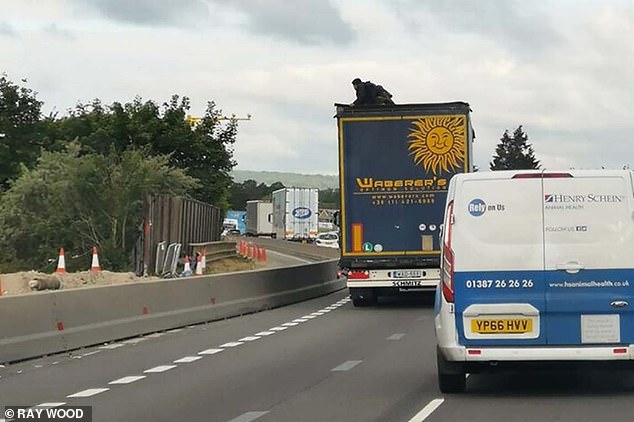 According to a witness, the man looked around for five minutes before jumping back inside the lorry

Mr Wood added: ‘He came up through the roof of the trailer, before going back under cover.’

The lorry and trailer disappeared in the 7.30am congestion and Mr Wood doesn’t know where the man eventually jumped out.

The lorry was showing the logo of Waberer’s, a haulage company based in Hungary.

If the man had sneaked into the trailer in Hungary he would have travelled 2,400 kilometres and taken around 24 hours to reach Britain.

However, he could have also got on board the truck when it stopped at the French side of the Channel.

Kent Police have been informed of the stowaway.