It’s never happened to me before… Captain sailed mega-ship in the shape of a penis before getting the vessel stuck in Suez Canal, prompting fears of ‘catastrophic delays’ to deliveries

The race to unblock the Suez Canal took a bizarre turn today as eagle-eyed observers noticed that the cargo ship obstructing the canal had steered a rudely-shaped course into the waterway.

The MV Ever Given’s ill fortune began in the early hours of Tuesday when it left a phallic tracking pattern described as ‘innocent, but terrible luck’ on its approach to the canal.

The unfortunately-shaped pattern was picked up on marine traffic websites tracking the Panama-flagged vessel on its journey from China to Rotterdam.

But matters took a more serious turn on Tuesday afternoon when the Ever Given veered off course in a sandstorm and blocked the entire Suez Canal, which handles 30 per cent of global container ship traffic a day.

Dr Sal Mercogliano – a maritime historian and former merchant mariner – previously warned of ‘catastrophic delays’ to supplies of vital goods, from food to fuel and even vaccines for every moment the canal remains closed.

Workers racing to free the ship have today managed to partially refloat the vessel, but have been unable to say how quickly they will be able to fully remove the Ever Given or clear a backlog of roughly 100 ships.

Port authority GAC, which controls traffic through the canal, said the 1,312ft-long, 175ft-wide, 200,000-ton MV Ever Given is now being moved alongside the bank.

Analysts revealed today that 10 tankers carrying 13 million barrels of crude oil are already stuck, causing oil prices to spike 2 per cent over fears of a shortage. It is not clear what cargo the Ever Given is carrying.

The only alternative to going through the canal is for vessels to sail around the Horn of Africa and approach the Mediterranean from the west, adding 14 days and 5,000 nautical miles to the journey.

It still is not clear exactly how the accident happened – GAC said the ship suffered a ‘blackout’, meaning it lost power and steering before becoming stuck; but a spokesman for the canal authority said a sandstorm had blocked the captain’s view and blown the ship off course before it got jammed and lost power. 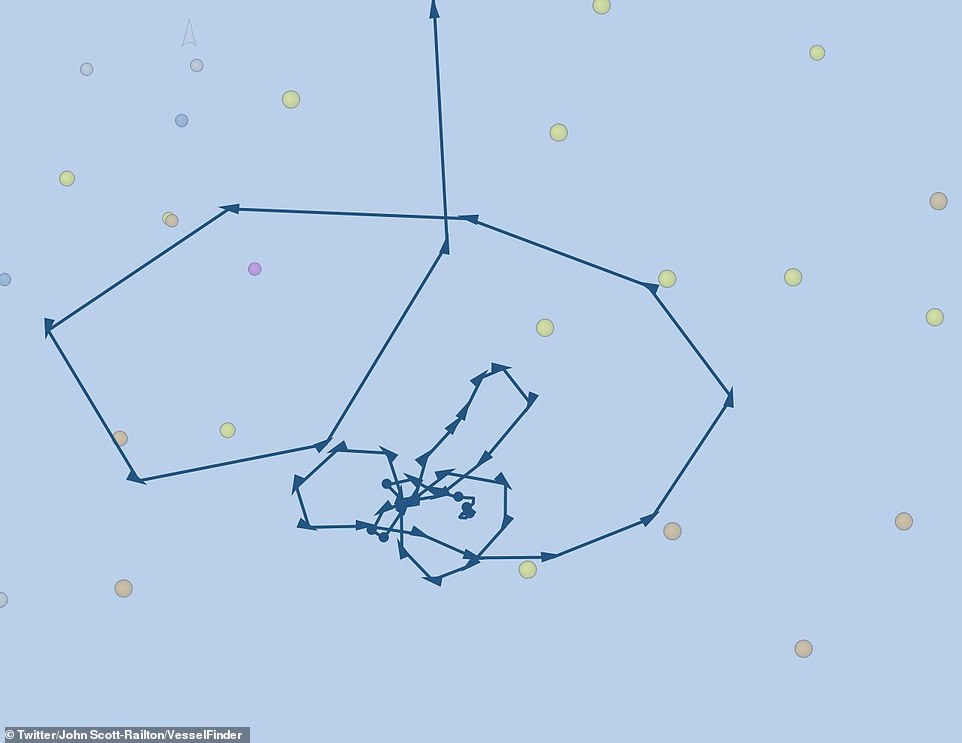 Unfortunate: The MV Ever Given’s bad luck began before it even entered the canal as it left a rudely-shaped holding pattern in the night from Monday to Tuesday, before blocking the Suez Canal after veering off course in a sandstorm

The MV Ever Given – a 1,312ft long, 175ft wide, 200,000 ton cargo ship owned by shipping firm Evergreen – has drifted sideways and become stuck across the width of the Suez Canal, blocking one of the world’s busiest shipping lanes 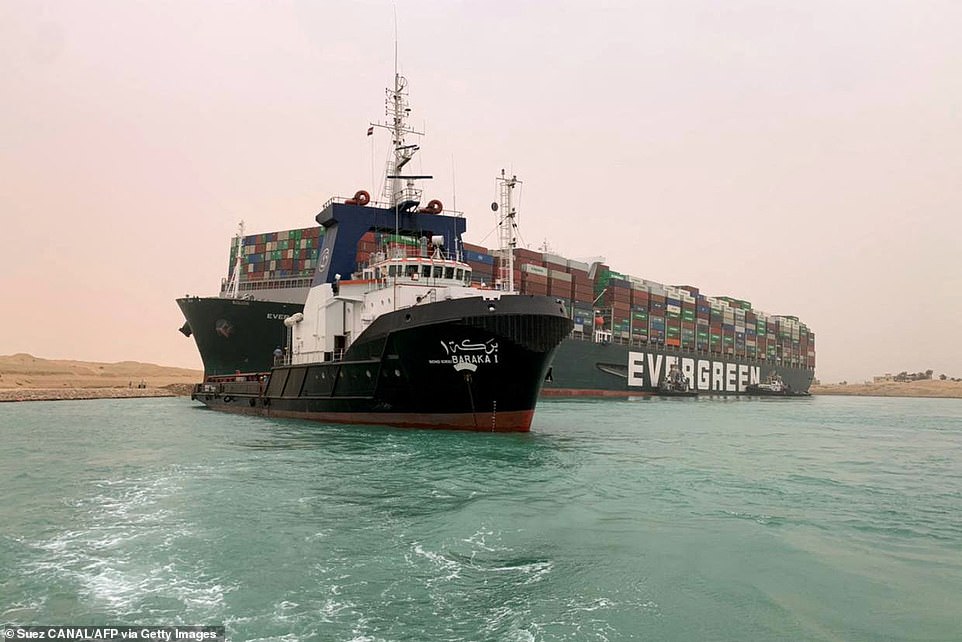 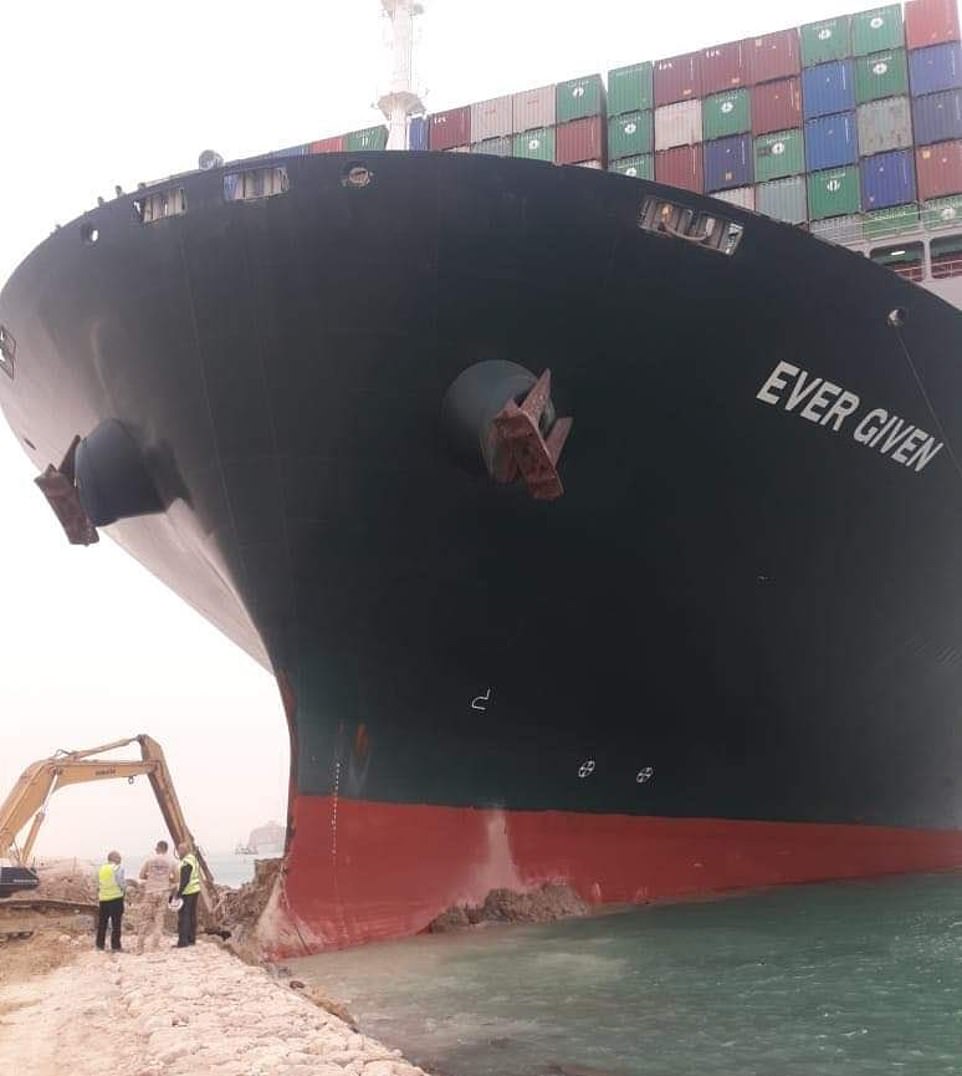 The Ever Given is now aground with its bow lodged in the eastern wall of the canal. Workers are attempting to dig the bow free while tugboats try to shove it back into the waterway 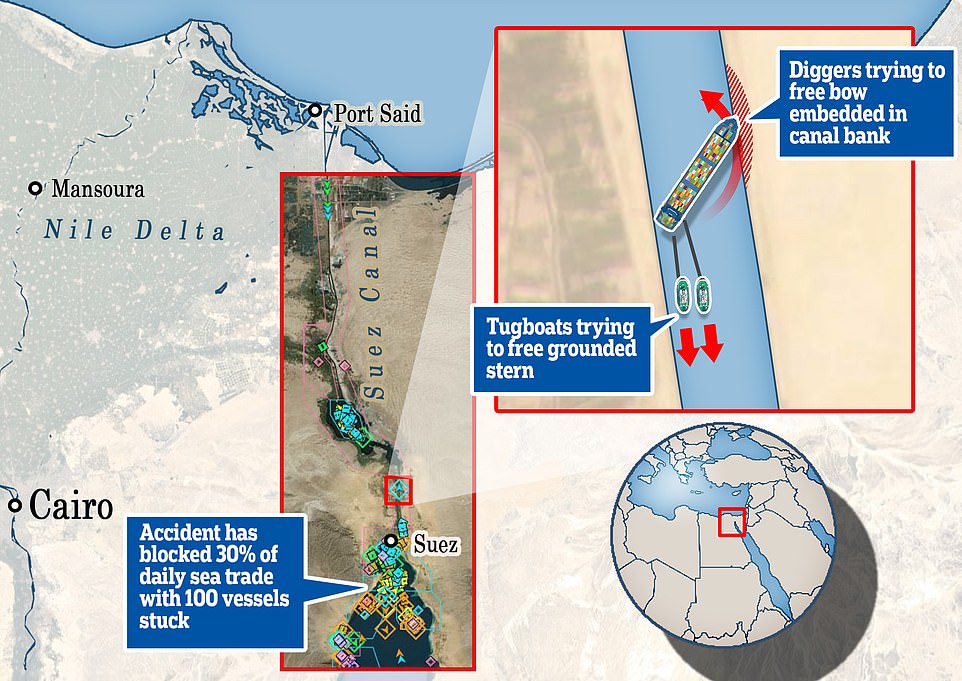 The rescue operation involves diggers trying to excavate the boat’s dolphin-nose bow from the eastern bank of the canal where it has become embedded, while tugboats attempt to shift the grounded stern. Meanwhile, a huge amount of sea traffic is building up on either side of the blockage 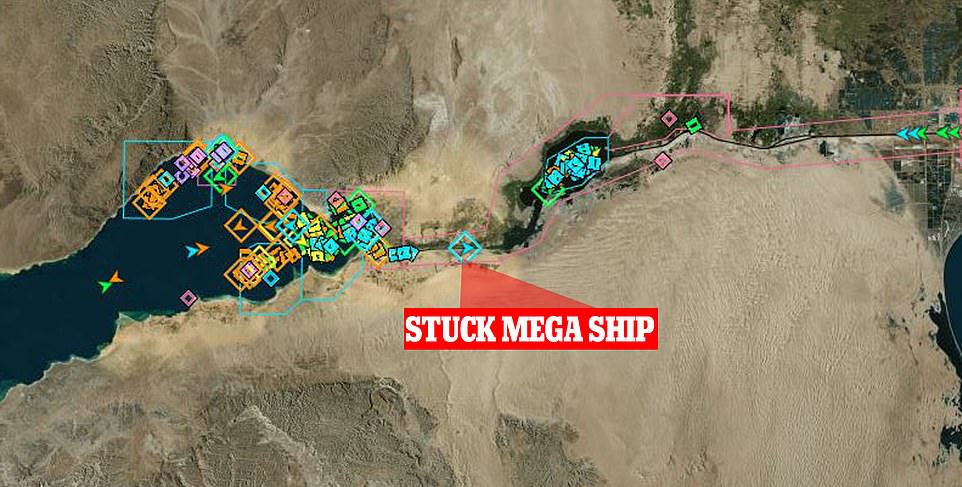 Ship tracking data reveals the extent of the vessels building up on either side of the stuck ship, with 100 of them thought to have been caught up so far – and 50 more arriving per day 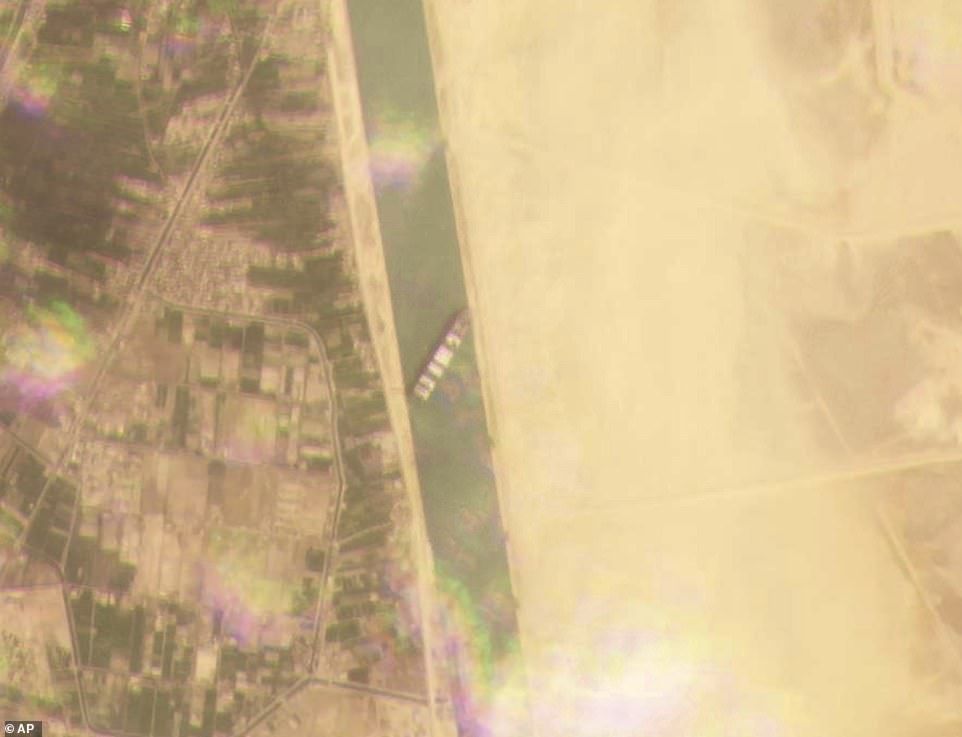 Satellite images show the vessel lodged in the canal. Because the boat is longer than the waterway is wide, options for moving it are limited

Options are therefore limited. Because the boat is wider than the canal itself, it has to come out the exact way it went in. Except that both ends are out of the water, meaning it has no steering.

Virtually every tugboat in Egypt has been sent to try and pull or push her off the wall of the canal, while workers are trying to dig out the canal walls and refloat her, bringing her steering back online.

Efforts have been underway for almost a day, but have so far proved fruitless. The task resumed on Wednesday morning, with no estimate as to how long it will take.

If tugboats and diggers aren’t enough to free the vessel, then they only other option is to starting removing weight – either by dumping fuel or unloading cargo, piece by piece.

Speaking to BBC Radio 4, Dr Mercogliano, who is based in North Carolina, warned that the vessel is in ‘a very precarious position’.

‘With both ends of the vessel up on the beach there’s a tendency for her to sag in the middle, so they have to be very careful in trying to get her off [the wall],’ he said.

‘If they can’t get her up off that position with the tugs they’re going to have to start getting fuel out of her, and then containers.

‘But the difficulty with getting containers off her is that she’s so high, so tall, that it will be very difficult to get the correct size crane in there.’

Underlining the importance of the canal to global trade, he added: ‘The world economy, with Covid, you know how much things have slowed down with getting goods around.

‘Now all of a sudden you add this to that, you’re going to have delays with getting goods to market, we’re talking vaccines, we’re talking manufacturing goods, food, everything, fuel too, it’s potential catastrophic delays.’

Data from Marine Traffic shows several tugs attending to the stricken vessel, though they have failed to pull it clear.  The vessel is carrying cargo from Yantain, China to Rotterdam, Netherlands. 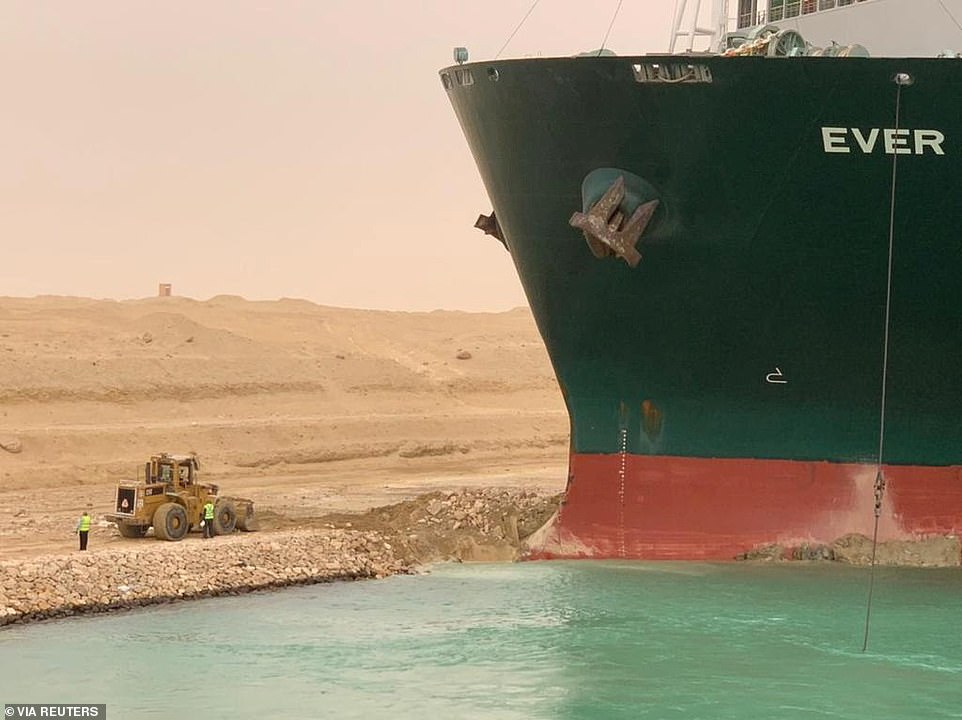 Workers are using diggers and heavy machinery to try and dig away the wall of the canal in the hopes of refloating the vessel, meaning its steering should become operational again 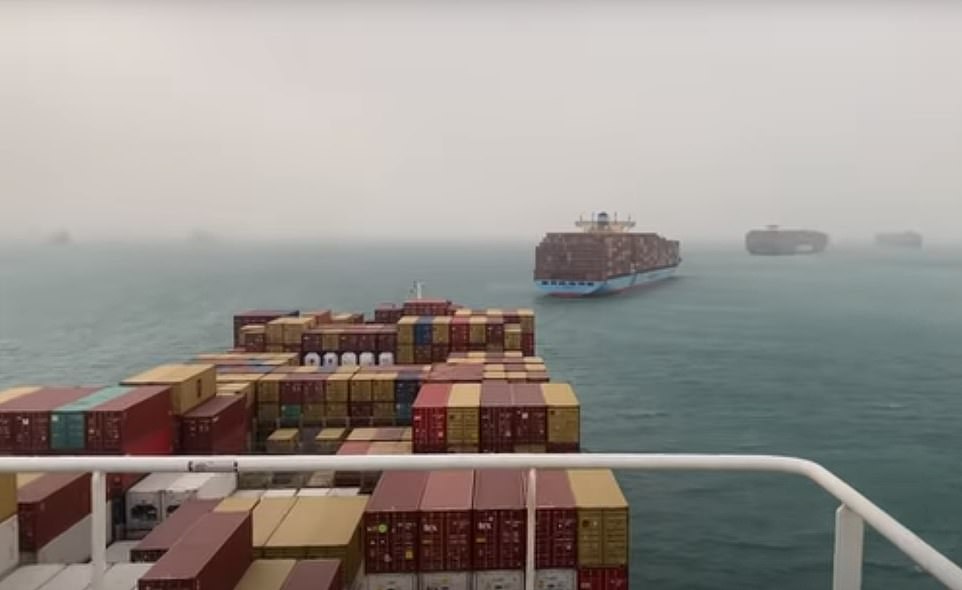 The Ever Given was part of a 20-ship convoy heading north through the canal, from Suez Gulf into the Mediterranean, and since becoming stuck has caused a 100-ship tailback 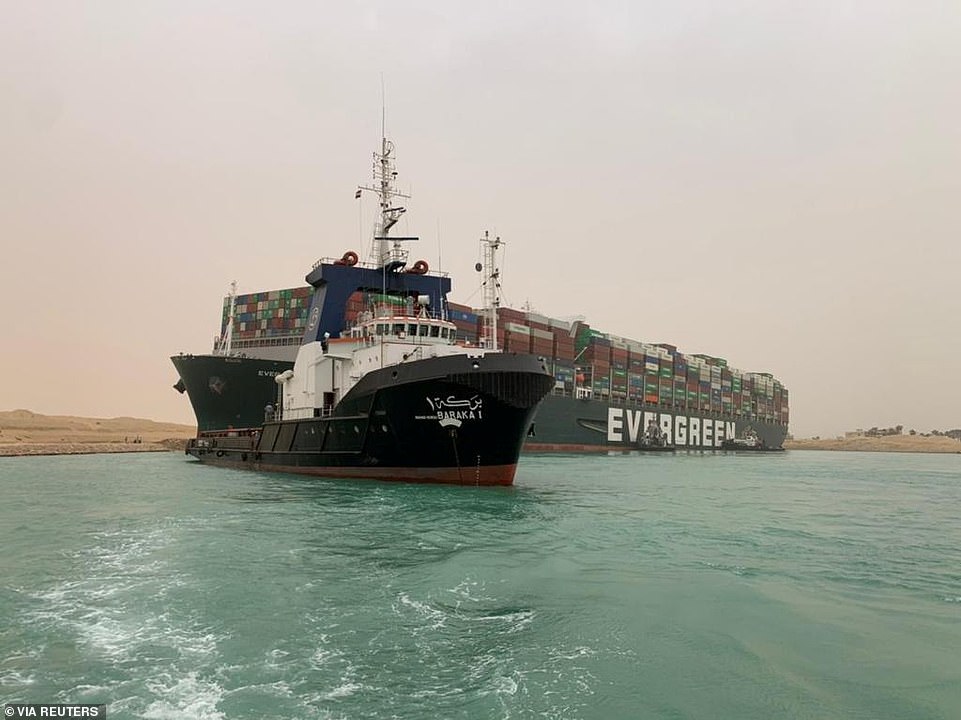 Virtually every tugboat in Egypt has been drafted in and are trying to push or pull the huge container ship off the canal walls,  but their efforts have so-far proved fruitless 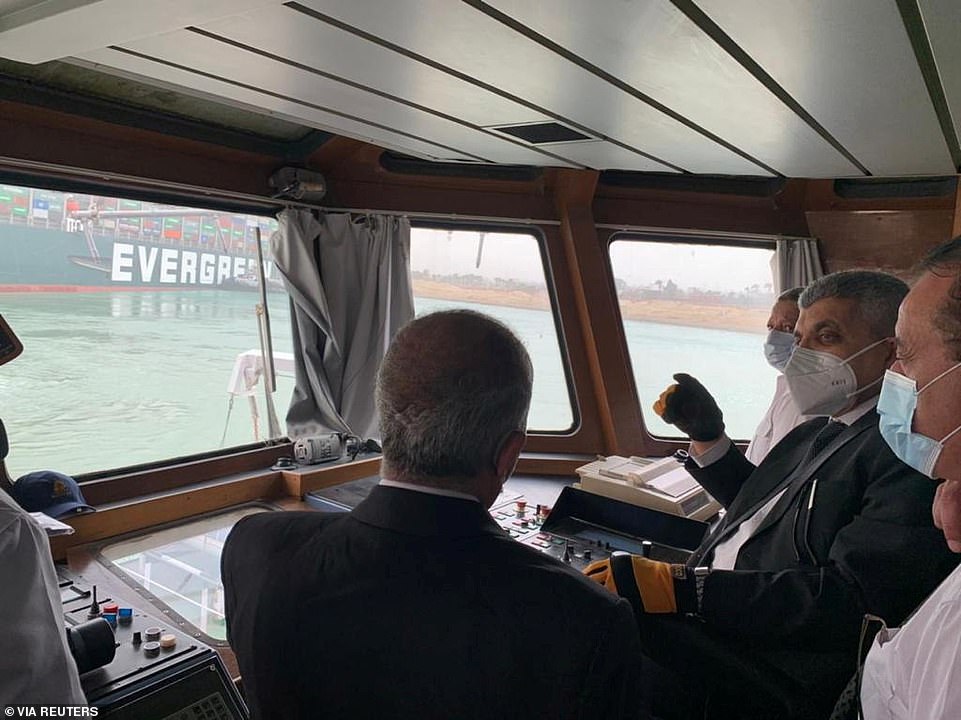 Egyptian officials overseeing the rescue operation discuss their options from on board a tugboat, as the stricken Ever Given is seen through the window

Opened in 1869, the Suez Canal provides a crucial link for oil, natural gas and cargo being shipping from East to West. Around 10 per cent of the world’s trade flows through the waterway and it remains one of Egypt’s top foreign currency earners.

In 2015, the government of President Abdel-Fattah el-Sissi completed a major expansion of the canal, allowing it to accommodate the world’s largest vessels.

However, the Ever Given ran aground before that new portion of the canal.

The incident Tuesday marks just the latest to affect mariners amid the pandemic. Hundreds of thousands have been stuck aboard vessels due to the pandemic.

Meanwhile, demands on shipping have increased, adding to the pressure on tired sailors, Mercogliano said.

‘It’s because of the breakneck pace of global shipping right now and shipping is on a very tight schedule,’ he said. ‘Add to it that mariners have not been able to get on and off vessels because of COVID restrictions.’

The Suez canal was first opened to marine traffic in 1869, and last year almost 19,000 ships passed through it carrying more than one billion tonnes of cargo, according to the Suez Canal Authority.

The canal was closed for several months after the 1956 Suez crisis and again in 1967 for eight years following the Six- Day war.

Officials on February 6, were able to guide 40 vessels from the Red Sea into the Mediterranean while 35 ships went south.

The Suez canal, which is around 120 miles long links the Persian Gulf and the Mediterranean and is the shortest shipping route between the Atlantic and the Indian Ocean.

Before the canal, shipping from Europe either had to go overland or risk going around Cape Horn and the South Atlantic.

In April 1859, construction of the canal officially begins, much of the work financed by France.

It was opened for navigation on November 17, 1869 for vessels from all countries, although the British government later wanted to have an armed force in the area to protect shipping interests having picked up a 44 per cent stake in the canal in 1875. 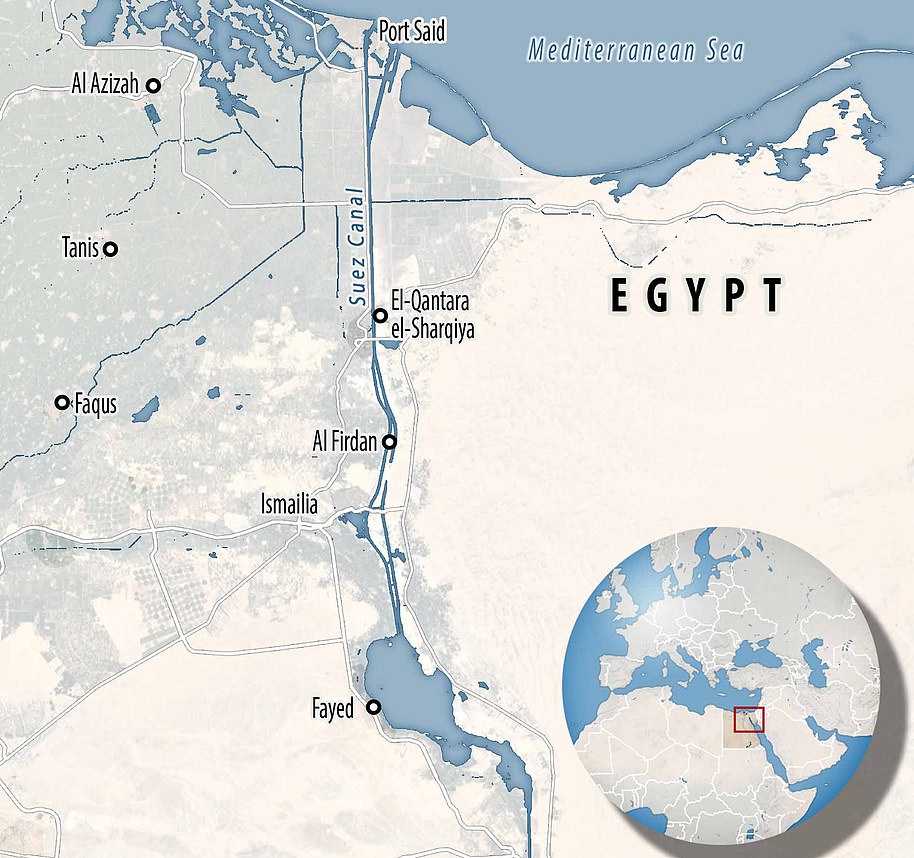 From then, while nominally owned by Egypt, the canal was run by Britain and France until its until its nationalisation in 1956 .

The nationalisation by Nasser saw Britain and France launched an abortive and humiliating bid to recapture the vital waterway.

The canal was shut briefly following the attempted invasion.

However, in 1967 the canal was shut for eight years following the Six Day war with Israel.

Due to the instability in the region, the canal remained closed until 1975 – its longest ever closure, as the waterway had been mined and some vessels had been sunk in the main channel.

The Suez Canal is actually the first canal that directly links the Mediterranean Sea to the Red Sea.

In 2015 a new section of the canal opened, allowing vessels to traverse the waterway in both directions at the same time.

Future plans will see the two-lane system extended across the entire network- doubling current capacity of the canal.

The largest cargo vessels pay more than £180,000 in tolls to traverse the canal.

On average about 40-50 cargo vessels use the canal on a daily basis in a trip that takes around 11 hours, as speed along the waterway is limited to about 9kts to prevent the banks of the canal getting washed away.

Along the canal there are emergency mooring slots so vessels can pull over if they are suffering a mechanical issue.

When the canal first opened, the channel was approximately 26 feet deep and 72 feet wide at the bottom. The surface was between 200 and 300 feet wide to allow ships to pass.

By the 1960s, dredging of the canal increased the depth to 40 feet and widened the waterway to allow larger vessels.

Now, the minimum depth of the canal is 66feet, though this is been increased to 72 feet – allowing even larger vessels.