A FOUR-year-old boy had dozens of parasitic worms removed from his body after he complained of feeling constipated.

Stomach-churning images from the operating room showed a metal bowl filled with the "writhing" creatures. 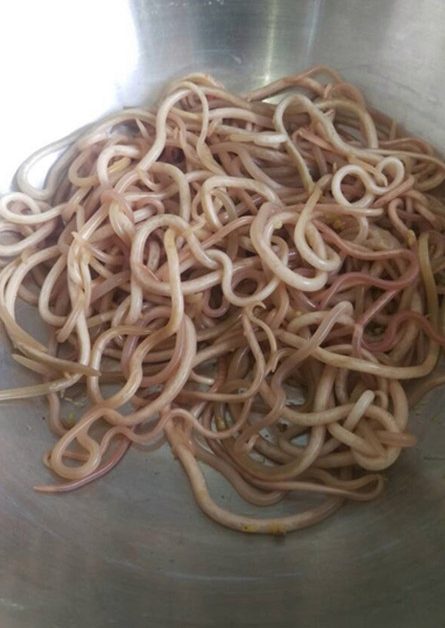 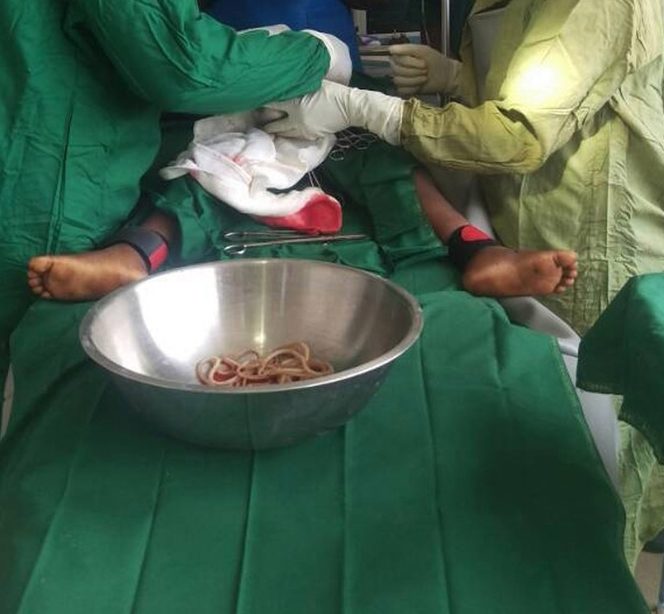 The youngster's mum had taken him to hospital after three days of stomach pain, vomiting and severe constipation.

He had also experienced bloating for around six months, according to an article published in the Journal of Medical Case Reports.

Doctors in Cameroon, west Africa, carried out a number of tests and diagnosed the boy with ascariasis – a parasitic worm infection in the small intestine.

The boy was given nutrients to rehydrate him and administered with paracetamol intravenously before doctors could operate.

Three days after being admitted, surgeons discovered his bowels were completely blocked by a "mass of writhing worms".

The team, led by Dr Valirie Ndip Agbor, extracted the "bundles of live worms" through a small incision in the boy's intestine.

Doctors said if the worms had not been removed they could have led to malnutrition, physical growth problems and poor memory and thinking skills.

The boy was allowed to go home a week later but had to continue taking medication to stop the infection returning.

During a follow up appointment the following week, medics were happy that his wound had healed and his bowel was functioning normally.

Doctors who reported on the case explained that the young boy was from a poor family in the rural Menchum Division in the north-west of the country.

They explained that his family hadn't been able to afford to take him for tests and the nearest hospital was 47 miles away via poor routes.

He hadn't been "dewormed" since birth – a procedure needed at least once a year to clear off adult worms and their eggs from the bowel.

The medics said ascariasis is the most common parasitic worm infection in the world, especially among those aged between two and 10.

Ascariasis is a type of roundworm infection. These worms are parasites that use your body as a host to mature from larvae or eggs to adult worms. Adult worms, which reproduce, can be more than a foot long.

One of the most common worm infections in people worldwide, affecting 800million people, it occurs most often in children in tropical and subtropical regions of the world — especially in areas with poor sanitation and hygiene.

Most infected people have mild cases with no symptoms, but heavy infestation can lead to serious symptoms and complications.

Ascariasis isn't spread directly from person to person. Instead, a person has to come into contact with soil mixed with human feces that contain ascariasis eggs or infected water.

In many developing countries, human faeces are used for fertiliser, or poor sanitary facilities allow human waste to mix with soil in yards, ditches and fields.

Small children often play in dirt, and infection can occur if they put their dirty fingers in their mouths. Unwashed fruits or vegetables grown in contaminated soil also can transmit the ascariasis eggs.

The whole process — from egg ingestion to egg deposits — takes about two or three months, but ascariasis worms can live inside the body for a year or two.

Children living in poorer countries are at a higher risk of the parasites, which are spread through accidentally eating human poo.

This can happen when an infected person defecates outside, for example in a garden or field, and eggs are deposited on the soil.

Ingesting those eggs can happen when hands or fingers that have contaminated dirt on them are put in the mouth, or by consuming vegetables and fruit that haven't been properly washed, according to the Centers for Disease Control and Prevention.

Poor sanitation and contaminated food, soil and water are generally to blame, they explained.

Dr Agbor said: "This highlights the importance of regular deworming (biannually or at least annually) to clear off adult worms and their eggs from the bowel, in order to reduce worm burden and prevent the occurrence of life-threatening chronic complications.

"Heavy and chronic infection could lead to complications such as malnutrition, poor physical growth, and poor memory and cognition, especially among school-age children because the adult worms live in the small bowel and feed off its content."

Dr Agbor added: "The community needs to be sensitised on the importance of regular deworming and healthy practices such as: boiling water prior to drinking; proper hand washing with water and soap before handling food; and proper washing and cooking of vegetables before their consumption.

"Discouraging practices such as the use of human faeces as manure in farms, while encouraging the use of toilets (avoiding open defecation) and development of proper animal (particularly pig) sewage disposal systems could equally help prevent transmission."