A taxi driver has slammed police who blamed coronavirus for not investigating a break-in of his cab, even though he had CCTV footage showing the thieves and their number plate.

Asghar Butt says he made a report to police and twice visited his local station after thieves broke into his Toyota Prius outside his home in Longsight, Manchester.

Mr Butt says the thieves stole his Sat Nav, two mobiles phones and £140 in cash – some of which was in a charity box.

But despite having clear CCTV of the incident, which shows two thieves searching the vehicle, police returned his call for help by saying that there would be no investigation due to their ‘COVID crime screening policy’.

Mr Butt says in a latter part of the CCTV footage, not included below, the two thieves are seen leaving in a vehicle, which can be identified by its number plate.

Greater Manchester Police, who say they have seen the CCTV, told Mr Butt in a message that the decision was made because the incident did not ‘involve threat, risk, harm or vulnerability or likely public interest factors.’

In a later statement, the force said it was due a cut in the number of police officers. 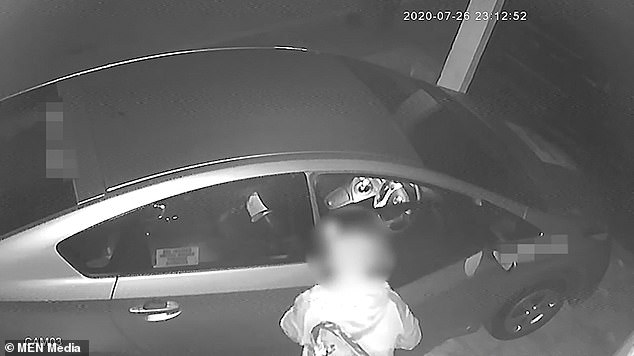 Asghar Butt, says he made a report to police and twice visited his local station after thieves broke into his Toyota Prius (pictured) outside his home in Longsight, Manchester

But the decision not to investigate has angered father-of-two, Mr Butt, who has accused officers of ‘doing nothing’ about minor crime and said the incident makes his family ‘feel vulnerable’.

He said: ‘I have CCTV which shows the time, the people and the car registration they arrived in. I told them everything and then I get this message saying they won’t investigate.

‘It’s not right. I feel insecure and helpless in this city.

‘Things keep happening – once passengers smashed my windscreen, teenagers are throwing eggs and stones at our cars, people are running away without paying.

‘It’s happening every day but the police are not doing anything. I’m helpless, nobody is listening.

‘If they are not investigating these people they will do these things again and again.’

CCTV from the theft, which took place on July 26, shows a thief, who is not hooded, gaining access to the vehicle.

He then appears to search the inside of the vehicle, before being joined by a hooded individual.

The pair then walk away from the scene. Mr Butt says his CCTV captured their number plate as they made off.

Greater Manchester Police have confirmed that they are no longer investigating, due to ‘fewer officers, increased complexity of demand and potential further cuts’. 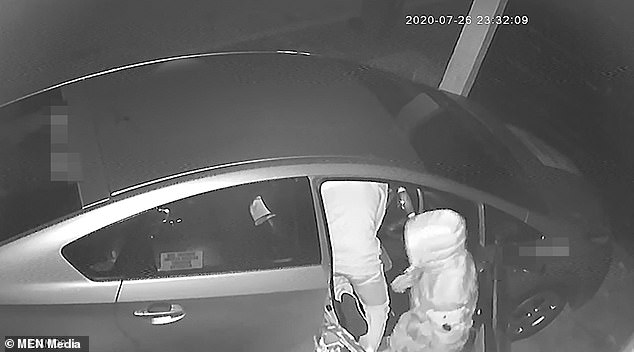 A second thief joins in and also begins searching the vehicle, which is parked outside Mr Butt’s home 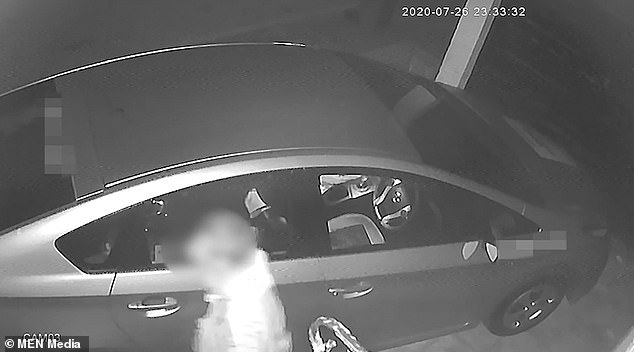 After looting the vehicle, the two thieves then leave the area, with their number plates apparently seen on CCTV

However, the force stressed they were committed to reducing the impact of this by transforming the way they work.

A spokesman said: ‘With thousands of fewer officers across Greater Manchester, increased complexity of demand and potential further cuts on the horizon, we have had to make changes to the way we work to meet the public’s need.

‘We are absolutely committed to reducing the impact of this reduction in police resources on the people of Greater Manchester and have transformed the way that we work to ensure we are providing the best possible service.

‘When reports are made to police we make an assessment on how best to respond based on the threat, risk and harm posed to the public.

‘The report is then assessed and depending on its severity, officers could be deployed immediately, later the same day or the call may be able to be resolved over the phone without having to send someone out.

‘Inevitably, we have to make difficult decisions when prioritising calls to provide the right service to those who need it most.

‘We have issued smartphones and tablets to frontline staff to enable them to spend more time out in the community, while we are transforming the way we work with a new operational policing system.

‘We also focus on prevention, working with partners and communities to problem solve the factors that contribute to recurring crime ‘hotspots’.

‘We will continue to do everything we can, alongside our partners and communities, to keep the people of Greater Manchester safe and provide the best service we can to those who need us most.’