Tanner Cross, a PE teacher from Leesburg Elementary School in Virgina, is suing the school after he was placed on paid leave and barred from school grounds after refusing to use transgender pronouns. During a school meeting board in May, he said: “I am speaking out of love for those who suffer with gender dysphoria… it is not my intention to hurt anyone.

“I am a teacher but I serve God first, and I will not affirm that a biological boy can be a girl and vice versa because it is against my religion. It is lying to a child, it is abuse to a child, and it is sinning against our God.”

Mr Cross was speaking against a drafted school policy that would require staff to use the preferred names and pronouns a child identified with. The policy would also allow transgender children to take part in sports in the group of the gender they identify with.

A fellow school board member said the policy is meant to prevent children from feeling isolated and marginalised for their differences. 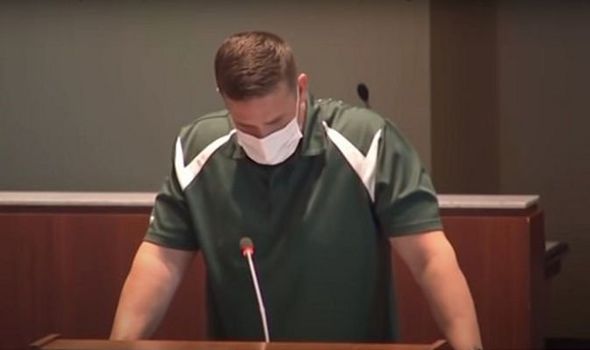 Shawn Lacey, principal of Leesburg Elementary, sent an email  to inform parents, it read: “I am contacting you to let you know that one of our physical education teachers, Tanner Cross, is on leave beginning this morning.

“In his absence, his duties will be covered by substitute staff already working in our building.”

On Tuesday, Mr Cross filed a lawsuit in Loudoun County Circuit Court alleging that school administrators violated his right to free speech and his right to the free exercise of religion, as granted in the Virginia Constitution.

The lawsuit details Mr Cross’s religious beliefs and explains that he believes God created two genders, male and female, and that his faith “commands him to tell the truth and not lies”.

It goes on to say: “[Mr Cross] does not believe that every student or teacher has to accept his view. But he also believes that teachers should not be compelled to say things that they do not believe to be true.”