A family who were hiking in Canada filmed the terrifying moment a bear stalked them for almost a mile.

Brighton Peachey was hiking in Whistler, located in the Canadian province of British Columbia, with her husband Michael and kids last week when she noticed the black bear following them.

She begins filming as the beast began approaching her husband and two of their sons, Griffin and Watson, as she carried their third.

‘Ok he’s following you babe’,’ she told Michael before she began to shout at the bear to try and scare him away.

Her husband, who had their baby strapped to his back, started to back away with his son before turning round and waving his arms to intimidate the bear. 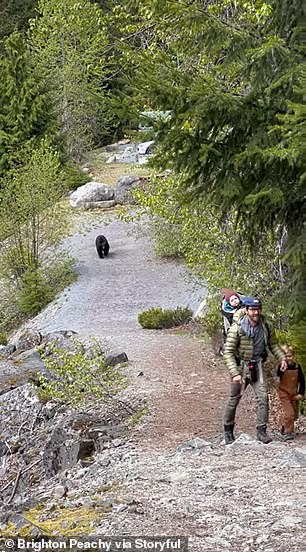 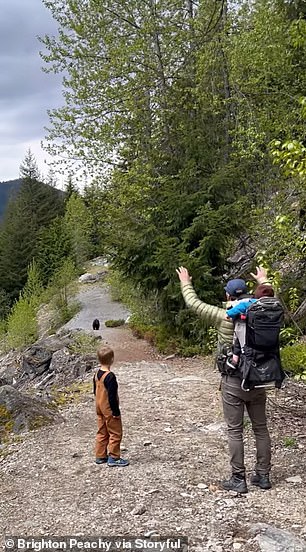 Brighton Peachey and her husband, Michael, were hiking a trail in British Columbia when they came across a black bear that followed the couple and their three young children for about 20 minutes and for more than half a mile 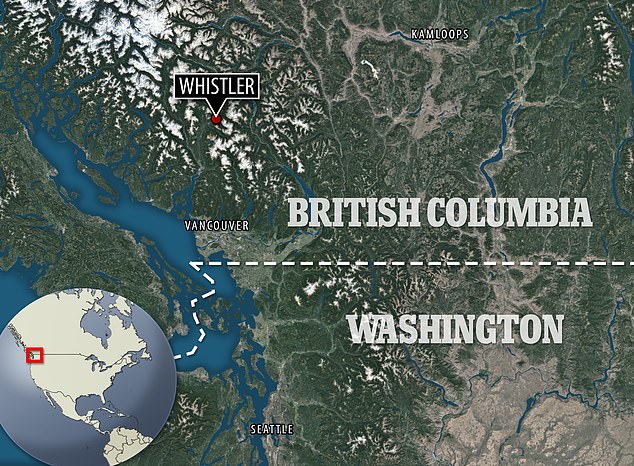 The family of five’s scary encounter with the black bear happened near Whistler, one of North America’s most popular skiing and reputable ski resorts, in British Columbia, Canada

Michael then instructs his wife to go up the trail with the children before Peachey takes her bear spray out and tells Griffin not to run again once more.

‘Can we play dead yet? Can we play now?,’ Griffin asks his mother, before she tells him to ‘walk faster please.’

While the family continues to walk away from the bear, which seems to have caught up with them, Michael tells Griffin that although the bear ‘doesn’t want to bother us, we don’t really want to get close to him.’

The father-of-three then tells his son to get in front of him and that it’s not a good time to ask too many questions.

Afterwards, Peachey records herself close-up to the camera with one of her two youngest sons and seems worried that the bear is still following her and her family before pulling off an anxious smile.

‘Hey bear! Hey!,’ she yells one more time in an attempt to scare the animal away while carrying one of her kids in her arms.

‘You wanted to see a bear,’ Michael says at the end of the footage. The bear went on to follow the family for about 20 minutes and for more than half a mile. 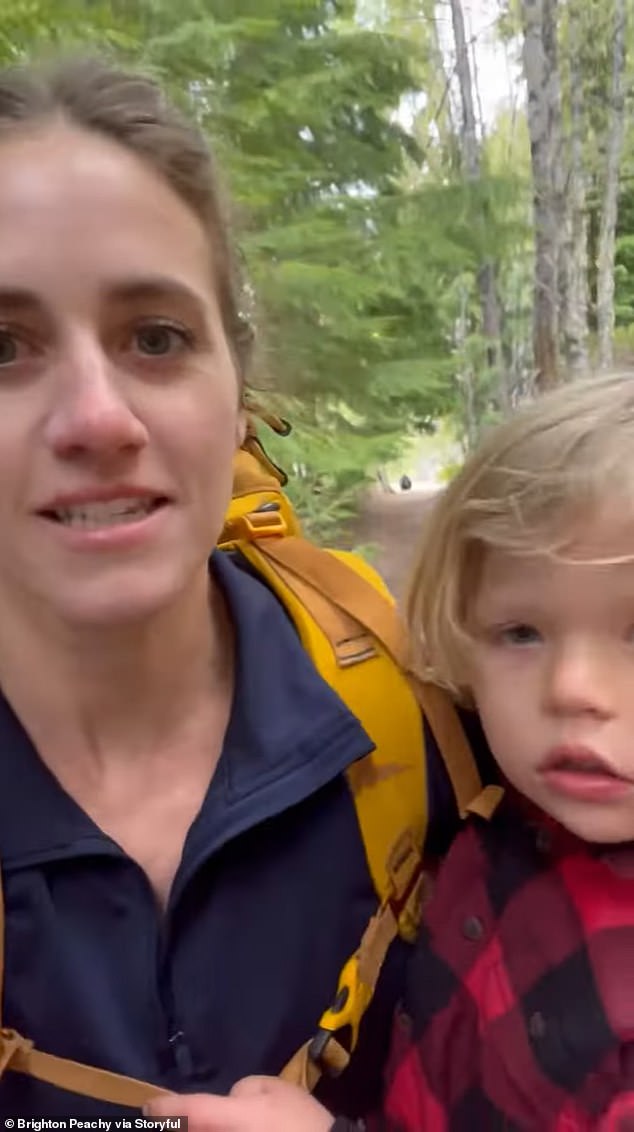 Peachy and her family continued to hike up the trail while the black bear was still walking behind them. Pictured: Peachy carrying one of her three bears 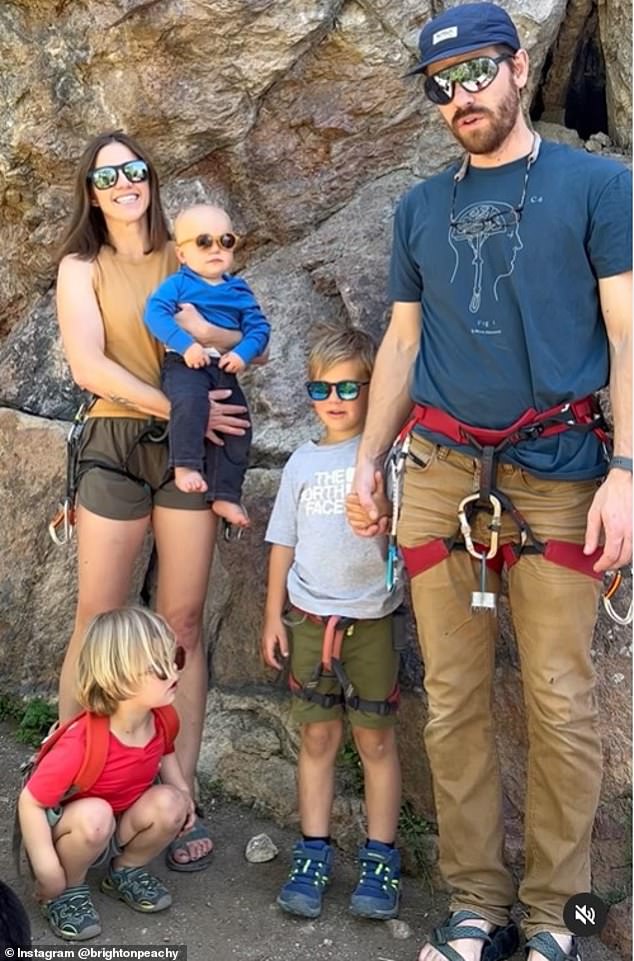 Peachy and her husband, Michael, both pictured with their three boys, who are all between ages one and six

Later on, Peachy shared a ‘Part II’ video of the family’s scary encounter with the bear on Instagram along with the caption: ‘We eventually ran into another group of hikers but even the big group didn’t detour the bear so we all kept hiking down the train together.’

‘So I threw Watson in the trail magic so that we can move faster,’ she said while walking with one of her two other sons. ‘Because we’re not sure if the bear is still following us or not but it followed us on the trail for long ways and we were doing all the things that you’re supposed to do.’

‘Pick up small children, yell, make a lot of noise, slowly move away from the bear but it just didn’t care,’ she further said.

The family is then seen in the second part of the footage being on edge while heading back to where they came from and where they saw the bear.

‘We made it back safe,’ Peachy shares later on Instagram. ‘This is the rock from the first clip that the bear came out from behind for comparison of how big it was.’

A post shared by brighton | outside family adventures (@brightonpeachy) 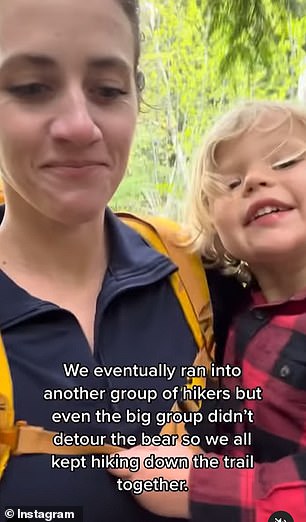 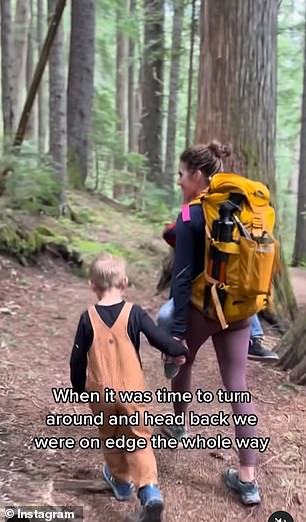 Peachy provided an update on the encounter, sharing that her and her family linked up with a group of hikers at one point during the trail, which still didn’t put off the black bear. They later turned around to head back where they were staying and ‘were on edge the whole way’ 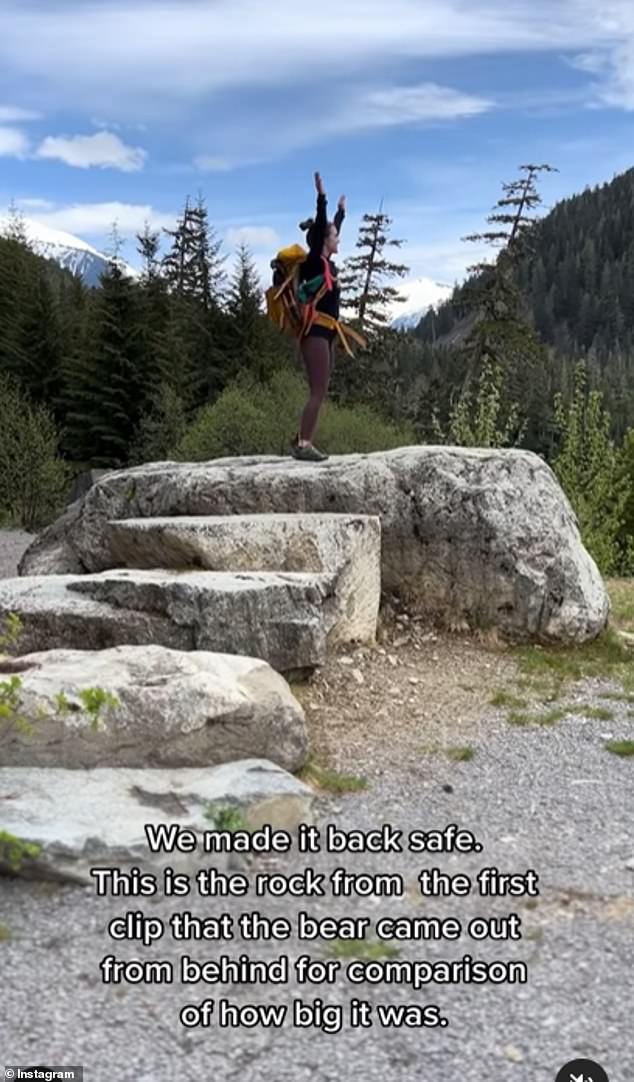 ‘We made it back safe,’ a relieved Peachey shared. ‘This is the rock from the first clip that the bear came out from behind for comparison of how big it was.’

After the scary bear encounter, Peachy shared the footage on Instagram along with the caption: ‘We later learned they’ve had to close this area multiple times because of this bear’s increasing aggressive behavior’.

‘This was scarier than the time I was mock charged by a bear because I had my kids with me & felt helpless,’ she added. ‘The bear was not intimidated by us at all, he just kept following us.’

There are roughly 50 black bears in Whistler, one of the most popular ski resorts in North America. Most of them mostly live in the forests and mountains surrounding the village.

Rangers nearby advise people not to run from bears and instead make the animals aware of human presence by speaking in an assertive voice, singing or, clapping hands together.