The Ministry of Defence is urgently trying to evacuate the terrified individuals and their families from war-torn Afghanistan amid fears Taliban death squads are hunting them down. 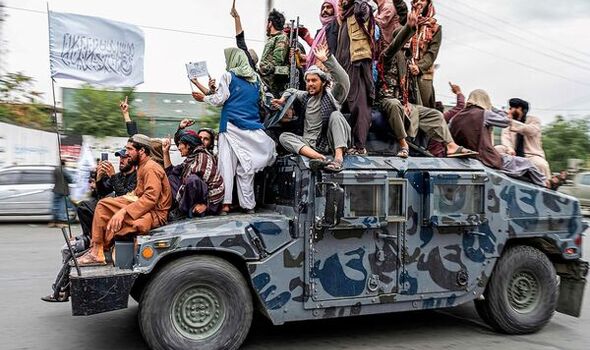 Defence chiefs estimate there are around 1,200 eligible personnel – many of whom are interpreters – who each want to bring “four or five” members of their family to the UK.

Officials are subsequently working on evacuating around 6,200 people. Another 1,150 people are stuck in Pakistan awaiting a flight to the UK. Others have fled to neighbouring countries such as Iran.

And officials who have worked with other Western nations during the 20-year war in Afghanistan have been captured as they attempted to leave the country.

The Taliban have set up checkpoints on all major roads and British intelligence suggests people who worked for Western governments have been tortured or executed.

Taliban fighters yesterday chanted “Death to America” and “Long live Islam” next to the now-closed US embassy in Kabul, a year after the hardline Islamists marched unopposed into the capital and Western nations raced to depart in a largely chaotic and embarrassing exit.

British officials are trying to speed up evacuations from Afghanistan. Two RAF flights carrying as many as 500 Afghans are landing in the UK each month from Pakistan.

The Afghan Relocations and Assistance Policy (ARAP) scheme has brought more than 10,100 eligible Afghans to the UK while the Afghan Citizens Resettlement Scheme will allow up to 20,000 to settle.

But more than 82,000 applied to come to Britain under the ARAP scheme after the Taliban takeover.

Officials are understood to be sifting through applications, many of whom do not meet criteria for the scheme.

Sources said there were still 9,500 people “stuck” in hotel rooms across the country and the Government was struggling to “work out what to do” with them.

But despite the accommodation backlog, ­ministers say they will continue evacuating people due to the threat the Taliban poses.

An MoD spokesman said: “We continue to relocate eligible Afghans who worked with the UK Armed Forces. All applications are assessed on a case-by-case basis. Processing timelines vary due to the complexity and circumstances of each applicant.”