The chief of Australia’s National Disability Insurance Scheme believes it has become too bureaucratic with participants having to “explain and justify” every aspect of their lives to a stranger.

“The NDIS was never meant to be about public servants making hundreds of decisions about the life and supports of participants,” National Disability Insurance Agency CEO Martin Hoffman told a parliamentary inquiry on Tuesday. 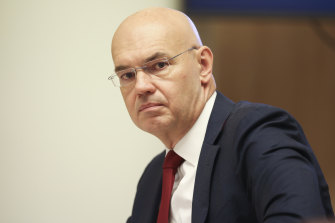 Mr Hoffman said participants currently needed to “explain and justify” to a planner every aspect of their life and activities to show why the NDIS funding was required.

“A process of explaining and justifying, if not begging and bargaining. That’s not choice and control, that’s not dignity,” Mr Hoffman said.

He said problems with the NDIS were a result of trying to do something at scale that was “fundamentally impossible” – make hundreds of individual decisions for hundreds of thousands of participants every year in a timely way. This had also led to the significant growth in the cost of the NDIS over the past few years.

Mr Hoffman said the NDIS needed to return to the original concept of the scheme now the transition from state and territory programs was complete.

He said this involved participants having fully flexible use of their funding and a consistent way of determining the overall amount that didn’t cost the person with a disability anything.

The NDIS is trialling the use of independent assessments, where NDIS participants are interviewed by a government-contracted allied health professional to assess eligibility and overall funding instead of submitting reports from their own medical specialists.

Participants and disability groups fear the independent assessments won’t give a true picture of people’s needs, will be conducted by professionals with no expertise in their disability and are a stealthy way of cutting costs.

Professor Bruce Bonyhady, one of the key architects of the NDIA, told the parliamentary inquiry last month he totally opposed the independent assessments, which he said were driven by cost cutting and would “fundamentally damage the NDIS”.

Mr Hoffman acknowledged the proposals had “caused real fear, concern and upset in the disability community”.

“I deeply regret that our genuine attempts at communication and consultation have evidently not to date been sufficient or appropriate,” he said.

The NDIS had planned to begin mandatory assessments by the middle of the year. However the new NDIS minister, Senator Linda Reynolds, last month paused the rollout, saying she would closely assess the independent trial outcomes before introducing legislation.

Mr Hoffman said the agency would be absolutely focused on getting the NDIS right in coming months.

He said he wanted NDIS participants to be able to decide how to use the funding and how much support worker time, therapy, or group classes they needed.

The inquiry, which is holding a public hearing in Geelong on Tuesday, will also hear from the Rights Information Advocacy Group and the Corangamite NDIS Reference Group.