Imagine waking up in New York without the New York Times, newspaper kiosks shut down and hawkers off the streets.

That is what many Pakistanis have been feeling for months as Dawn – Pakistan’s largest English-language newspaper – has disappeared from their breakfast tables.

A massive bout of censorship of TV channels, newspapers and social media is setting the stage for parliamentary elections on 25 July.

The media and some political parties are being micromanaged by an establishment alliance of the army and the judiciary, according to journalists and the former ruling party – the Pakistan Muslim League – and its leader Nawaz Sharif, who was prime minister until being ousted last year on corruption charges and barred from politics.

The army and judiciary deny this.

However, it is the battle between Dawn and the establishment that has drawn most attention.

Dawn is the unofficial newspaper of record – indispensable for businessmen, diplomats and military officers alike – and known for its influential editorials that affect Pakistan’s image worldwide.

Moreover, Dawn has a particular reverence in the national psyche because it was established by Pakistan’s founder Mohammed Ali Jinnah before Partition, when Muslims in British India had no voice to communicate with the colonial power.

Since then, Dawn has ironically long been viewed by many as the establishment paper. 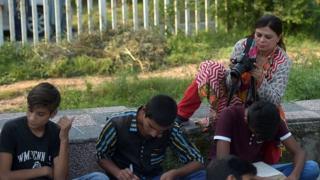 Dawn has faced intimidation, harassment of its journalists, a ban on hawkers distributing the newspaper in military cantonments in every city in the country, cable operators told to take its TV channel off air, and massive cuts in revenue as advertisers are warned not to promote their goods in Dawn.

Last year, in the province of Balochistan, the newspaper was unavailable for weeks on end.

Meanwhile, other media personalities have faced kidnappings, arrests and physical abuse by mysterious hooded men who no journalist dare name – but every journalist in the country is convinced belong to the military intelligence agencies.

But after maintaining months of silence as to what it has endured, or what exactly the military’s complaints are, Dawn recently published a frank and stinging editorial.

The editorial describes its important, factual reporting about the serious rift between civil and military authorities during the Nawaz Sharif government, which had infuriated the military, and Dawn’s insistence on protecting the sources for its stories – a basic element of media ethics worldwide.

The editorial states that “a campaign of disinformation, libel and slander, hate and virtual incitement to violence against Dawn and its staff has necessitated placing certain matters on record”.

It added that elements “within or sections of the state” are not upholding constitutional freedoms.

Dawn said it has been under attack since late 2016, but with “greater intensity” since May this year.

Last year, the largest Urdu-language newspaper Jang and its sister TV news channel Geo were subjected to such massive financial pressures and intimidation that they could not pay their staff for three months.

Unlike Dawn, their senior editors appear to have reached some kind of compromise with the military.

Even more targeted are bloggers on social media who write what the army describes as anti-state propaganda.

Meanwhile, the military frequently and with some vehemence denies that it interferes with the press, that it is determined to safeguard a free and fair election on 25 July – although it does admit to monitoring social media commentary.

Defiance by the establishment against both civil society at home and the international community seem to be the order of the day.

Just hours after Pakistan was placed on the Financial Action Task Force (FATF) grey list for failing to act against terror financing from its soil, an extremist leader listed on Pakistan’s own terror watch list had his name removed and his party allowed to contest the elections.

His group – having adopted another name – has already registered dozens of candidates to stand in the polls.

Another well-known extremist group Lashkar-e-Taiba (or Army of the Faithful) is also fielding several hundred candidates for the elections, under a new electoral name.

Lashkar was declared a global terrorist group in 2014 by the UN, and its leader Hafiz Saeed has a $10m (£7.6m) bounty on his head.

Nobody admits to ordering these policy changes or justifying them. None of the multiple centres of power – the army, the judiciary, the interim government – have taken responsibility.

The press is too cowed to discuss the issue of why extremist groups have been given such protection and encouragement, when female bloggers like the well-known Gul Bukhari are being picked up in the streets of Lahore.

Much of the micromanagement that is going on in the elections has the same mysterious and unknown quality as to who is conducting it and why it is happening.

Pakistanis have a long way to go before they can comfortably read Dawn at breakfast every morning while journalists do not face harassment and intimidation for reporting the facts.