If a veteran cop hadn’t been prepared to turn a blind eye, Bob Marmion would never have made it to the Police Academy.

He had repeatedly turned up at the Russell Street Police Station recruiting desk trying to join. Each time he would stand as a bar was lowered to the top of his head to measure his height. Each time he was rejected as being a tad too short. 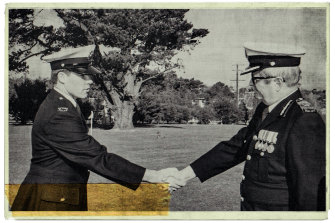 As he was just 18, he hoped he was still growing. This time the veteran senior constable looked up and said “stand over there, you know the drill”, then wandered away to his desk, seemingly distracted. Marmion took his opportunity, standing on tip-toe to raise the bar to the accepted height.

When the recruiter returned he looked deadpan, winked and said: “Hopefully you can stop pestering me now.”

It was Bob’s first introduction to a police shortcut.

He joined in 1976 as a fit (if slightly under-height) optimistic teenager weighing 80 kilos and was chosen to represent recruits in marching competitions.

And there was the nightmare – the one that would come back every night.

He was surrounded by vicious dogs herding him to long grass where a man was waiting with a shotgun to fire both barrels. “It was the same nightmare that kept coming back night after night.”

Marmion has written his story of the good and bad times of policing – and it is all the more compelling because he didn’t work in the high-profile squads and his investigations didn’t make the headlines.

He was one of thousands of police who work in stations, dealing with local calls, suburban crooks and life-altering tragedies that rarely make the media.

There was the country car crash where he and his partner used plastic garbage bags to collect body parts and the train fatality that left the victim decapitated, where they used a police dog to find the head.

Images washed away by multiple beers with fellow cops only to return in the dead of night.

Marmion, the sheltered kid from a private school, headed to the toughest station he could find to learn his trade: Broadmeadows.

While there was constant danger outside the police station, sometimes you weren’t safe within the four walls. Hearing a bullet zing past while sitting in an office chair, he thought the station was under attack. A fresh bullet hole in a noticeboard above his head seemed to confirm it. 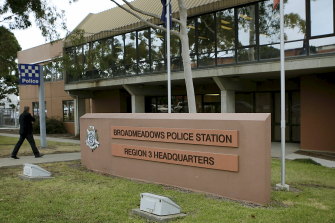 A quick investigation showed the bullet’s trajectory began in the mess room, where a sheepish- looking policeman was still sitting with his gun drawn. It turned out he had lined up the mugshot of a local crook pinned to the wall. His shot hit the picture between the eyes then travelled through several walls, narrowly missing the back of Marmion’s head.

Back then some police thought firearm safety rules were for scaredy-cats. In the 1970s and ’80s, even in the hectic suburbs, during the quiet times (usually 4am) police would congregate for a sneaky snag and a slab or two of beers at secret nightshift barbecues.

“What really surprised me were the shooting competitions, as a few bored policemen tried to shoot out the overhead street lights. As if they were going to hit anything that small with the .32. In all the barbecues I attended, I never saw a light shot out,” Marmion says.

One such barbecue was interrupted with a call to a shop break-in nearby. Naturally police ran off, revved up then sped off, wheels spinning, which did nothing for the fairways of the Glenroy golf club. When the course manager turned up at the Broady station to complain, the senior sergeant vowed to find the perpetrators. The manager helpfully produced a broken police blue light dislodged when a police car went under a low-hanging branch on a par five dogleg. The crime remains unsolved.

Marmion’s story exposes the dangers, stress, highs and lows of life as a cop. The drip, drip, drip nature of case after case that can build debilitating pressure.

He didn’t make the headlines but several times he was just a sliding-door moment from being on page one as a policeman killed by an armed offender: “I believe if I was a cat I would have used up eight lives.”

In his early days at Broadmeadows it was probably the useless heater in the divisional van that helped save his life, because he had to wear his police-issue overcoat.

Cornering an armed robber in a Glenroy house, the gunman raised his rifle and demanded Marmion drop his revolver.

When Marmion’s partner yelled from outside the offender was momentarily distracted, giving Bob a split-second chance. “Grabbing hold of the barrel, I pushed it further away from myself, while at the same time slamming the crook back into the alcove. He was bigger than I was and managed to keep his feet.

“We struggled to control the rifle. Suddenly, a shot was fired, then another and another, but miraculously I wasn’t hit. I could feel the recoil and the bullets passing along the barrel under my hand as I tried to hold the rifle barrel away from my body.

“I kneed the crook in the groin. With a grunt, he relaxed his grip on the rifle, allowing me to twist it around and smash it into his face. He dropped like a stone.”

Back at the station, after the offender was charged with armed robbery and attempted murder, Marmion changed out of his uniform. There were three bullet holes in the overcoat. Over a bellyful of beer at the local pub he was told to “get back on the horse” and report for duty the following morning.

“After a few more drinks, I went to bed. In the silent hours, I played the events of that day over and over in my head. Sleep was slow to come, but when it did, the nightmares started.

“Back to work tomorrow, as if nothing had happened. Such was the culture of the police force.”

There were hundreds of warning signs he chose to ignore, the nightmares, weight gain, hypervigilance, mood swings and the desire to avoid going home. 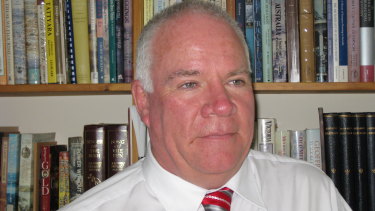 It was a long way back for ex-policeman Dr Bob Marmion.

After finding a charred body in a house blaze he woke convinced his wife was on fire. He ran to the kitchen, grabbed the extinguisher and doused her in foam to save her life. Except it was a nightmare. Understandably, she didn’t see the funny side. They would later divorce.

There were flashbacks after trying and failing to stem the blood flow from the split artery of a driver trapped in his shattered stolen car. In the moments before he died, the man repeatedly mouthed to the policeman: “Help me, help me.” He couldn’t.

The inevitable tipping point came with another near-death experience – but not for Marmion.

Confronting an armed man heading to kill his former girlfriend, Marmion pulled his gun and ordered the offender to show his hands. The man refused and, with his back turned, began moving his right hand towards his belt line.

“I had slowly pulled back the hammer on the .38 revolver, so it was fully cocked. It was pointing directly at the back of the man’s head. All it would take to kill him was a faint squeeze on the trigger.

“With the man’s hand reaching across his stomach, I was convinced he was reaching for a gun. As the man started to turn, I moved my finger to the trigger. It was that close; just a hair’s breadth from squeezing.

“There was no pistol in his waistband or pocket. It was later found under the driver’s seat. The whole time he had been testing me out, hoping I would have fired – he wanted a suicide by cop.

“The realisation I had once again come so close to taking a life was too much for me. Everything started welling up inside me. That was it; it was the end of my policing career. Shortly afterwards I went off on stress leave.”

And with that, he was gone. There was no farewell, no speeches and no plaque. “I was no longer part of it and was cut off. It was just ‘see you later’.”

Stressed, depressed and left without the support of his peers, Marmion continued his downward spiral, drinking, eating badly and gobbling powerful prescription painkillers “like lollies”.

A single parent with an eight-year-old son by this time, he thought: “This can’t go on.”

Finally, he was diagnosed with work-related PTSD. “That was a huge weight off my shoulders. It finally made sense.” 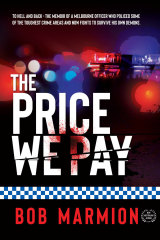 The Price We Pay by Bob Marmion.Credit:

His recovery was not a steady climb. There were wins and losses along the way. He had his stomach stapled, rediscovered exercise, lost 40 kilos, remarried, studied at university and emerged with a PhD. Dr Bob Marmion is now an author and historian.

He is training as a peer support officer for police veterans to help serving and ex-police processing their own stress. “It is time to give something back,” he says. “I want the families of police veterans to understand what some are going through.”

The Price We Pay by Bob Marmion is available from Shawline Publishing Group.