The last Dambuster: His Lancaster crew endured nine abortive runs before bomb aimer ‘Johnny’ Johnson – who has died at the age of 101 – unleashed the payload to write their names into history

Of all the RAF’s heroic exploits in the Second World War, none were more daring than the Dambusters raid. Carried out by moonlight on the night of May 17, 1943, the successful attack by the elite crews of 617 Squadron on a vital part of the Nazis’ infrastructure has passed into legend for its valour and ingenuity.

Bold in its conception, magnificent in its execution, 617’s triumphant mission was one of the turning points of the war, for it showed Hitler’s regime was not invincible.

Now the final remaining link to that epic of wartime courage has been broken. Our nation has lost the last crewman who took part in that spectacular assault on the Reich, which became an inspirational symbol of British defiance.

At the age of 101, Squadron Leader George Leonard ‘Johnny’ Johnson has died, nearly 80 years after he took part in the raid as a bomb aimer in one of the 19 Avro Lancasters that were charged with smashing a trio of dams in the Ruhr valley, the industrial heart of Germany.

Lying on his stomach at the front of the plane, finger poised on the bomb-release mechanism, Johnson had the heavy responsibility of choosing the moment to drop the Lancaster’s deadly cargo. 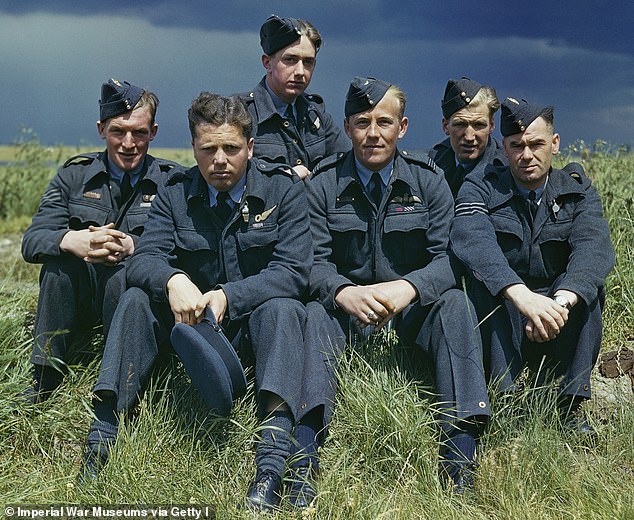 At the age of 101, Squadron Leader George Leonard ‘Johnny’ Johnson (pictured with his Lancaster crew after the dams raid) has died

It required tremendous nerve, steadiness and judgment, particularly when enemy fire grew in intensity as the Lancaster approached its target. But those were qualities that Johnson had in abundance, even though he was aged just 22 at the time.

‘What was going on didn’t bother me in the least,’ he recalled, revealing the extraordinary indifference to danger that characterised the men of Bomber Command.

‘My job was to get that bomb as near as possible to that mark. I was concentrating on that.’

At the centre of the raid, codenamed Operation Chastise, was the ‘bouncing bomb’ designed by Barnes Wallis, the pioneering aeronautical engineer at the Vickers company.

This cylindrical weapon aimed to evade the strong underwater netting designed to repel torpedo attack, by skipping across the reservoir like a thrown pebble before exploding at the mighty wall of each targeted dam: the Mohne, the Eder and the Sorpe.

Such an audacious innovation required both a special plane to carry it and courageous, skilful men to drop it in exactly the right spot. 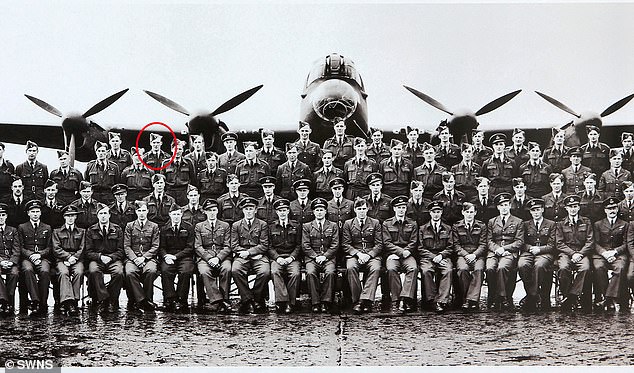 Carried out by moonlight on the night of May 17, 1943, the successful attack by the elite crews of 617 Squadron (pictured) on a vital part of the Nazis’ infrastructure has passed into legend for its valour and ingenuity

This was precision aerial bombing on a scale never attempted before. The four-engined Avro Lancaster bomber was the ideal aircraft. It was both highly manoeuvrable — necessary for flying at the very low level of 60 feet — and had a huge loading capacity due to its large bomb bay, originally designed for torpedoes.

The crews were equally suited for their role in 617 Squadron, which was specially created for the Dams raid. They were hand-picked by Wing Commander Guy Gibson, a fearless, uncompromising leader who had a ferocious work ethic and rigorous standards. 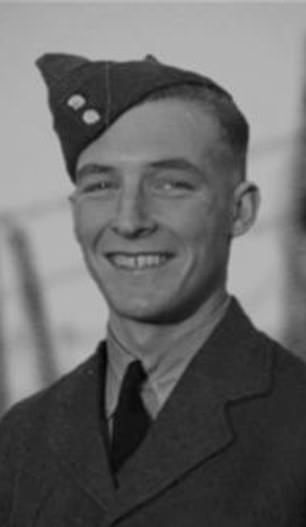 Nerve, steadiness and judgment were qualities that Johnson (pictured) had in abundance, even though he was aged just 22 at the time

Johnson had been in 97 Squadron serving with warm-hearted, self-confident American pilot Joe McCarthy, known as ‘Big Joe’, when he and the rest of his Lancaster crew were signed up for 617 in early 1943. Initially they were not told the purpose of their mission.

Once the raid was underway, Johnson showed exactly the kind of determination and concentration that appealed to Gibson. He and McCarthy were part of a unit ordered to hit the Sorpe dam, which the RAF knew would be the most difficult to breach because of its construction, a concrete core in a huge earth rampart.

The thickness of the dam wall was too great even against an 8,500lb bomb spinning across the water, so the most damage could be caused by a hit from directly above.

Having sighted the target, McCarthy took his plane down to 60 feet and Johnson, lying in the Perspex blister in the Lancaster’s nose, prepared for action.

But he was not going to release his bomb until he was satisfied with his height, speed and direction. On his instructions, the Lancaster made nine abortive runs before he finally let the bomb go.

‘Bomb gone,’ he called out, only to hear a voice from the rear of the plane: ‘Thank Christ for that.’ 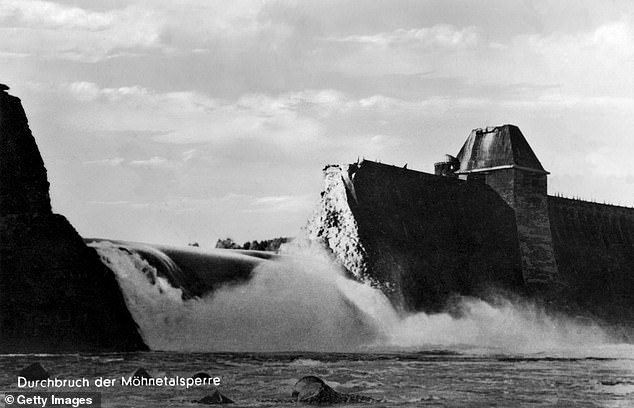 The ‘bouncing bomb’ aimed to evade the strong underwater netting designed to repel torpedo attack, by skipping across the reservoir like a thrown pebble before exploding at the mighty wall of each targeted dam: the Mohne (pictured), the Eder and the Sorpe

Johnson knew the nine dummy runs had cranked up the tension inside the Lancaster, but ‘there was no point in not doing the job properly’. He had got his timing right, and, as McCarthy’s plane sped away, the crew saw a vast column of water shoot into the air while the top of the dam crumbled.

Unfortunately the damage was only superficial and only one other Lancaster was able to make a further attack on the Sorpe, though without any impact.

But the other two waves had brilliantly succeeded in busting both the Mohne and the Eder dams, causing ‘unparalleled devastation’ to use the words of Winston Churchill.

On their return to their base in Lincolnshire, the 617 crews were immediately treated as national heroes as the Allies exploited the propaganda value of the raid.

A reception was laid on at Buckingham Palace; Gibson was awarded the Victoria Cross and 33 other medals were given to men of 617, including a Distinguished Flying Medal for Johnson. 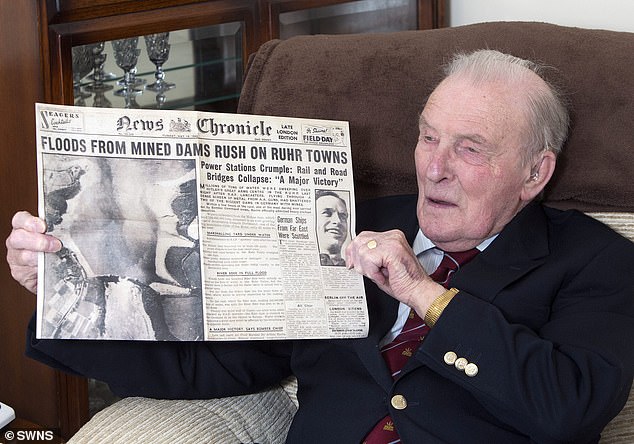 Bold in its conception, magnificent in its execution, 617’s triumphant mission was one of the turning points of the war, for it showed Hitler’s regime was not invincible

But the success had come at a high price, with 53 of the 133 crew killed, three taken prisoner and eight Lancasters lost.

For some, this price was too high. Sir Arthur Harris, the head of Bomber Command, regarded the raid as a tiresome distraction.

When the idea of the bouncing bomb was first put to him, he called it ‘tripe beyond the wildest description’ and ‘just about the maddest proposition we have ever come across’.

He never abandoned that outlook, claiming the raid was ‘a wild goose chase’ that achieved little at a heavy cost. In subsequent decades, many revisionist historians have followed this line.

But Johnny Johnson rightly objected to the attempt to downplay the consequences of the raid. He pointed out the subsequent flooding in the Ruhr caused severe damage to German industry, while the repair of the dams required the Germans to transfer huge amounts of labour which could have been used on other tasks like constructing defences in northern France. 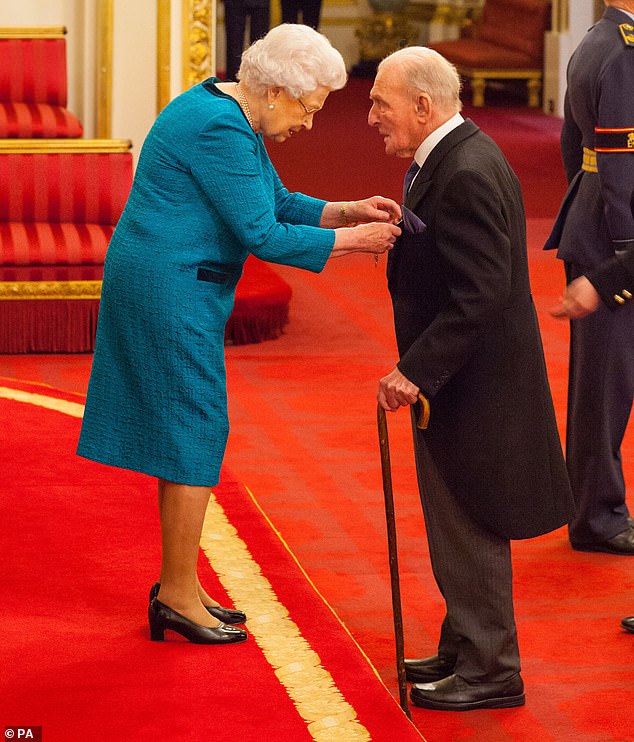 Moreover, the raid had given a huge boost to Allied morale, always a vital ingredient in war.

Johnson’s toughness partly reflected his upbringing. Born in 1921 in Lincolnshire, he grew up in comparative poverty as the son of a farm foreman. The family cottage had no electricity or running water, he lost his mother when he was just two and he was frequently beaten with a leather strap by his father.

But at the age of 11, he managed to escape this bleak environment when he became a boarder at an agricultural college run by a charity for the children of farming families. Flourishing academically and on the sports field, he left school in December 1939 to become a park-keeper in Hampshire. 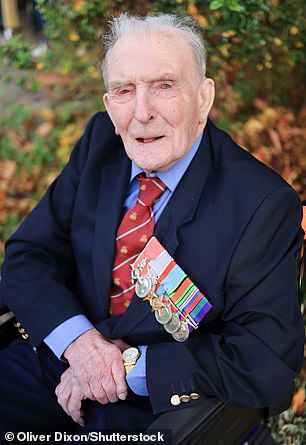 After the war, Johnson stayed on in the RAF until 1962, rising to the rank of Squadron Leader

But the war brought a halt to civilian life. He enrolled in the RAF and was selected as a bomb aimer in 1942. He undertook 50 combat missions throughout the war.

Johnson was part of a unique generation in whose bravery lay the defeat of tyranny. Despite their daunting odds of survival — more than half of the 125,000 who served in Bomber Command were killed in action — the crews never flinched.

Cowardice, known as ‘Lack of Moral Fibre’, was rare, while acts of astounding courage were frequent.

He had married Gwyn Morgan in 1943, shortly before the Dambusters raid, and they went on to have three children.

After the war, Johnson stayed on in the RAF until 1962, rising to the rank of Squadron Leader, and then became a teacher, working in primary schools, adult education and, for a time, in a high security psychiatric hospital.

On his retirement to Torquay with Gwyn, he became an active Conservative councillor before he stood down from public life in 2005. He was given an MBE in 2017.

With typical modesty, he said that the medal was ‘as much honour as I could expect’. And with typical selflessness, he dedicated the award to the 53 men who died on the Dambusters’ raid.

Britain has lost a very special man, whose contribution to our history should never be forgotten.