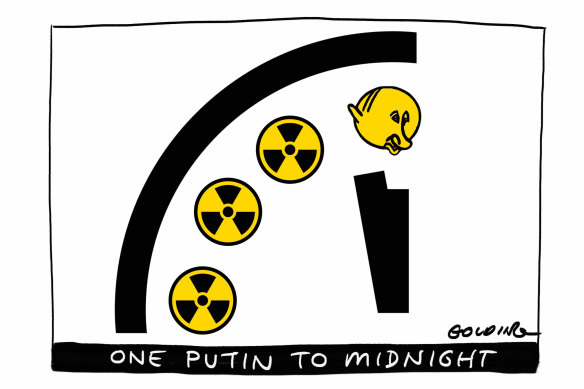 Gillard fought an election and formed a government in a hung parliament that steered through legislation establishing the NDIS, the NBN and a carbon-pricing mechanism (it wasn’t a tax).

Truss has taken leadership of a discredited government, has minimal support within her own party – a party that all polling says has minimal support – and within a month, her first policy decision has come close to plunging the UK into recession and collapsing the pension industry.
Comparable? Hardly.
Mick Cahill, Fitzroy North

Trust in short supply
The sacking of Brett Ratten as coach of the Saints clearly shows that both trust and competence are in short supply at the St Kilda Football Club.

And it’s not the departing coach who lacks these essentials but the board and executive of the club. What a disgraceful decision.
Peter Cowan, Mount Evelyn

The diamond stands as an object of pride for Indians, it belongs to India and it must be returned to India. It was acquired by force in imperial times and presented to Queen Victoria.

It should be a source of shame and embarrassment for the monarchy to continue to hold it, and to wear it must be considered a studied insult to India.
Bill Mathew, Parkville

No one’s being cancelled
Barney Zwartz, writing that “it seems that faith is not only unacceptable, but now must be cancelled, in the public arena” (Faith, The Sunday Age, 9/10), makes the same mischaracterisation of events surrounding the appointment of Andrew Thorburn as chief executive of the Essendon Football Club as Thorburn does himself.

No one is being cancelled for their beliefs. Rather, these events reflect the simple fact of it being impossible to be a leader of two organisations with contradictory beliefs and goals.

I can be the chief executive of Greenpeace and I can captain a Japanese whaling ship, but nobody would expect the same person to be hired to perform both roles at the same time.

Reframing this clash of roles as a clash of beliefs is a dishonest attempt to manufacture outrage.
Lewis Gurr-Stephen, Thornbury

The true imperative
Your far-sighted editorial emphasises the climate change-caused weather extremes, and the importance of pro-action including care in flood/fire prone areas and a new national insurance system (“We need to plan before the floods and fires hit”, The Age, 15/10).

But the biggest action our government must take is speedy, broad decarbonising here, plus donating to help poorer countries obtain clean energy.

The Albanese government must get real about doing these measures now. That is the true, over-riding imperative.
Barbara Fraser, Burwood

Fix bulk-billing problem
If the government is serious about improving healthcare and access to it, it will increase the Medicare rebate for bulk billing as a matter of urgency.

Fancy new hospitals are well and good, but GPs provide gatekeeper services to good, efficient, basic healthcare.
People trust their GPs. They would prefer to go to someone whom they know and who has their whole medical history.

This applies particularly to people in regional areas who do not have swift access to various specialists. Many GPs, particularly in areas with residents experiencing low income, are not able to earn a decent living with the existing bulk-billing amounts. In other areas, GPs are forced to charge fees which may deter some patients from returning. The problem needs a swift rethink.
Jan Marshall, Brighton

Life’s true goals
What an uplifting story from Samuel Johnson regarding his accident and recovery (“A long road, but life tastes sweeter”, Comment, 14/10).

Life isn’t all about achievement, status and money. Life is about happiness, contentment, families and friends. It can take some time to get there, some never get there, but he shows us that losing at times can be better than winning.

Samuel, your name will be remembered in the future for more than being a tennis match champion. You are a life champion.
Paul Burchill, Carlton North

We expect better
Your correspondent (“Perspective, please”, Letters, 15/10) decries the criticisms of an earlier correspondent, who complained of the bombings of Hamburg, Dresden, Hiroshima and Nagasaki by the Allies in World War II, by comparing those atrocities to those of Hitler.

What the writer has overlooked perhaps is that Hitler’s atrocities were perpetrated by our enemy, while the bombings of Germany and Japan were by our allies.

One expects atrocities from the enemy, but not from allies. We are supposed to stand on the higher moral ground.
Ian Usman Lewis, Kentucky, NSW

Michael Bachelard sends an exclusive newsletter to subscribers each week. Sign up to receive his Note from the Editor.