Tens of thousands of immigrants are calling time on Australia and heading back overseas because of the prolonged border closure and uncertainty over when they will see their loved ones again.

Department of Home Affairs figures show that between July 2020 and May this year, 34,200 residents left Australia with the intention to be away for more than a year.

That included 20,933 Australian citizens (including dual nationals) and 13,267 non-citizen residents (including permanent residents and long-term visa holders). The trend is growing, with long-term resident departures averaging 3500 a month so far this year, compared with 2780 a month last year. 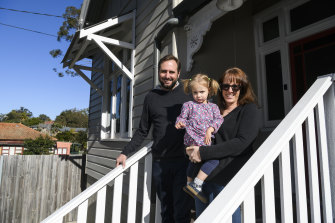 Marissa Parkin, Ian Stephen and their daughter Zadie will move to Britain as there is “no end in sight” for Australia’s restrictions.Credit:Rhett Wyman

Social researcher Mark McCrindle said Sydney and Melbourne were global cities filled with educated professionals from around the world who were used to being able to fly in and out. “Until we open up again, these global professionals are finding Australia is not compatible with their particular lives,” he said.

The Sun-Herald and The Sunday Age have heard from dozens of foreign expats, mostly from Europe and the United States, who have decided to return to those countries to be closer to family. Among them is Katy Stephenson, who recently featured in a story about a surge in applications for travel exemptions, having been refused permission for either her mother to visit or to visit her mother after complications from a difficult birth.

Many others say they would “move in a heartbeat” but feel “stuck” because they married an Australian and have children here.

German-Australian woman Daniella May has captured the sentiments of many in a protest song based on a Sarah Blasko song that is picking up steam on YouTube and Instagram.

Measures to fight the pandemic include a travel ban that prevents Australian citizens and permanent residents from leaving the country and foreign nationals from entering, unless they obtain a travel exemption from Australian Border Force.

Immediate family members of Australian citizens and permanent residents do not require an exemption to enter Australia, but unlike many other countries the definition of “immediate family” does not include the relationship between parents and adult offspring.

Meanwhile, many people are separated from partners too. While the definition includes a spouse or de facto partner, many relationships that were new when the pandemic started, including people holding prospective marriage visas, don’t meet the criteria.

Prime Minister Scott Morrison recently announced a four-phase plan to reopen the country based on vaccination targets, including reopening the international border and ending the use of lockdowns.

This was the last straw for US-born Marissa Parkin because it confirmed for her that there was “no end in sight”.

“If you read between the lines of this four-phase plan, the language is ‘it may include this, it may include that’; none if it is ironclad and none of it is guaranteed,” said Ms Parkin, from Thornleigh in northern Sydney. “Free movement has always been what makes living here work for us.”

Ms Parkin and her British husband Ian Stephen have lived in Australia for nearly eight years and their daughter was born here. They became citizens in May 2019 and planned to stay here forever. Instead, they have sold their house and in two weeks will move to Britain.

Mr Stephen, a university academic, is taking a huge pay cut for a role in the UK while Ms Parkin has been able to transfer her marketing job.

“It’s getting very close and it’s definitely the case that the closer we get, the sadder I am, but I don’t think either one of us has had a single moment where we’ve regretted our decision,” Ms Parkin said. “Based on the information that we have, we’ve made the best decision for our family.”

Ms Parkin said the “real kicker” in Mr Morrison’s plan was it only discussed allowing Australians to travel overseas and travel bubbles with low-risk countries, and didn’t give any real timeline for allowing foreign visitors in. While she and her husband and their two-year-old daughter could make a short overseas trip once a year, their parents are retired and have the time and money to come here more often and for longer periods of time.

Ms Parkin said the “brain drain is coming” for Australia. She knows several other friends in highly skilled jobs who are also leaving, including one set of friends who became citizens this week and will leave Australia permanently in three weeks’ time. 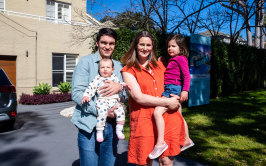 Selling up and leaving Australia: Lisa and Diarmaid Connolly with their children Alex and Izzy in Oyster Bay.Credit:Edwina Pickles

Lisa and Diarmaid Connolly are another couple who had planned to live in Australia permanently but are now leaving, with flights booked for late September.

They have sold their house in Oyster Bay in Sydney’s Sutherland Shire – which they thought would be their “forever home” – and are returning to Ireland with their children Alex, 4, and Izzy, 8 months. If the lockdown is extended they may have to leave without saying goodbye to friends and family in Australia.

The Connollys have lived here for nine years and became Australian citizens in January 2020. Before the pandemic, both sets of parents would spend the northern winter in Sydney and Ms Connolly said it was a “no brainer” that parents should be considered immediate family, given the importance of grandparents in children’s lives.

While she agreed with the border closure 18 months ago to buy Australia time to get ahead of the virus, she has changed her mind.

“They were buying themselves an opportunity to get ahead of it but I don’t really know what they did for 18 months – how is everybody not vaccinated already?” she said.

Stay across the most crucial developments related to the pandemic with the Coronavirus Update. Sign up to receive the weekly newsletter.