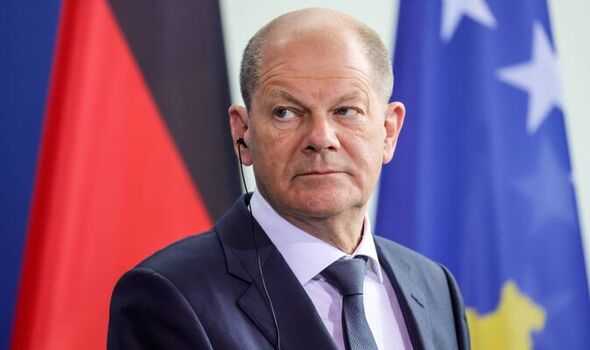 Speaking on Wednesday, Mr Scholz said Germans were angry with Ukraine after Kyiv snubbed its President Frank-Walter Steinmeier, when it asked him not to visit the capital. Several other Western leaders have visited Kyiv in a show of support for Ukraine including Prime Minister Boris Johnson.

He added Ukraine must play its part to help repair diplomatic relations.

It’s not the first time the ambassador has taken aim at the Chancellor. Earlier this week, he reminded Mr Scholz that Ukraine was facing a “brutal war of extermination” and told him “it is not a kindergarten”.

The comments come after Mr Scholz hinted he wouldn’t be visiting Kyiv in the near future following the snub.

Melnyk, who has been Ukraine’s ambassador to Germany since 2015, has been an outspoken critic of the German Government since the war broke out in Ukraine in February.

He has previously stated Germany’s military aid to Ukraine was “not enough”.

Mr Merz has been critical of the Social-Democrat (SPU)-led Government for dragging its feet on providing heavy weapons to Ukraine.

It has, however, performed a U-turn and has since become one of the largest weapons providers for the Ukrainian war effort.

The German Government has also announced it will supply Ukraine with heavy weapons including anti-aircraft guns mounted on tanks.

There have been claims, too, that Germany has been slow to agree to sanctions against Russia, specifically sanctions targeting the energy sector.

Germany has resisted calls to ban Russian imports of natural gas, claiming it would cripple the German economy, however, it has supported a proposed EU-wide ban on Russian oil.

Last month, German Finance Minister Christian Linder said: “It is clear we must end as quickly as possible all economic ties to Russia.

“We must plan tough sanctions, but gas cannot be substituted in the short term. We would inflict more damage on ourselves than on them.”