When there’s ground meat in the fridge and beans in the pantry, dinner almost cooks itself into a big pot of chili, the ingredients simmering together as if they had wills of their own. I make chili so often that not making it when everything is on hand feels like a betrayal of the muscle memory I’ve built up over many tomato-splattered years.

But as much as I adore a spicy bowl of chili, there are nights when I’d rather have soup. Especially when I’ve got a bright, vegetable-focused soup on my mind, one that’s filled with white beans and winter greens, spiked with ginger and red-pepper flakes, and rounded out with only a little ground turkey. 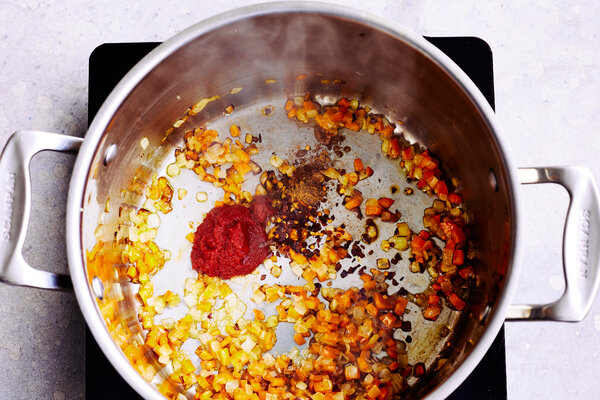 A soup like this is sharp and lemony where chili is deep and fiery; it’s brothy and pale instead of ruddy and thick. But it’s piquant, cozy and hearty in exactly the same satisfying way. And, because it doesn’t need to simmer for very long to meld the flavors, it’s a lot quicker, too.

Like chili, this soup is supremely adaptable. You can use whatever ground meat, beans and greens you have. You can even mix and match, adding a can of white beans and a can of chickpeas if that’s what’s on the shelf. You can use ground chicken, pork, beef or vegan meat instead of turkey. And any greens, from tender spinach to sturdy collards, will find a happy place in the pot.

Your choice of greens may require some simple, intuitive finessing. Thicker, more leathery greens (collards, kale, cabbage) need longer to cook than delicate spinach, baby mustard and tatsoi. If the broth condenses too much while the greens simmer, you can add a little water to thin it out.

Or then again, maybe a thicker broth is what you’re craving. Aid your cause by smashing up some of the beans so they release their starch as they simmer. This makes the broth silky and rich.

Whether thick or thin, make sure to finish the soup with loads of fresh lemon juice. Add it to taste, and stop only when the broth has a lively zing that cuts through the plushiness of the beans.

For chili fans, lemon does the same job as a dollop of tangy sour cream. But the citrus is fresher, and more in keeping with the lighter vibe of this still delightfully warming winter soup.